Don’t Be Fooled by the Indices

Last week, all three of the major U.S. stock market indices hit record highs. But certain cross-currents lurk beneath the surface that should make you cautious.

Any day now, the Dow Jones Industrial Average is likely to cross above 30,000 for the first time in history. Likewise, the tech-heavy NASDAQ composite is close to making its first move above 10,000. The S&P 500 index broke through the 3,000 mark four months ago and is now more than 10% higher than that. 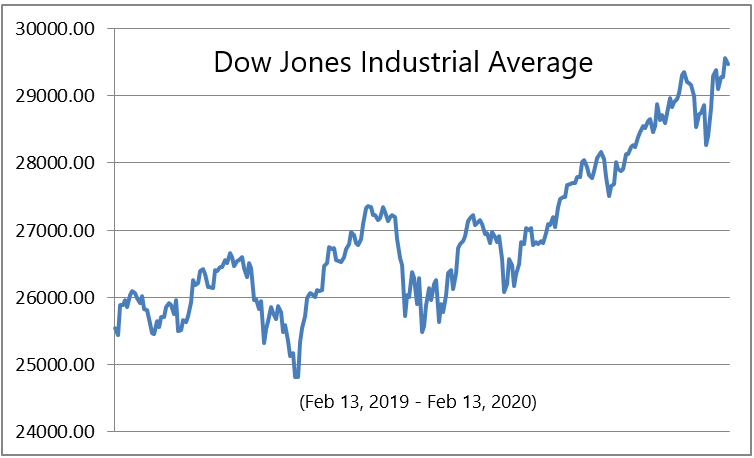 Based on those numbers, it appears that the coronavirus poses little threat to the American economy. Most companies in the United States have a sizable amount of direct or indirect exposure to China. If China’s economy hits the skids, revenues and profits for most large-cap stocks could take a dive. Normally, that fear alone would send their share prices tumbling.

However, the fact that hasn’t happened doesn’t mean there is no fear in the market. Not that long ago, most investors would react emotionally to an unexpected event like the virus. They would panic and sell their stocks at any price. Not any more. These days, more investors are being rational. Instead of selling their stock, they are using options as a means of protecting against downside risk.

It makes sense. Rather than sell a stock, it can be cheaper in the long run to buy a put option on it instead (a put option increases in value as the price of the underlying stock decreases). When you sell a stock, you realize whatever profit you may have in it. That also means you must pay capital gains taxes on that gain. However, if you hold onto the stock and buy a put option, the gain is not realized and no tax is due.

The maximum long-term capital gains rate is 20%, provided you have held that stock for at least a year. Short-term capital gains are taxed at the same rate as your income, which can run as high as 37%. For that reason alone, many wealthy investors will not close out profitable stock positions held less than a year.

Given the magnitude of the gains in many stocks, paying taxes at the long-term rate can be expensive. Let’s say you’re one of the lucky ones that just doubled your money in Apple (NSDQ: AAPL) after buying it at $160 a little over a year ago. Even at the reduced capital gains rate, selling it now could cost you as much as $33 per share in taxes.

Last week while AAPL was trading at $325, a put option that expires in seven months at a strike price of $300 could be bought for $14. That is less than half of the capital gains tax you would pay if you simply sold it.

If Apple tanks and that put option is exercised against you, you will also owe the capital gains tax on your gain. In that happens, you would have been better off selling the stock at its peak price and never buying the put option in the first place.

Most investors are optimists. They are inclined to assume that the coronavirus will fizzle out. If so, the global economy should remain on track and help push Apple higher. In that case, you would be better off holding onto the stock and eating the cost of the put option premium.

That appears to be what many investors are doing as evidenced by the “implied volatility” of put options. Implied volatility is a mathematical measure of the degree to which a stock is expected to deviate from its current price based on the price of premiums for call and put options on that stock.

Of course, all stocks are assumed to possess the potential for some amount of volatility. As a rule, I won’t buy an option with an implied volatility of more than 25%. That’s because the cost of the premium becomes too high for me to feel comfortable taking the risk that the option might expire worthless if I turn out to be wrong.

The fact that investors are now paying more than twice that amount for option premiums tells me there is plenty of fear in the market. However, you won’t hear about that from the mainstream media outlets. It is a difficult concept to comprehend and even harder to quantify in a simple metric.

You need to be cautious. The pros on Wall Street have tools at their disposal that allow them to manage risk in a way that you can’t. While they continue to buy stocks and push their prices (and the indices) higher, they are also buying put options in case the market comes crashing down.

Editor’s Note: As my colleague Jim Pearce just explained, don’t be fooled by the indices. He can steer you toward safer ways to make money, without taking enormous risks.

Jim Pearce is the chief investment strategist of our flagship publication, Personal Finance. As consolidation and rapid technological change wrack the media industry, many investors have been asking him: What replaces cable TV? What comes after “cord-cutting”? Who will win the so-called Streaming Wars? And more to the point, how can they get rich from these trends?

Those are all good questions and Jim has made it his job to answer them. Jim has pinpointed a trade to profit from the Streaming Wars, but you must act now. Click here for details.