Just how much is a good CEO worth to a company? That question hasn’t gotten much attention lately due to surging stock values. When shareholders are earning double-digit returns, nobody wants to rock the boat.

Sooner or later the inevitable stock market correction will occur, perhaps later this year. And when it does, investors may take a closer look at just how much companies are spending on executive compensation. It appears that many companies are overpaying for underperformance.

Last year, Tesla (NSDQ: TSLA) founder and CEO Elon Musk earned $2.3 billion in salary and stock options. That means Musk got paid more than the entire $2.2 billion of earnings before interest, taxes, depreciation, and amortization (EBITDA) recorded by Tesla in 2019. That also means Musk was paid more than the next nine top-paid executives combined. 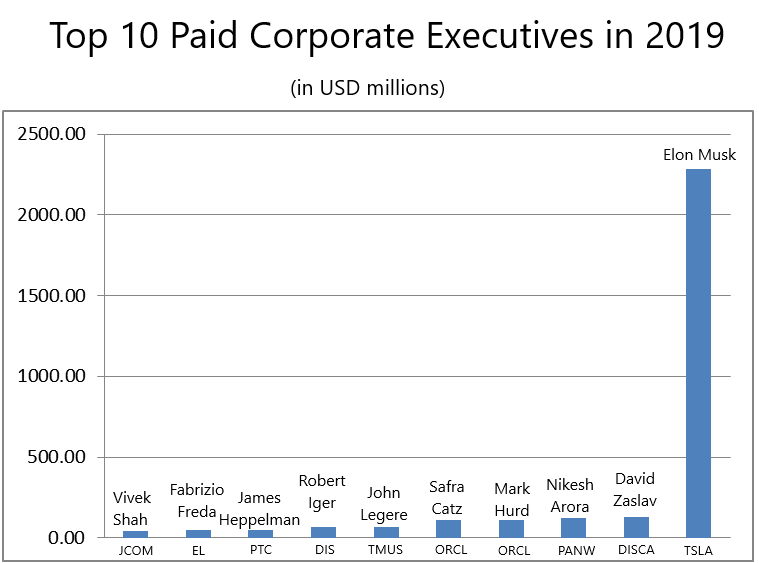 In fairness to Musk, almost none of that money was actually paid out to him. Most of it is in the form of stock options. He only gets paid if Tesla stock achieves specific goals.

Based on how Tesla stock has performed lately, it is safe to assume that he will receive all of his compensation. Over the past six months, TSLA has more than tripled in value.

Discovery will report its Q4 and full-year results on February 27. We’ll find out then exactly how much money the company made in 2019. In 2018, Discovery reported $6.4 billion in EBITDA or nearly 50 times what it paid Zaslav last year.

In that respect, Zaslav was a bargain compared to Musk. But if stock performance is the best way to measure the value of a CEO, then Apple (NSDQ: AAPL) CEO Tim Cook was a steal last year at $10.7 million in total compensation. In fact, Cook was not among the Top 10 in executive pay last year even though Apple is once again the most valuable company in the world after its share price gained 88% in 2019.

Perhaps the most overpaid executives last year relative to share price performance were Safra Catz and Mark Hurd of Oracle (NYSE: ORCL). Each was paid $108 million while Oracle’s share price returned 18.7% in 2019. That’s nearly half the 34.8% gain in the tech-heavy NASDAQ Composite Index last year.

If you don’t think a respected CEO is worth a lot of money, consider recent events at International Business Machines (NYSE: IBM). On January 30, the company announced that Arvind Krishna will replace Ginny Rometty as CEO on April 6. Over the next five trading days, IBM soared nearly 15%. 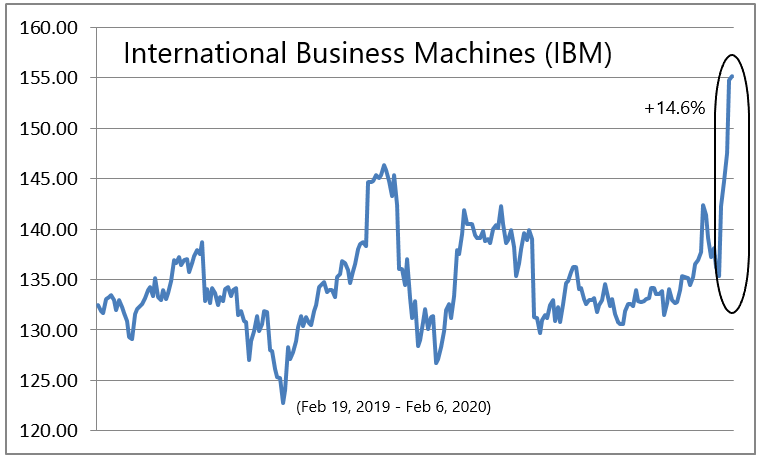 That increase in IBM’s share price raised its market cap by $20 billion in just one week. And it occurred for no reason other than the expectation that operating results will improve markedly under Krishna’s leadership.

Something similar happened with General Electric (NYSE: GE) when it replaced its CEO in October 2018. Shares of GE jumped 20% in a week on the news that highly regarded private equity manager Larry Culp would take over the struggling conglomerate.

The subject of executive pay has become part of a broader discussion on wealth inequality. Several Democratic presidential candidates have noted that the top 1% of the U.S. population controls more wealth than the bottom 90%. That topic is sure to come up during the presidential debates this fall, putting many corporate executives in an unwanted spotlight.

Increasingly, the wealthiest 1% consists of highly compensated executives of publicly traded companies. As Elon Musk recently observed, his identity of interest with respect to Tesla is more of an investor than an employee. Virtually all of his compensation is dependent on the performance of Tesla stock and not the company’s operating results.

For that reason, more companies will be monitoring executive compensation plans as part of their environmental, social and governance (ESG) policies. How much pay is fair, or necessary, to retain a top-performing executive may be impossible to quantify but it’s necessary to debate.

Industry studies have confirmed that executive pay does not correlate highly to share price performance. If anything, the opposite is the case. Executives with comp plans heavy on stock options are reaping the rewards of a runaway bull market.

That may soon end. And when it does, don’t be surprised if executive compensation is one of the first items on the agenda at companies looking to cut expenses. That may be when we find out just how much a good executive is really worth.

Editor’s Note: As the above article just explained, many corporate CEOs are overpaid. We’ll see how this disconnect between managerial compensation and performance shakes out this year, if and when the stock market finally undergoes a correction.

Regardless, the tried and true methods for scoring big profits in the stock market will continue to hold sway. An expert in these methods is our colleague, Jimmy Butts.

Getting in on the ground floor means you can buy these stocks at bargain prices and watch your stake soar before the rest of the investment herd catches on. For Jimmy’s latest “contrarian” value plays, click here now.