Will Uncle Sam Ever Embrace Weed?

Prohibition during the 1920s didn’t stop Americans from drinking alcohol. Indeed, it spawned a freewheeling era of gangsterism and speakeasies, all devoted to satisfying society’s unquenchable thirst for booze. Prohibition made Al Capone rich and gave birth to the legendary exploits of The Untouchables (which in turn became my favorite TV show when I was a kid).

Fast forward to the 2020s. A different intoxicant, called marijuana, is popular with the public but banned by the feds. More than half of U.S. states have passed some form of marijuana legalization, but Uncle Sam still says “no” to Mary Jane.

If cannabis is ever legalized on the federal level, investors in the sector would enjoy a second wave of phenomenal growth. But over the short term, is the lifting of the federal ban on marijuana an obtainable goal?

It’s useful for marijuana investors to explore the historical parallels between alcohol prohibition in the 1920s and pot prohibition today.

The 18th Amendment to the U.S. Constitution called for the banning of the manufacture, sale, or transportation of alcoholic beverages. Written into law on January 16, 1920, the period known as “Prohibition” lasted almost 14 years, until December 5, 1933, when the law was repealed via the adoption of the 21st Amendment.

The 18th Amendment is the only amendment to ever get removed from the Constitution. In 1933, the newly elected Franklin D. Roosevelt signed the legislation repealing the 18th Amendment, famously remarking, “I think this would be a good time for a beer.”

Repeal of prohibition was also an economic decision that generated thousands of new jobs at the nadir of the Great Depression. Marijuana legalization at the federal level would likewise galvanize business and job creation. Most likely, it would boost pot stocks, too.

During Prohibition, stocks of companies in the alcohol sector peaked in July 1933, a few months before the 18th Amendment was officially repealed. Back then, companies could sell alcohol for industrial purposes and distilleries such as the now defunct Seagram’s (at the time based in Canada) were of course free to make and sell booze outside of the U.S. In the months leading up to repeal, as the states were in the process of ratifying the 21st Amendment, the share prices of these companies soared, before plateauing when repeal actually happened.

The lesson for marijuana investors? Buy on the hope. And right now, there’s plenty of hope that the feds will eventually legalize pot. The question is, when.

Yes, I think the removal of the federal ban is inevitable. But it won’t happen this year. That said, legalization trends remain auspicious for investors. Let’s take a closer look at pot’s legal future on the federal level.

Tough cops in the Senate…

Medical marijuana is currently legal in 33 states and the District of Columbia. Recreational use is legal in 11 states and DC. By the end of 2020, nearly all U.S. states could end up allowing some form of legal marijuana, including a few “deep red” states in the South.

There’s a time-proven political adage that nothing significant happens during election years, especially those as contentious as 2020. With politicians out in the hustings trying to garner votes, legislation (especially controversial proposals) are put on the back burner.

The conservative make-up of the U.S. Senate is another obstacle. GOP Senate Leader Mitch McConnell (R-KY) has earned the nickname “The Grim Reaper” because of his propensity to block legislation he doesn’t like (and he doesn’t like much). McConnell has expressed particular antipathy toward marijuana legalization.

This obstructionism flies in the face of public opinion. According to a recent Pew Research Center survey, two-thirds of Americans say the use of marijuana should be legal, reflecting a steady increase over the past decade (see chart). 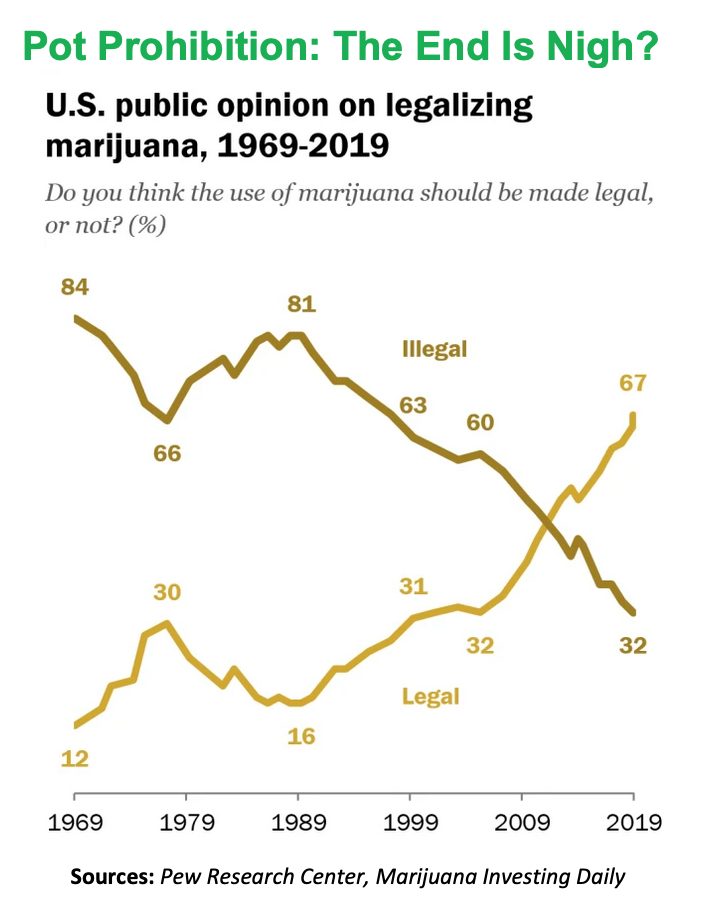 Several pieces of marijuana legislation are pending in Congress. Here’s a look at four major ones. They’re all stalled but certainly not dead. Circumstances more favorable to the passage of at least one of these bills are likely to develop.

The MORE Act would federally deschedule cannabis and expunge the records of those with previous marijuana convictions. MORE would impose a 5% tax on cannabis sales, the revenue from which would be reinvested in communities most harmed by the War on Drugs.

MORE also would expedite resentencing for people imprisoned for marijuana offenses, protect immigrants from being denied citizenship because of cannabis, and prevent federal agencies from blocking public benefits or security clearances due to its use. The bill is sponsored by Sen. Cory Booker (D-NJ) and has more than 50 co-sponsors.

Rep. Barbara Lee (D-CA) is the sponsor of the Veterans Medical Marijuana Safe Harbor Act, a bill that would make it legal under federal law for military veterans to “use, possess, or transport medical marijuana” in state-legal systems. It also would allow Department of Veterans Affairs doctors to issue medical cannabis recommendations to their patients.

The U.S. House last September passed the SAFE Banking Act, which is designed to protect banks that accept marijuana business clients from being penalized by federal regulators. The SAFE Act also would protect legalized states’ markets from federal prosecution.

SAFE still requires the approval of the U.S. Senate and President Trump to become law. The Senate and White House are controlled by Republicans, who are less marijuana-friendly than the Democrats who control the House. SAFE now finds itself mired in the Senate Banking Committee, where Sen. Mike Crapo (R-ID) heads the committee and is currently considering restrictions to the Act.

All four bills enjoy widespread, bipartisan support in Washington. However, anti-pot social conservatives hold outsized sway in the GOP, which controls the Senate and executive branch. When it comes to getting marijuana action in the Senate, McConnell holds the cards.

What’s more, partisan rancor between the Democrats and Republicans has deteriorated in the post-impeachment Congress. The constant political bickering has rendered deal-making and compromise extremely difficult on any piece of legislation, let along marijuana decriminalization.

State-level legalization already is fueling a bonanza and it’s still my view that the repeal of federal prohibition is inevitable. But don’t wait to leverage these facts. Start buying marijuana stocks now. The accelerating pace of legalization among the states indicates that the industry is poised for its next upward surge. In the meantime, the federal legalization of marijuana is not an “untouchable” goal.

For our team’s latest research on the best-positioned pot plays, click here.