Flu-Conomics: Markets Are Running a Fever

Television network producers in this country know that international news is bad for ratings, so they give it short shrift on newscasts. The beginning of a dispatch from a foreign city causes millions of American eyes to glaze over. That’s why we get lots of coverage of “Megxit,” but little coverage of “Brexit.”

I’ve seen this dynamic occur in my own home. The moment a news anchor says something like “In Beijing today…” the younger members of my family flee the room (or start playing Minecraft).

Let’s start with China, the world’s second-largest economy. The prognosis is grim.

China’s economy, the growth engine of the globe, is under serious threat from the coronavirus. Don’t underestimate the severity of the situation. The epidemic could push not just China but the global economy into recession.

The U.S. stock market is overvalued, with a disconnect between corporate earnings growth (lackluster, at best) and frothy equity valuations. Headlines about rising rates of infections and quarantines could provide the catalyst for a correction. Maybe the correction already is starting.

The three main U.S. stock market indices opened sharply lower Tuesday, on news that Apple (NSDQ: AAPL) was downgrading its quarterly revenue forecast, due to weakened demand in China as a result of the coronavirus outbreak. At the start of trading today, Apple shares were down by nearly 3%.

Many global companies rely on Chinese consumers, factories and supply chains. Apple is considered a global bellwether. Other firms are likely to make similar downgrades due to the virus.

Read This Story: Stocks: Bubble In Search of a Pin?

The prognosis for the virus has ebbed and waned. In recent days, the news has turned decidedly worse.

Fourteen Americans who tested positive for the coronavirus were evacuated from a cruise ship in Japan on Monday and flown to the U.S., where they were placed in isolation. With the arrival of the 14 infected passengers from Japan, confirmed coronavirus cases in the U.S. has nearly doubled, to 29. All 300 cruise ship passengers were eventually placed in quarantine.

As of this writing Tuesday morning, more than 72,000 people have been infected by the coronavirus worldwide and more than 1,800 have died. We’re even getting reports of infected people committing suicide.

Economic growth in Asia and Europe already had been slowing. The virus just makes matters worse.

The Land of the Rising Sun is in trouble. The world’s third-largest economy on Sunday released jaw-droppingly bad gross domestic product (GDP) figures that have renewed concerns about the prospects of the global economy in 2020.

Japan reported that GDP fell 6.3% year-over-year in the final quarter of 2019, substantially worse than the already bleak expectation of -3.7%. The fourth-quarter contraction was the first in five quarters, raising fears of global recession (see chart). 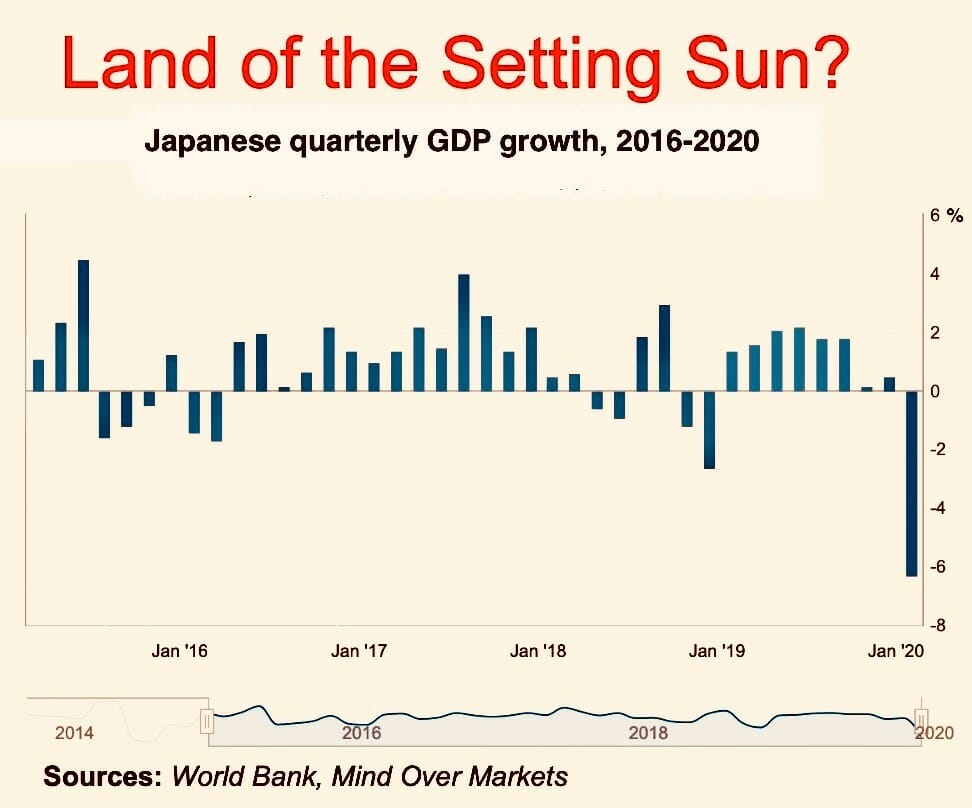 The main culprits for Japan’s economic contraction were a destructive typhoon and a sales tax hike. The Sino-American trade war also played a part in the horrific GDP data, because it’s clobbering capital spending and exports. Not surprisingly, the Nikkei 225 plunged more than 1% immediately after Sunday’s GDP report.

At the same time, manufacturing activity is slowing across Europe, especially in the Continental powerhouse of Germany.

Germany is export-driven and heavily relies on automobile manufacturing, a sector that has taken a hit because of the trade war. Exports only account for 12% of U.S. GDP but nearly 50% of Germany’s.

Germany reported last Friday that GDP growth flattened to zero percent in the final quarter of 2019. Germany’s growth rate in full-year 2019 slowed to 0.6%, the worst pace since 2013.

After declining by 0.1% percent in Q3 2018, German growth again slipped into the red in Q2 2019, posting quarter-over-quarter growth of -0.2%. The third quarter of 2019 witnessed a meager increase of 0.2%, but the level has fallen to zero for Q4. German officials said that the economy, Europe’s largest, remains in “a weak phase” (see chart). 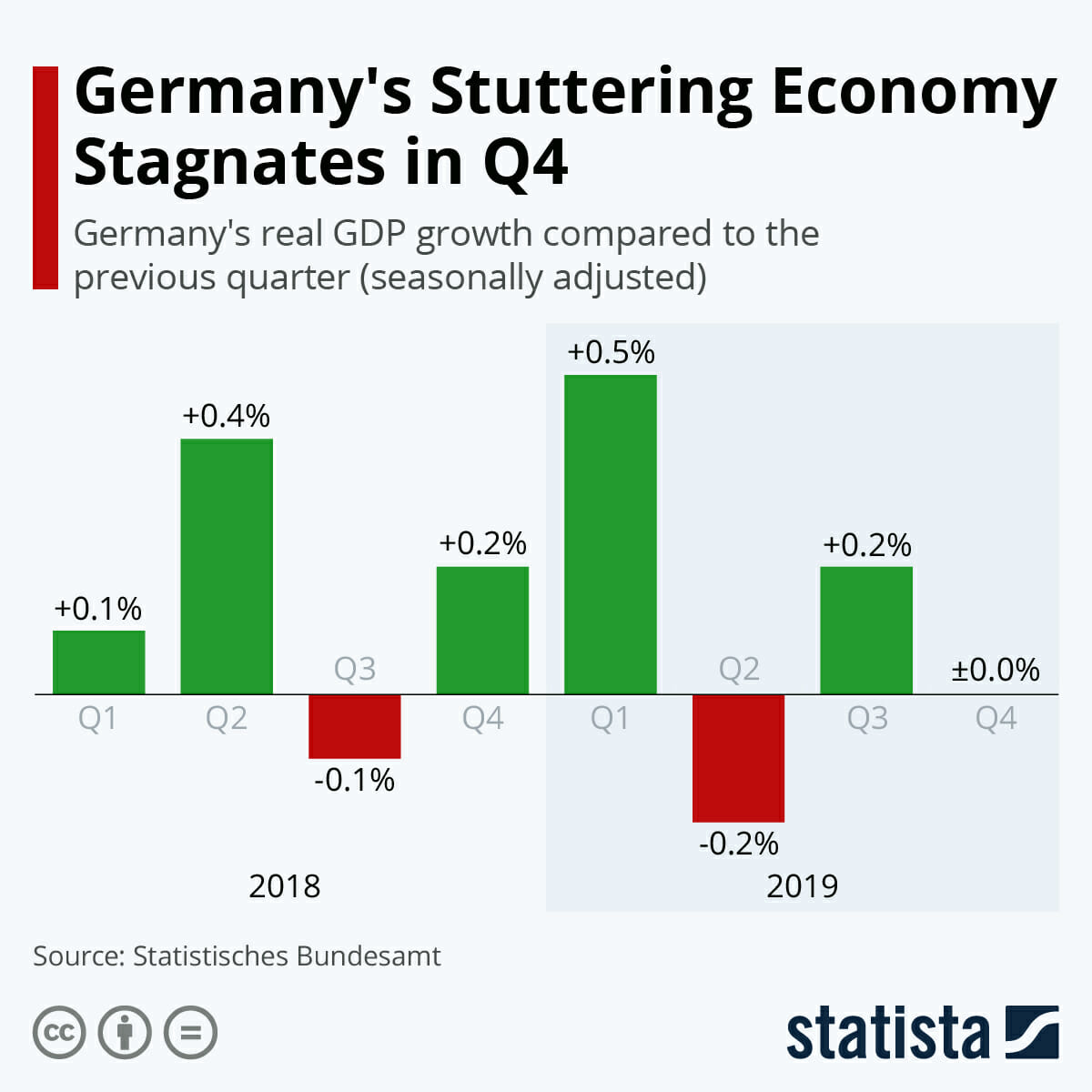 Overall, growth in the euro zone slowed to 0.1% in Q4, down from 0.3% in Q3. Britain’s departure from the European Union will further hurt growth in Europe.

The longer the coronavirus continues to infect and kill people, the greater the damage to important growth drivers such as China, Japan and Germany. This trend, in turn, will inevitably punish the U.S. economy and stock markets. Tuesday’s stock market swoon could be a harbinger.

How to beat the investment herd…

In the context of this uncertainty, you should be proactive and take decisive measures to simultaneously hedge your portfolio and profit. Consider pocketing at least partial gains from your biggest growth stock gainers; maintain exposure to precious metals (gold and/or silver) as part of your hedges; elevate cash levels; and use “stop loss” orders.

In addition to consumer staples, utilities make sense as well. Consumer staples and utilities are buffers against geopolitical risks such as the coronavirus; they’re also timely plays in this late stage of the economic cycle.

Another smart move is to pinpoint hidden gems that the investment herd has ignored. That’s where my colleague Jimmy Butts comes in.

Getting in on the ground floor means you can buy stock cheaply and watch your stake grow exponentially before the rest of the world catches on. For Jimmy’s latest under-the-radar plays, click here now.