Dispatches From The Weed Wars

I started my publishing career as a reporter on daily metropolitan newspapers, before the advent of the Internet, smartphones and laptops. Back then, I relied on a landline telephone, a spiral notebook and shoe leather.

I was trained to be skeptical. An editor in the newsroom once told me: “The only way to look at a politician is down.”

I’ve been thinking of those words lately, as I witness the brazen opportunism of politicians when it comes to marijuana legalization. I’ll get to that in a minute (and I’ll explain why it matters to marijuana investors).

On any issue of social importance, reform does not move in a linear fashion. Change arises from conflict.

Yes, marijuana legalization is a powerful trend. But the movement for the reform of marijuana laws isn’t proceeding in a smooth, straight line. The political tug-of-war will continue into the foreseeable future. Marijuana investors need to understand this reality. The industry will continue to enjoy political victories, but don’t get spooked by the inevitable setbacks. The status quo dies hard.

The contradictions of marijuana policy are starkly evident in the 2020 presidential race. Consider the two plutocrats from New York City, Michael Bloomberg and Donald Trump. We’ll start with Mr. Bloomberg, whose data terminals are ubiquitous in my profession.

Former New York City Mayor Michael Bloomberg (D), a presidential candidate, on February 18 released a criminal justice plan that includes decriminalizing marijuana, commuting sentences and expunging records. Bloomberg’s blueprint does not include federally legalizing cannabis. It says that decisions on cannabis laws should be left to the states.

Now that he’s officially in the 2020 presidential race, Bloomberg has dramatically changed his stance on marijuana legalization. Before launching his campaign last year, he said that legalizing marijuana is “perhaps the stupidest thing anybody has ever done” and “doesn’t make any sense at all.”

Causing embarrassment for Bloomberg in recent days is a 2015 recording of the former mayor discussing marijuana legalization:

“It is just a terrible, terrible idea… I just can’t imagine why society is doing this… If you’re my age, of course you smoked a joint in the 60s—but it was very different and just because we did doesn’t make it right… Today it’s much stronger and potentially much more damaging.

Yikes. As Ricky Ricardo used to say to Lucy: “You got some ‘splainin’ to do!”

Bloomberg has been furiously back-peddling ever since the recording unexpectedly surfaced in the media last week. The billionaire founder of the eponymous media empire knows which way the political winds are blowing…and those winds carry the pungent aroma of marijuana.

Legalizing marijuana is a popular idea with Democratic voters and now that he has switched parties, Bloomberg realizes it’s politically unviable to stand in the way of the green rush. Hence the liberal-minded criminal justice plan that he released on Tuesday.

And what about Trump?

During his 2016 campaign for president, Trump declared that states should have the right to manage their own policies with regard to medical and recreational marijuana. But that was during the general campaign, when the Republican Trump needed Democratic votes. Now that Trump is in power, it’s a different story.

A secret recording surfaced last month in which President Trump can be heard saying marijuana use makes people “lose IQ points.” He also lamented that “in Colorado they have more accidents” because of marijuana legalization in that state. Trump opposes federal legalization and administration officials have consistently spoken out against pot. The president’s political base includes social conservatives and evangelicals and these constituencies are not marijuana friendly. 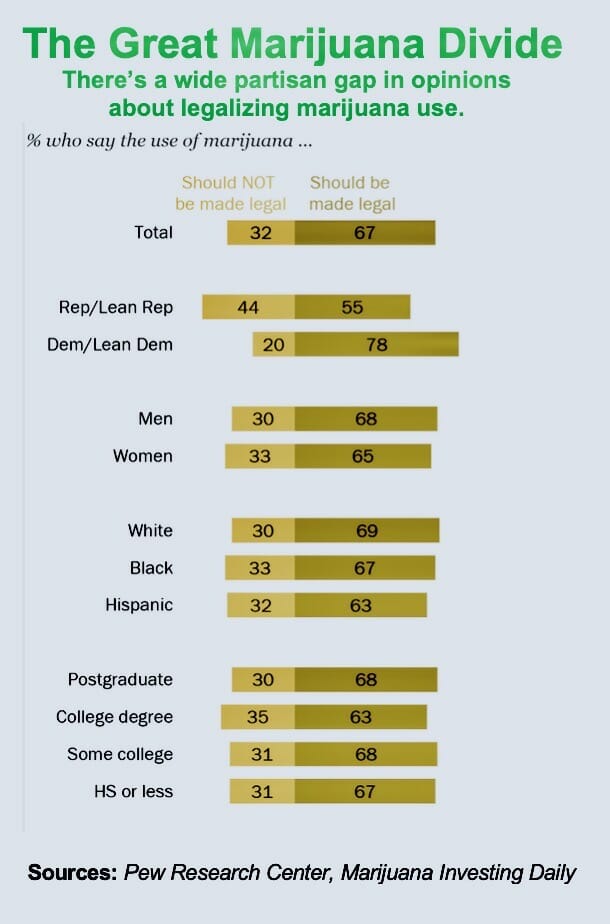 Bloomberg and former Vice President Joe Biden are the only two Democratic candidates in the 2020 presidential race who oppose federally legalizing cannabis.

Biden spouted some anti-pot rhetoric of his own at a political town hall last November, stating that he wants to see more data about the safety of marijuana use before embracing efforts to legalize it on the federal level.

Harking back to the bygone terminology of the War on Drugs, Biden used the term “gateway drug” to describe cannabis. His words sparked a fiercely negative response from most of the other Democratic candidates. Biden quickly retracted his gateway drug remark.

Both Bloomberg and Biden have recently softened their stances on pot. They don’t endorse lifting the federal ban but they’re voicing support for allowing states to set their own policies.

Politicians are flip-flopping on marijuana, either out of conviction or because they know that legalization is the way of the future. But the die-hard prohibitionists aren’t giving up without a fight.

GOP Senate Leader Mitch McConnell (R-KY) is an outspoken foe of marijuana legalization. Bills that are crucial to the industry, such as the SAFE Banking Act, are languishing because of McConnell’s obstructionism. He’s not alone in his antipathy toward pot. Some recent examples:

Rep. Steven Palazzo (R-MS) sent a press release on February 14 in which the Family Research Council praises him for voting to “reject the increasing acceptance of marijuana use.”

The New Mexico Senate Judiciary Committee on February 12 dealt a major procedural defeat to a marijuana legalization bill that Gov. Michelle Lujan Grisham (D) had deemed a priority for this year.

If approved, the legalization proposal would allow adults 21 and older to possess and purchase cannabis from licensed retailers. It also contains social justice provisions such as automatic expungements for prior cannabis possession convictions and funding for community reinvestment.

However, after the committee’s action, the bill is dead for 2020. Members of the committee have expressed opposition to marijuana legalization.

The upshot: If you want to make money in the marijuana sector, you need to pick investments that won’t get whipsawed by fickle political fortunes. Look for strong fundamentals and competitive advantages. The good news is, our investment team has done the homework for you. For our report on the best cannabis plays, click here now.

As for politicians and their views on marijuana, pay attention to what they do, not what they say.