The stock market right now reminds me of Ethan Hunt, the hero of the Mission: Impossible movie series. The first thing Ethan Hunt does when he walks into a room is look for escape routes, just in case.

Sure enough, when news about the coronavirus took a turn for the worse this week, investors sprinted like Tom Cruise for the exits. The three main U.S. stock market indices closed sharply lower Thursday, with the Dow Jones Industrial Average shedding more than 128 points. Investors fled to traditional safe havens such as utilities stocks, bonds and gold. Prices of gold rose to a seven-year high, settling 0.5% higher at $1,630.50 per ounce.

Stocks on Friday are poised to extend their losses, with the Dow down by about 100 points in pre-market futures trading. All three main indices are set to open today in the red.

Investors have been rudely shaken out of their complacency. Positive news about the U.S. economy has abruptly taken a back seat to the unexpected severity of the coronavirus. That’s why they call it a black swan. No one sees it coming.

Chinese officials reported Thursday a big spike in coronavirus cases in the country, which spooked investors and sent stocks tumbling. On Friday, Beijing reported yet another surge in coronavirus cases, sending global stock markets lower. Finance leaders from the Group of 20 major economies are scheduled to meet in Saudi Arabia over the weekend to discuss risks to the global economy stemming from the virus epidemic.

Investment bank Goldman Sachs (NYSE: GS) told clients this week: “In the nearer term…we believe the greater risk is that the impact of the coronavirus on earnings may well be underestimated in current stock prices, suggesting that the risks of a correction are high.”

It’s under conditions like these that the Midas metal shows its mettle. I’ve been advising readers to maintain an allocation in their portfolios of 5%-10% in gold, in the form of either gold mining stocks, exchange-traded funds (ETFs), or the physical bullion itself. If you have followed this advice, you’re sitting on some pretty nice gains. Gold has been on a tear over the past year and it probably has even further to run. Crises are manna for gold prices.

And make no mistake, the coronavirus outbreak is a full-blown crisis. The majority of cases are in mainland China, which has reported about 75,000 cases and 2,200 deaths. The virus is spreading to other countries, with South Korea getting hit hard.

Technology companies heavily depend on Chinese manufacturing and components, so it was predictable that the coronavirus (dubbed COVID-19) epidemic would adversely affect the quarterly guidance of several tech stalwarts, notably Apple (NSDQ: AAPL).

Chinese market research company TrendForce expects global smartphone production in the first quarter to be 10% lower than originally expected due to the COVID-19 epidemic. Research firm Statista released the followed chart Thursday and it paints a grim picture: 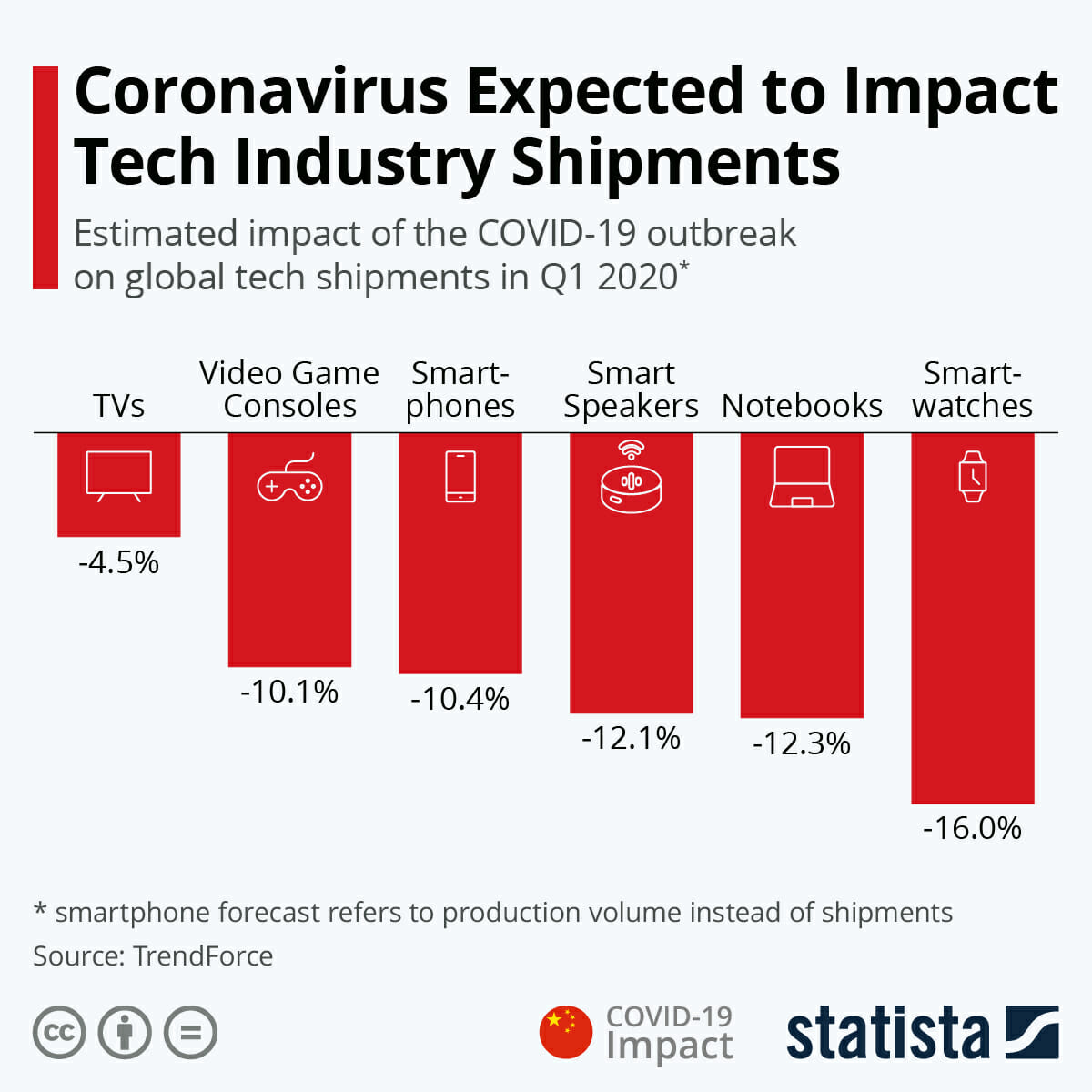 As you can see from the chart, it’s not just smartphones that will get clobbered. Smartwatches, notebooks, smart speakers and video game consoles are all expected to experience double-digit declines in unit shipments this quarter.

S&P Global Ratings warned in a report Thursday that it would downgrade China if the country went on a spending spree to counteract the economic headwinds from the coronavirus. The firm forecasts that because of the epidemic, Chinese gross domestic product (GDP) growth this year will come in at 5.0%, down from a previous forecast of 5.7%.

S&P Global Ratings also stated that because of coronavirus damage to the Chinese economy, Chinese lenders could get overwhelmed by $1.1 trillion in questionable loans.

We’re witnessing a health contagion that could turn into a financial contagion. Financial meltdowns invariably begin with an unexpected shock and then the dominoes start to fall. A classic domino is excessive debt.

China’s total debt now exceeds 300% of GDP, an astronomical number. To be fair, other countries, such as the U.S., shoulder considerable debt as well. But by comparison, the debt-to-GDP ratio is 100% for the U.S.

The policy-making mandarins in China’s centralized mercantile economy racked up this debt during previous downturns, by trying to stimulate the economy through infrastructure projects, many of them poorly conceived and wasteful. State banks are now plagued by nonperforming loans. Hence S&P Global’s warning yesterday.

Corporate debt has gotten out of hand as well. During the era of ultra-low interest rates that followed the Great Recession, corporations loaded up on debt. But instead of using that money to invest in organic growth, most of these borrowers launched share buyback programs or funded mergers.

This myopic decision-making was repeated in the wake of the 2017 tax cuts, when corporations used their windfalls mostly to buy back stock and not for internal investments or to pare down debt.

Because of the Federal Reserve’s quantitative easing since the 2008-2009 financial crisis, government bonds have sported low yields, prompting investors to seek higher yields via ever-riskier bonds. Companies have exploited this demand.

The confluence of these trends has resulted in a preponderance of BBB rated debt. There’s currently $3 trillion in outstanding U.S. debt rated triple-B, up from $1.3 trillion five years ago and $686 billion a decade ago. That’s the most ever for companies rated triple-B.

Triple-B debt securities are the last rung on the ladder; they’re the lowest-quality debt that qualifies for investment-grade status. A downgrade to double-B pushes a company’s bonds into the high-yield junk territory.

My guess is that Milken will be greeted with open arms. The financial community always seems willing to repeat the mistakes of the past. During the insider trading shenanigans of Ivan Boesky and Michael Milken in the mid-1980s, I was an editor working on a financial magazine in Manhattan. I experienced first hand the pain of the 1987 crash, which pushed my employer into bankruptcy. I’ll probably live to see another crash.

Low-grade corporate debt is a bomb waiting to explode. The coronavirus could be the match that lights the fuse. Run, don’t walk, to safe havens.