As coronavirus fears pummel the broader stock market, where can you turn for investments that are immune? Consider marijuana stocks.

Marijuana is a plant. It can serve as a medical treatment or a recreational drug. But you probably haven’t pondered another important function of this miracle weed: the right pot stocks can make a darn good portfolio hedge.

Cannabis is a sector with little exposure to China or other geopolitical risks such as the trade war. Domestic political trends could conceivably pose a threat, but on that score, marijuana enjoys favorable prospects.

As you’d expect, the marijuana industry already has its own benchmark exchange-traded fund (ETF): the Horizons Marijuana Life Sciences Index ETF (HMMJ). The fund swooned in late 2019, as the frothy cannabis equity market embarked on a much-needed correction. With pot stock valuations currently at more reasonable levels, the benchmark should resume its upward trajectory this year.

In recent years, we’ve witnessed a proliferation of new ETFs that are pegged to almost every conceivable theme and industry. Indeed, the ETF industry ended 2019 on a prosperous note, with assets under management rising to more than $4 trillion.

We’re likely to see the ETF industry continue its expansion this year. Among the industries positioned to serve as pegs for new ETFs is marijuana.

Whether it’s to make banking easier for “ganja-preneurs,” or to legalize pot on the national level, the legal and regulatory tailwinds in the U.S. are accelerating for the marijuana sector. These positive factors will in turn create more investment opportunities (e.g., new ETFs) in legalized weed.

Let’s look at the latest legislative and regulatory developments in the U.S. pertaining to canna-business.

The Federal Reserve Bank of Kansas City tweeted: “Year-over-year #marijuana sales growth of about 16 percent YTD in 2019 is much lower than the growth rates experienced in the first few years of legalized sales, and indicates growth in sales is moving toward a more sustainable, yet still robust, path.”

The Federal Reserve Bank of St. Louis issued a reminder that hemp businesses can get bank accounts in light of the crop’s federal legalization and previewed that “banks should be looking out for additional guidance” on federal hemp rules from financial regulators soon.

A House bill to allow the Food and Drug Administration to deem cannabidiol (CBD) a dietary supplement got two new cosponsors for a total of eight.

Illinois Democratic congressional candidate Anthony Clark hosted what his campaign dubbed the “first-ever congressional weed party.” Marijuana “has literally saved my life,” Clark told the crowd, a fat rolled joint in one hand and a shot glass in the other. “I’m a veteran with PTSD.”

Read This Story: Dispatches From The Weed Wars

The NFL Players Association disseminated a proposed collective bargaining agreement approved by team owners that includes an end to game suspensions for marijuana, a testing window of only two weeks instead of the current four months, and a higher THC threshold for positive tests.

Texas Democratic Senate candidate Sema Hernandez tweeted: “Nothing wrong with decriminalizing and legalizing all drugs. Big Pharma wouldn’t know what to do. End The War On Drugs! Repeal The 1994 Crime Act!”

A Connecticut lawmaker leading efforts for marijuana legalization in the state said “the votes still aren’t there” in the legislature.

Kentucky Gov. Andy Beshear (D) said he will “certainly do what I can” to help forge Senate support for a House-passed medical cannabis bill.

Massachusetts’s attorney general and marijuana regulators are recommending that lawmakers “provide additional civil enforcement tools and resources to address the illicit market” but “do not advise establishing any additional criminal penalties at this time.”

At the conclusion of a legislative session in which lawmakers failed to legalize marijuana, New Mexico Gov. Michelle Lujan Grisham (D) said she is willing to refer a marijuana question to the ballot as a constitutional amendment, allowing voters to decide the issue.

A recent study conducted by the marijuana dispensary chain Ultra Health projects that marijuana legalization would be a huge economic boon for New Mexico (see infographic). 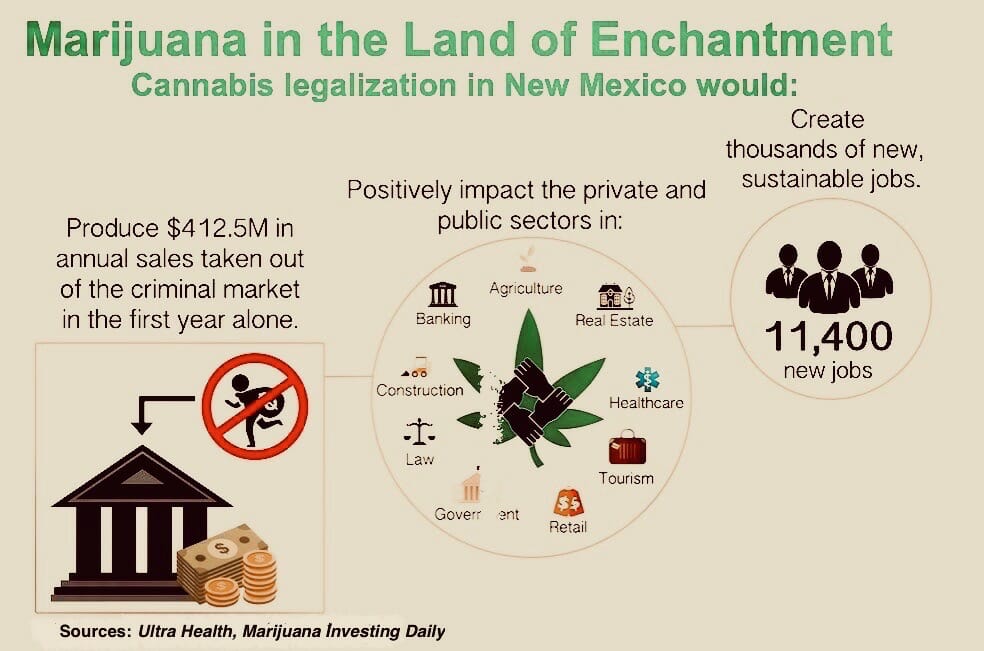 New York Gov. Andrew Cuomo (D) said he will visit states that have already legalized marijuana to learn about their programs. “I now want to literally go to California, Illinois, Massachusetts [and] sit with them. What was your plan? How did it work out? What did you learn? What can we incorporate?”

Cuomo said he will not sample any marijuana on his tour of legal states, but will bring a “taster” with him.

The New Hampshire House of Representatives approved a bill to legalize marijuana possession and home cultivation.

The marijuana market is growing exponentially but compared to its long-term potential, canna-business remains in its infancy, akin to the computer industry in the 1980s.

Imagine having been able to invest in Apple (NSDQ: AAPL) during its formative years in the go-go Eighties, when visionary founder and Chief Executive Steven Jobs was just a bearded kid in a garage, rolling up his sleeves and getting started. You’d be very rich.

These days, investors are looking for “the next Apple” of marijuana. For our report on cannabis plays that are poised to confer great wealth, click here now.