Fear Factor: How to Ride Out the Coronavirus Panic

As I survey the coronavirus carnage on Wall Street, my thoughts turn to 1987, when I worked as a financial editor in Manhattan. It was the Reagan Era. Animal spirits reigned. Stocks kept soaring to new highs.

Then out of the blue…wham.

That fateful day didn’t earn the nickname “Black Monday” for nothing. The crash pushed my employer into bankruptcy. I joined the ranks of the unemployed. My investments took a hit. But I got a new job, stocks came roaring back, and my portfolio rebounded.

I survived additional financial disasters, in 2000 and 2008. My point is this: Crashes come and go but over the long haul, the stock market always recovers.

Stocks have taken a beating in recent days. But keep your emotions in check and stick to your long-term goals. Let’s look at the still-unfolding panic and a few rational moves you can make now.

Stocks underwent their largest weekly decline in a decade last week, on worsening fears that the coronavirus outbreak will expand into a global pandemic that undermines global growth.

News that the virus was rapidly spreading from China to other countries, combined with the fumbling response of world leaders, triggered the first correction in the S&P 500 since 2018. Bonds rallied and commodities such as crude oil tanked. The table tells the horror story. 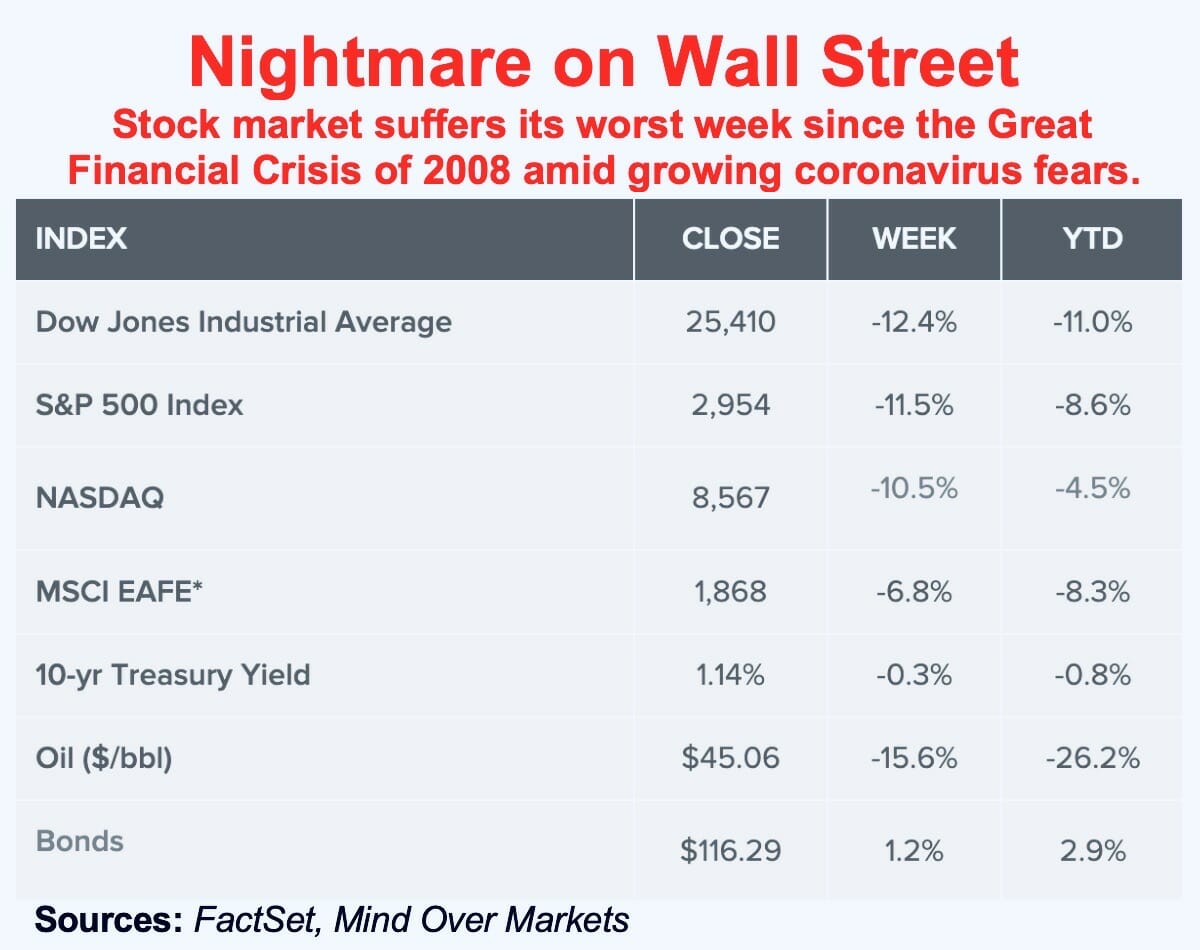 The yield on the 10-year Treasury note last week fell to the lowest level on record at 1.12%, reflecting Wall Street’s expectations that global growth would shrink and the Federal Reserve would lower interest rates.

From the S&P 500’s record reached on February 19, global equity markets have lost $7 trillion in value. The U.S. stock market alone has lost $4.3 trillion. Among the worst performing sectors have been travel and energy stocks. U.S. benchmark West Texas Intermediate crude currently hovers below $46 per barrel.

Supply chain disruptions are clobbering a wide range of industries. The stocks of airlines, hotel chains and cruise ship operators have been taking it on the chin, as officials impose travel restrictions and consumers cancel trips.

The lynchpin of the decade-long economic expansion in the U.S. has been consumer spending, which accounts for two-thirds of the country’s gross domestic product. In the coming days, new economic data scheduled for release will help investors gauge the strength of consumer sentiment.

The crux is employment. As long as jobs are plentiful, consumers are more likely to keep spending. Fear of the coronavirus already is prompting people to stay home and tighten their purse strings. We’ll see if the consumer pullback evolves into a longer phenomenon.

Fed Chair Jerome Powell indicated last week that the U.S. central bank would do whatever was necessary to maintain the economic expansion. The markets expect the Fed to cut rates later this month.

But I see several problems with further monetary easing. For starters, interest rates already are low.

The Fed has dwindling ammunition to counteract a severe economic shock. What’s more, monetary policy is an irrelevant tool to deal with production shutdowns resulting from pandemic fears.

The 2008 recession was caused by insufficient demand. A coronavirus-caused recession would be the result of supply disruptions, which lower interest rates can’t solve. Lower rates can’t magically put products on the shelves.

It’s also worth noting that the current economic expansion has been shored up by federal deficit spending and a decade of low rates. If all of that effort was required for continued economic growth, what’s left in the policy-making toolbox if we face an economic crisis? The answer is, not much.

I’m hearing a growing chorus of voices in the financial media that are calling for the Fed to follow the path of European central bankers, by embracing interest rates of zero or less. The idea makes little sense.

The U.S. economy is stronger than Europe’s and, despite signs of slowing, still exhibits several strengths. Notably, U.S. unemployment sits at a 50-year low and wages are rising.

We’ve already had more than a decade of easy money. The party can’t go on forever. Cutting rates to zero or below would limit the Fed’s options when the recession finally hits. Wall Street knows all of this. If the Fed cuts rates in March (which appears likely), investors will probably respond with a collective shrug.

The government agency investors should look to for help is not the Federal Reserve, but the Centers for Disease Control and Prevention. Containing the virus through effective public health initiatives will rescue the economy and markets. Tinkering with monetary policy will not.

Another suggested remedy making the rounds among the chattering class: tax cuts. The notion that cutting taxes would somehow offset financial damage from the coronavirus is (of course) absurd. Ignore the blather you’re hearing on CNBC. Any plan to use tax cuts to fight the coronavirus is a political non-starter.

Keep calm and carry on…

As an individual investor, what should you do now? As the Brits used to say during the darkest days of World War II: Keep calm and carry on.

Maintain a diversified portfolio, with bonds as ballast. Rotate into stable companies that provide services that are consistently used regardless of market or economic conditions.

Consumer staples and utility stocks are prime examples of “essential services” investment plays. Use stop-losses for any additional stock purchases.

Don’t panic with the rest of the herd. Selling during a downturn is a rookie mistake. Inherently strong stocks invariably bounce back. This bull market has consistently made chumps out of the bears. The bull may have further to run in 2020.

Keep your perspective. Out of the rubble of the Great Financial Crisis began the longest bull run on record. The current bull market began on March 9, 2009, when the S&P 500 closed at 676, the bear market low. The bull is approaching its 11th anniversary.

Or consider more recent history. After coming within a whisker of a correction in December 2018, the stock market soared to one of its best years in decades. The S&P 500 returned 31.5% in 2019, including dividends.

Despite last week’s sell-off, stocks are still up 6% over a 12-month period. We’re in a perilous period but this too shall pass. Get cautious but stay invested.