The Graying Go For The Green

During my teen years in the 1970s, prominent users of marijuana were long-haired kids at rock concerts. These days, it’s gray-haired seniors in rocking chairs.

New statistics reveal that seniors are by far the fastest-growing pot demographic in the United States. Grandma and grandpa are flocking to marijuana, both for medicinal and recreational purposes.

Whether Led Zeppelin posters start popping up in nursing homes remains to be seen. But one thing is certain: cannabis companies that target seniors are enjoying powerful demographic tailwinds. The greatest growth opportunities in marijuana lie with the elderly.

Cannabis use by senior citizens is up by a whopping 75% from just three years ago, according to a study published last week in the journal JAMA Internal Medicine. The spike in use by older Americans continues a trend that has been unfolding for more than a decade. The study defines seniors as those age 65 and older.

The trend is especially important for marijuana companies with substantial exposure to Florida.

The Sunshine State, with its growing population of retired baby boomers and easy-going subtropical culture, is a thriving mecca for marijuana companies. Cannabis sales are growing quickly throughout the U.S., but pot demand is especially strong in Florida.

Forget the usual pain remedies. Retirees are clamoring for Mary Jane. The highest number of medical marijuana patients in the country live in Florida, currently numbering more than 300,000.

Marijuana in Florida remains illegal for recreational use. Medical use was legalized in 2016 via a constitutional amendment. Appearing on the ballot as Amendment 2, the initiative was approved with 71% of the vote.

Florida alone is expected to generate $1.09 billion every year in medical marijuana sales. That said, voters in Florida will not get the chance this fall to decide on legal recreational marijuana. A petition drive this year to put the matter on the ballot fell short of getting the necessary signatures in time. Activists now aim for the year 2022.

Analysts estimate that an additional 15 states should have legalized medical and/or recreational pot by 2020. Actions on the federal and state levels have the power to dramatically move pot stocks up or down.

As laws legalizing marijuana proliferate throughout the U.S., the perception of marijuana as risky is diminishing, especially among the older adult population who came of age during the rebellious 1960s and 1970s. As they retire, many of these senior citizens will either continue, restart, or initiate marijuana use.

To conduct the JAMA study, researchers used data collected by the National Survey on Drug Use and Health.

Researchers analyzed answers from 14,000 senior citizens to conduct the study, finding large increases in cannabis use among several demographic subgroups of older Americans including women, people of color, those who reported receiving mental health treatment, individuals with diabetes, and those with higher family incomes.

The increase in cannabis use by seniors is linked to changing policies and social attitudes. The legalization of medical and recreational cannabis has spawned “destigmatization” (see chart, compiled with data as of September 2019). 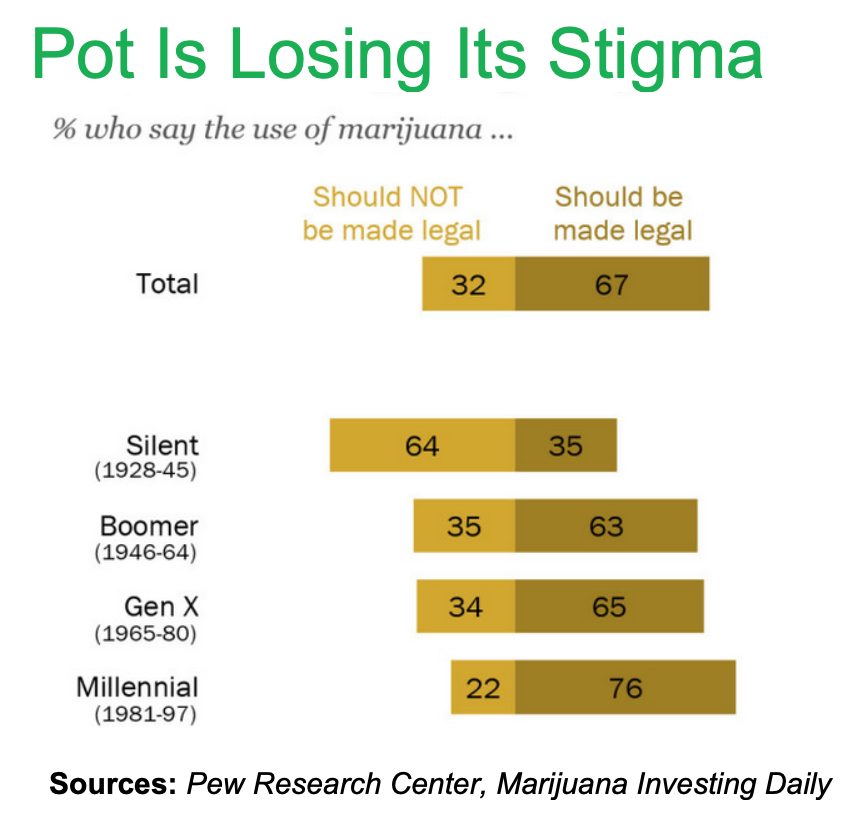 What’s more, medical evidence increasingly shows the efficacy of cannabis-based treatments for chronic illnesses. Doctors around the country are reporting an increase in marijuana use by seniors in their geriatric practices.

Patients with spasticity related to multiple sclerosis or nausea associated with chemotherapy have been shown to benefit from medical use of specific cannabinoids. Substantial evidence demonstrates that cannabis helps to reduce pain. The most consistent benefit of cannabis is witnessed in nerve pain among the elderly.

Weeding out the best stocks…

When looking for suitable marijuana investments, our team’s strategy is to find companies that apply a unique value-add, whether in the recreational or medicinal sector. Another consideration is whether it’s effectively targeting a desirable sub-group of consumers, such as the elderly.

We look for pot companies with patents, proprietary technology or special managerial know-how. We also prefer companies with solid balance sheets, branded products and extensive supply chains. These are the marijuana investments that will survive and thrive, whereas it’s no great feat to simply grow a plant or squeeze oil out of a leaf.

Some cannabis stocks are stellar investments. Many others are not. You need to conduct due diligence. The good news is, we’ve done the homework for you. Our stock-picking experts have unearthed hidden gems in canna-business that most investors don’t even know about.

To learn the details of the best marijuana plays now, click here for a free report.