CBD: Coming to a Retail Shelf Near You

Here’s what finally convinced me that cannabidiol (CBD) is becoming a mainstream consumer product: At a recent family gathering, my 88-year-old mother asked me if she should try CBD for her arthritis.

Believe me, my sainted mom is not an early adopter of anything. I interpreted my mother’s keen interest in CBD as a leading indicator of the product’s promising future. (In response to her inquiry, I punted and told her to consult her geriatrician.)

I’ll get to the investment opportunities in CBD in a minute. But first, let’s look at the wider topic of marijuana legalization.

If you still need evidence that it’s only a matter of time before the federal ban on cannabis gets lifted in America, look no further than Joe Biden’s conspicuous flip-flop on pot.

Former vice president Joe Biden, at a town hall meeting on November 16, called marijuana a “gateway drug” and was the lone Democratic contender in the 2020 presidential race to oppose federal marijuana legalization. Biden was widely criticized by fellow Democrats for his anti-pot stance.

Fast forward to this week. Biden pulled off a miracle in the Super Tuesday primaries, winning the lion’s share of delegates and putting his once-sputtering campaign into the lead for the nomination. Front-runner Biden is now walking back his “gateway” remark and has come out in favor of legalizing marijuana at the federal level.

Joe Biden has finally figured out what most of us already know: legalizing marijuana is a winning political issue…which in turn makes marijuana a winning investment.

Most Democrats and a growing number of Republicans favor legalization. Biden’s chief rival for the nomination, Sen. Bernie Sanders (I-VT), is reiterating his pledge to “legalize marijuana in every state in this country,” expunge past records, and assist people hurt by the drug war to participate in the legal industry.

Gallup polls show national support for legalization has soared from 44% to 66% during the last decade. How big a cultural shift does that represent? When Gallup first asked Americans the question in 1969 (when a guy named Richard Nixon was president), only 12% at that time said it should be made legal.

In stores and medicine cabinets…

If you’re looking to target a promising sub-sector of the cannabis industry, consider companies involved with producing and marketing CBD. The compound is becoming a familiar household item and political trends are paving the way for its widespread acceptance.

At a U.S. House hearing on Wednesday, National Institute on Drug Abuse Director Nora Volkow discussed marijuana’s benefits and said the federal government is funding research to investigate whether CBD can “help treat different types of addiction, including opioid addiction.”

CBD accounts for up to 40% of the cannabis plant’s extract. Unlike its cousin THC, CBD doesn’t give users a buzz. Sales of CBD are fueled by claims (admittedly, some of them exaggerated) that it can reap a bevy of benefits, such as reducing pain, calming anxiety, and enhancing mental focus.

CBD also happens to be one of the biggest investment opportunities you can find. Investment research group Kryptoszene released data on March 4 showing that U.S. sales of CBD products are on track to reach $23.7 billion in 2023, a 374% increase from 2019 (see chart). 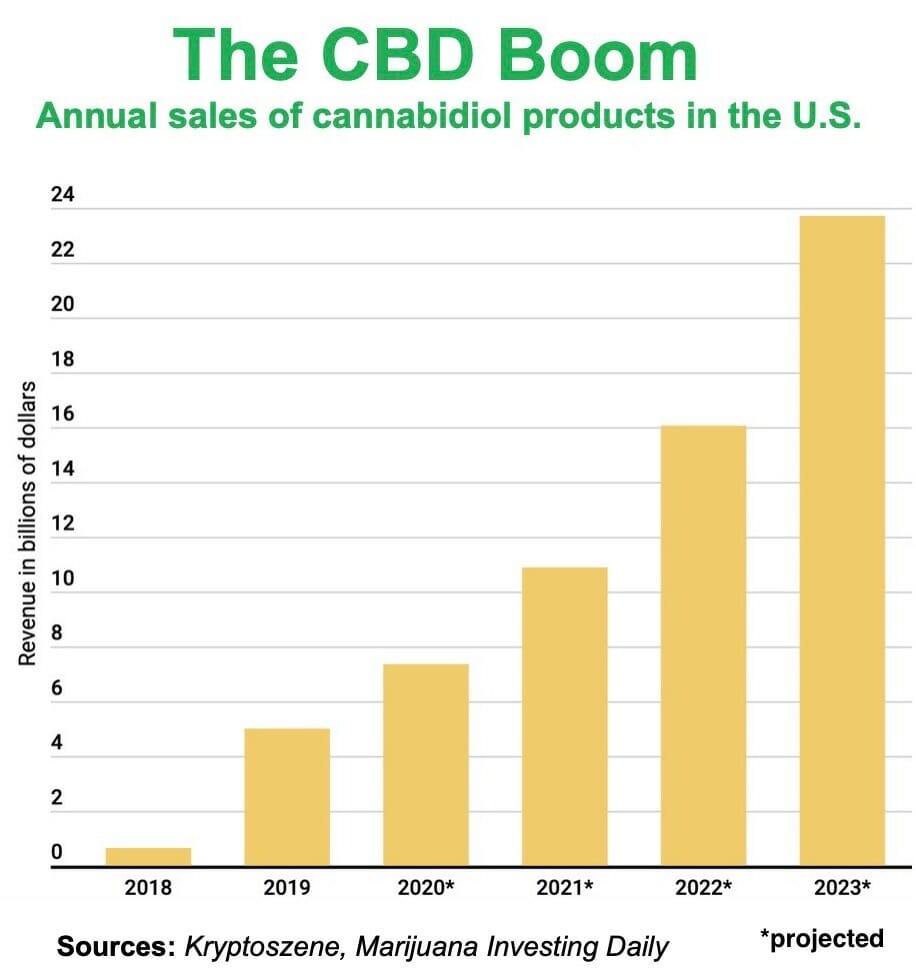 CBD is migrating into a variety of consumer product categories including food and beverages, pharmaceuticals, health, wellness, and beauty aids. Consumer and health services giants are jumping aboard the CBD bandwagon, to either develop their own products or purchase smaller CBD companies.

As the natural foods community embraces CBD, the marketing of its benefits has spawned dubious assertions. Regulators vow to crack down on the hucksters and this scrutiny should benefit legitimate CBD companies and products.

The U.S. Food and Drug Administration (FDA) recently issued warning letters to 15 companies for violating federal law by selling CBD products under claims that they can prevent or cure serious diseases, such as cancer.

That said, the FDA continues to explore potential pathways for various types of CBD products to be lawfully marketed.

The FDA recently published an overview of the research and approval process for cannabis and cannabinoids. This is a significant step that should pave a clearer regulatory path for CBD.

Cannabis has been used for medicinal purposes for thousands of years. Cannabinoids activate specific receptors in our bodies that produce pharmacological effects in the nervous and immune system.

CBD has been studied in laboratories and clinics for relief of pain, nausea and vomiting, anxiety, and loss of appetite. Empirical evidence confirms the genuine health benefits of CBD.

Companies involved in CBD are outstanding investment opportunities. To discover cannabis plays with the greatest potential for profit, click here for our free report.