Wall Street’s Thrill Ride: Will it End in Disaster?

I’m not a fan of roller coasters. To me, they seem like pointless masochism. But the kids in my family love them, so whenever we visit an amusement park, I ride along in the roller coaster to be a good sport. I hate every minute.

If you’re an average investor, you’re likewise hating every minute of Wall Street’s roller coaster. Over the past several days, we’ve seen the stock market plunge and soar and then plunge again, like a carnival thrill ride. Except, if you’re invested in stocks, the up-and-down action is no fun at all.

We have the coronavirus to thank. The flu-like disease, which began in China, has spread to several countries and about two dozen U.S. states. The number of victims now totals about 108,000 worldwide. Despite the positive spin of government officials, the virus (COVID-19) is far from “contained.” The deadly epidemic is causing economic damage that’s also clobbering financial markets.

A sudden and large rise in volatility, following extreme bullishness, often precedes a meltdown. The CBOE Volatility Index (VIX), known as the “fear index,” topped the 50 level last Friday for the first time in more than two years. The VIX also shot massively higher in 2008, on the cusp of the great financial crisis.

Another major prerequisite for a stock market crash are breaks in market structure. These occur when key support levels (“floors”) in the market are broken by sharp declines. We’re now seeing this dynamic, which also occurred in 2008.

The recent severity of market moves is unprecedented. For example, the Dow Jones Industrial Average posted its biggest single-day point decline (1,919) on Feb. 27 and its biggest gain (1,294) last Monday.

As the song goes, you can’t trust that day.

As of this writing on Monday morning, the Dow is poised to fall by about 1,300 points at the opening bell. Futures on the S&P 500 were halted Sunday night as “circuit breakers” kicked in.

Are we experiencing another 2008? It’s impossible to say. Perhaps we’ll see a significant correction in stocks on the magnitude of 15% or 20%, rather than a drop of about 40% as occurred in 2008.

Some advisors are now saying the market slump is an opportunity for aggressive bargain hunting. I beg to differ.

When 1,000-point moves in the Dow become commonplace, you need to elevate your cash levels and increase exposure to safe havens. If you try to catch a falling knife, you could get badly cut.

Last week, we witnessed one of the most volatile weeks on Wall Street since the financial crisis more than a decade ago. Exacerbating recent volatility is the widespread prevalence of algorithmic trading, which acts as an accelerant for market ups and downs.

Read This Story: Rise of The Machines: Beware of “Robo-Trading”

The Federal Reserve stepped in last Tuesday with an emergency 0.5% rate cut, which only backfired because investors saw the surprise move as a sign of panic on the part of the Fed. Despite the monetary easing, stocks plunged.

Wall Street is starting to worry that the Fed’s recession-fighting toolbox is now nearly empty. On Friday, for the first time the interest rates on the 10-year Treasury note shrunk to less than 1%, as investors flocked to bonds.

However, these positive factors only partially offset the relentlessly bad news on the coronavirus. Stocks managed to finish last week in the green…barely (see chart). 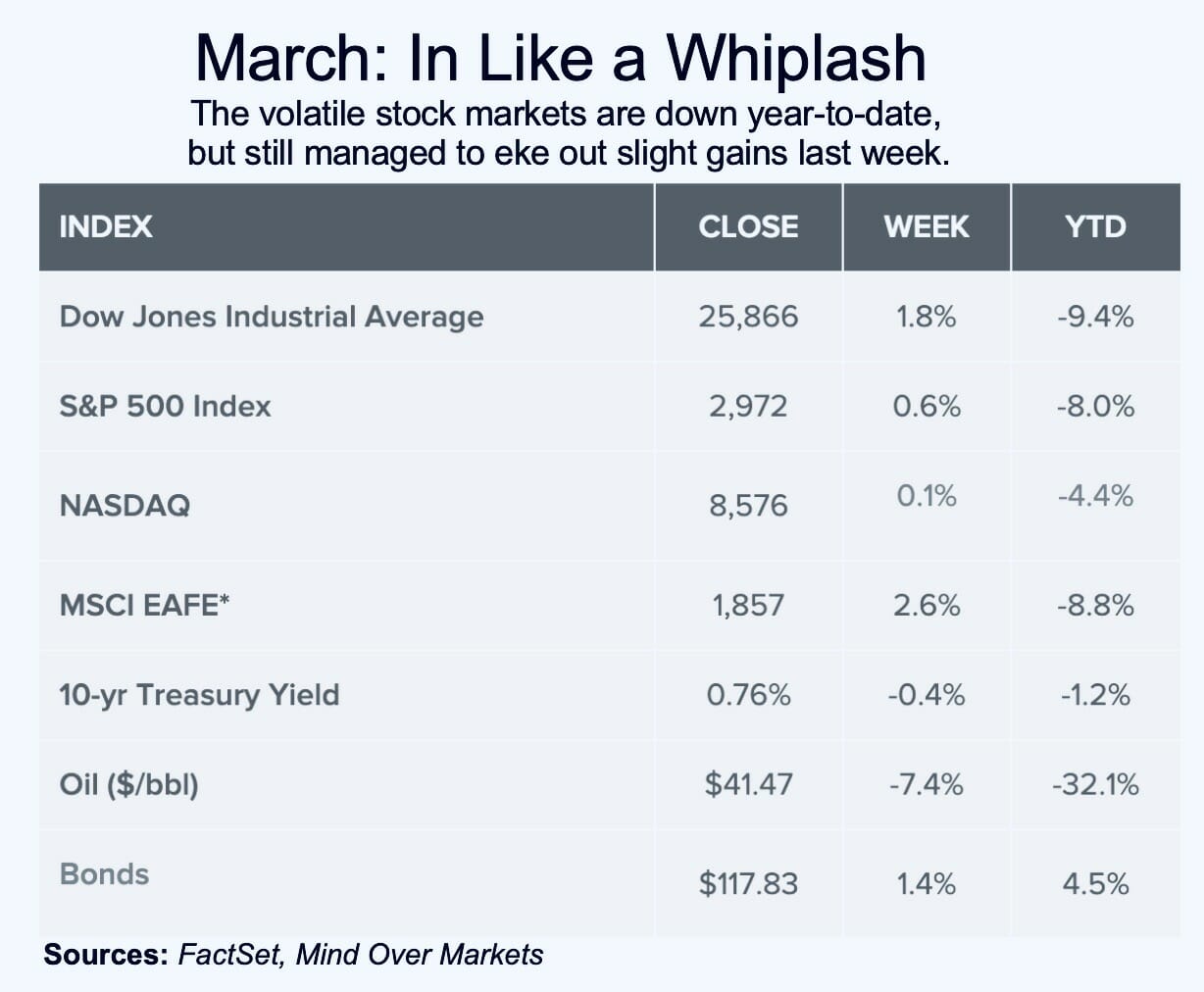 The technical picture continues to look bearish, with the Dow, S&P 500 and NASDAQ all currently below their 50-day averages. Short interest continues to climb. European and Asian stocks are in a slump as well.

Which brings us to the catastrophe in crude. The oil market is in bear territory, as oil prices plummet due to weakening demand. Global economies already were slowing, but the coronavirus epidemic has undercut economic activity and sent energy markets into free fall.

Read This Story: Oilmegeddon: The Shockwaves of Crude’s Crisis

The crisis in the energy patch worsened Friday, when Saudi Arabia’s non-OPEC partner Russia refused to go along with the oil cartel’s proposed production cuts to shore up prices. In fact, Russia’s oil minister hinted at increasing production. The OPEC meeting broke up last Friday without a deal.

We’re witnessing a watershed event: the disintegration of OPEC. Consequently, we face the possibility of oil dropping as low as the $20s, as we saw during the last oil price war.

In his overarching goal to restore Russia to global glory, Russian President Vladimir Putin relishes playing the role of disruptor. Part of his strategy right now is to start an oil price war that drives already beleaguered American shale producers out of business. That should worry you, because we’ve seen this movie before and it did not have a happy ending.

The Saudis launched an oil price war in 2014. By throwing open the spigots, they drove down the price of oil. Their aim was to bankrupt U.S. shale producers. To the keffiyeh-wearing sheikhs of this desert kingdom, it must have seemed like a good idea at the time. But the Saudi plan backfired…horribly.

Saudi oil revenue plunged to the point where the House of Saud briefly faced an existential threat. The fracking technology devised by U.S. engineers was so ingenious, domestic American producers were able to pump oil at extremely low cost, much lower than OPEC’s cost of production. Because of fracking, the U.S. surpassed Saudi Arabia to become the world’s largest crude oil producer.

The Saudis waved the white flag in their price war and curtailed production again. But the damage was done. The net effect of the previous price war has been a persistent glut of excess crude, which weighs on prices, which in turn hurts the top and bottom lines of overly ambitious energy companies that took on a lot of debt to recklessly expand.

Ever since the previous Saudi-instigated price war, equilibrium in oil markets has been elusive. Now, it appears that Russia wants to start another price war, just as the coronavirus is hurting global energy demand. Over the weekend, in retaliation for Russia not playing ball, Saudi Arabia slashed its export oil prices by nearly 10%. We’ve already seen ruinous tit-for-tat tariffs in the trade war. Now we’re witnessing tit-for-tat tactics in an oil war.

Sure, the oil price collapse has a silver lining. Consumers and businesses enjoy cheaper energy. You’ll soon start seeing lower prices at the gas pump. But that’s cold comfort, if your portfolio gets decimated or a recession renders you unemployed.

Make sure your portfolio is properly hedged, with investments such as gold. The yellow metal is particularly appealing now as a shelter from crisis.

Don’t panic. Stick to your long-range goals. Never dump worthwhile stocks. History tells us that stock markets invariably bounce back after a crash. But in the meantime, remain cautious and load up on safe havens. The roller coaster ride isn’t over, kids. Stay buckled up.

Looking for ways to cope with extreme volatility? Drop me a line: mailbag@investingdaily.com