How to Play the Coronavirus Bounce

Like most folks, I have been surprised by the stock market’s rapid unraveling in the wake of the coronavirus outbreak. Below, I’ll identify three stocks that I believe will rally strongly once the panic has subsided.

Just three weeks ago, the S&P 500 Index was at an all-time high. By the start of this week, it was more than 12% off that level and officially in correction territory. And that was before Monday morning’s huge sell-off that sent it down another 7% before that day even got started!

The telltale signs of capitulation are everywhere:

Make no doubt about it, there is worldwide panic in the financial markets. That’s bad news for investors with money already in the stock market. However, that could be good news for them if they have the cash and courage to trade the eventual rally.

Sooner or later, the virus will fizzle out and the stock market will start behaving more rationally. When that happens, the flow of money will reverse course as investors eschew low yielding bonds in favor of undervalued growth companies.

These three companies should be among the leaders driving the market higher.

The energy sector is under assault by Russia and OPEC. Rather than cut oil production to keep prices high, they are increasing production to punish American shale operators. They tried this strategy before in 2014 and it didn’t work. All that did was temporarily drive down oil prices and decrease Saudi Arabia’s annual gross domestic product (GDP) by 15% over the next three years.

Among all the major international oil producers, Paris-based Total S.A. (NYSE: TOT) has suffered more than most this year. After peaking near $57 on January 3, TOT fell below $37 at the start of this week for a decline of 35% in just eight weeks. 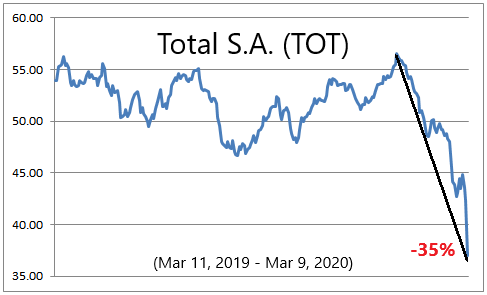 At that price, Total is valued at only 8 times forward earnings. That’s nearly half the multiple for U.S. oil “majors” ExxonMobil (NYSE: XOM) and Chevron (NYSE: CVX). That discrepancy is due to Total’s bigger reliance on oil production for its profitability. Fortunately, Total is sitting on more than $31 billion of cash and can afford to wait out the current crisis. When it abates, I expect to see TOT rapidly rise back into the mid-$40s.

The fifth-generation (5G) tech revolution is well underway. Already, most business users can access 5G connectivity in every major city in the United States. Soon, it will be available to individual users throughout most of the country.

For that reason, the obvious 5G plays such as AT&T (NYSE: T) and Verizon Communications (NYSE: VZ) have held up relatively well this year. However, some of the lesser-known 5G beneficiaries have sold off with the index including semiconductor producer Texas Instruments (NSDQ: TXN), down 30% since peaking above $135 on January 22. 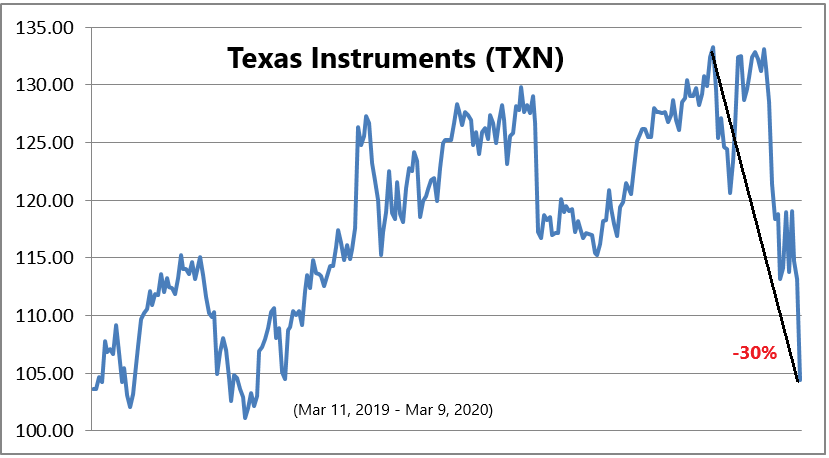 Last week, the company’s CFO acknowledged a slowdown in production this quarter related to the virus. However, that problem is expected to disappear shortly after factories in China come back online. When that happens, TXN should quickly recover above $130.

Just five weeks ago, Ford was trading above $9. It then dropped to $8 after the quarterly results were made known. This week, Ford fell below $6 while the stock market was plunging (Disclosure: I bought Ford in my personal account this week when it dipped below $6). 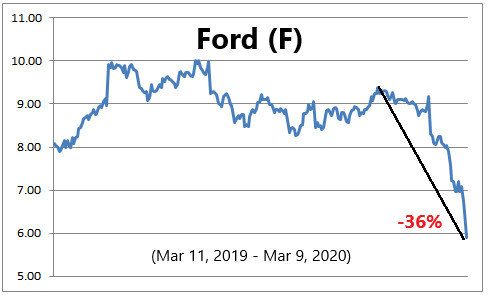 Ford has not traded that low since the early days of the recovery from the Great Recession in 2009. Over the next two years, it quickly raced above $15 as the global economy recovered faster than anticipated. I don’t expect that to happen this time, but a recovery to where it was trading last month represents a 50% gain from where it is now.

Even bigger gains can be realized by trading options on these three companies. That’s not my area of expertise, but it is for my colleague Jim Fink. In fact, last month he closed out three trades that each resulted in a 100% gain using options.

Jim Fink is the chief investment strategist of Velocity Trader. During an upcoming free event, Jim will explain how his scientific investing system pinpoints stock movements as small as 1% before they happen.

Jim already has used this system to deliver 20,747% profits to a small group of Investing Daily readers in less than five years…including a still-unfolding three-and-a-half-year win streak where they’ve raked in gains of 18,186%. Without a single loss.

To learn Jim’s secrets, secure your spot on this special event. But you’d better act now. Spots are limited and they’re going fast. Click here to sign up.