Killing time last weekend and in the mood for low-brow entertainment, I flipped on a re-run of The Beverly Hillbillies, the gloriously tacky sit-com from the 1960s that I loved watching as a kid. The plot involved (as usual) the outlandish efforts of banker Milburn Drysdale to keep the Clampetts from accessing their deposits.

It made me think of the cash crunch in the cannabis industry. The banking industry has been treating marijuana entrepreneurs as if they’re a bunch of rubes who can’t be trusted with money.

Bankers, especially those on the state and regional level, are typically conservative and they’ve been leery of the marijuana revolution. But that’s changing. The Drysdales of the world are finally willing to grant marijuana companies access to capital.

In a reversal of their previous resistance to marijuana normalization, banking associations from 49 states and Puerto Rico sent a letter on March 6 to the chairman and ranking member of the Senate Banking Committee, asking them to advance a bill protecting financial institutions that lend money to state-legal marijuana companies.

In the letter to Sens. Mike Crapo (R-ID) and Sherrod Brown (D-OH), the groups declared their strong support for House-passed legislation preventing federal regulators from penalizing banks because they lend to marijuana companies.

The banking associations urged the U.S. Senate to get moving on a conciliation markup of the Secure and Fair Enforcement (SAFE) Banking Act, which was approved along largely bipartisan lines in the House last year. 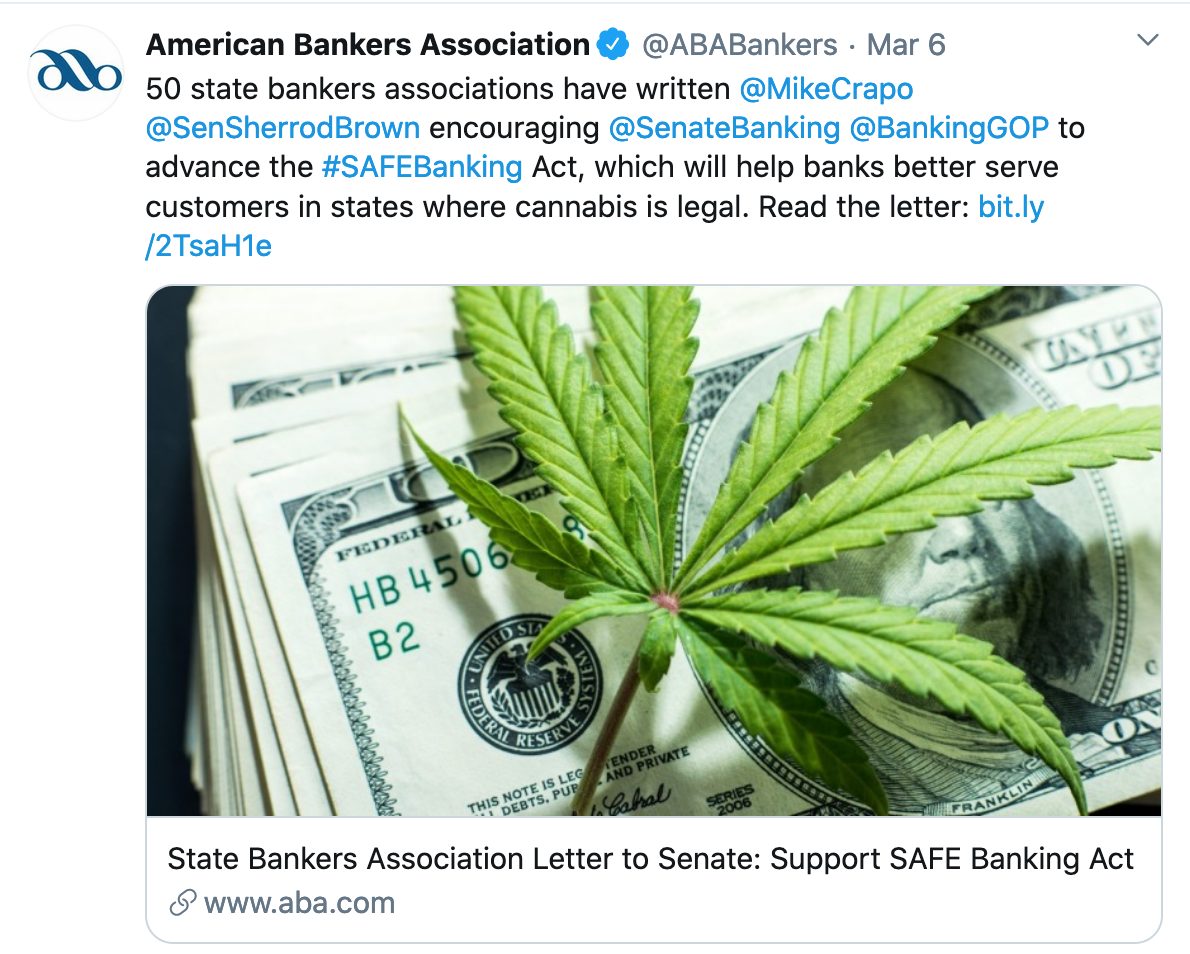 The recent, coordinated move by 50 state banking associations shows that the SAFE Banking Act is gaining traction in the Senate, where it has been stalled for months.

Chances are good that President Trump will eventually sign a reconciled version of the bill. The time to buy pot stocks is now, ahead of the bill’s enactment. When SAFE becomes law, marijuana stocks are likely to explode on the upside.

SAFE is federal legislation to expedite the marijuana industry’s access to banking services. Sen. Cory Gardner (R-CO), the bill’s leading Republican sponsor in the Senate, said Tuesday that his fellow senators are “close” to advancing the measure.

While more states have moved to legalize cannabis in one form or another, “current federal law continues to prevent banks from safely banking these businesses without fear of federal sanctions,” the associations wrote.

The letter goes on to assert:

“As a result, this segment of our local economies is forced to operate on an all-cash basis, which creates serious public safety, revenue administration, and legal compliance concerns in the communities we serve. The impact on our local economies could also prove significant, as revenue paid to unrelated industries that provide products and services to state-authorized cannabis businesses such as law firms, accountants and contractors is technically money derived from illegal activities, and thus could be considered money laundering.”

The groups, which include banking associations representing every state except Kentucky, added that the chronic confusion over existing policy conflicts “raises significant questions” about whether financial institutions can serve ancillary businesses that don’t directly deal with marijuana but may market products and services used by the industry.

“Without a change to federal law, that entire portion of economic activity in legal cannabis states may be marginalized from the banking system,” they wrote. The SAFE Banking Act “respects state sovereignty and does not facilitate cannabis sales in states that have chosen not to legalize the drug.”

“Although there are admittedly broader public policy questions at play, we ask that you evaluate and address this pressing banking problem, which is within your power to resolve,” the letter concludes. “Doing so will reap immediate public safety, tax and regulatory benefits while Congress continues to grapple with broader decisions about national drug policy.”

Senator Crapo has held up the SAFE Act, by recommending a series of restrictive changes to the bill, including limiting banking access to marijuana businesses that sell products with a maximum of two percent THC. Advocates and industry stakeholders have protested those proposed revisions.

But compromise appears to be in the works. Sen. Gardner proclaimed in February that lawmakers are “close” to reaching a deal on the legislation and that they are “working through some of the objectives Sen. Crapo has in terms of safety, research and guidance.”

Looking to make money on these marijuana trends? For our team’s latest research on the most profitable pot stocks, click here.