The Saudi-Russo Standoff: What it Means for You

The Saudi-Russian fight over crude oil production reminds me of the game of “chicken” played by juvenile delinquents in the classic movie Rebel Without a Cause (1955). In a famous scene, two cars race toward a cliff’s edge. By the rules of the game, the first driver to open the door and bail out of the car loses.

The key, though, is that both drivers are supposed to eventually jump from the doomed vehicles. You might remember that in the movie, one of the drivers tries to jump but gets stuck and crashes to his death.

Likewise, the reckless game now being played by the Saudis and Russians is driving the global economy and financial markets toward the cliff’s edge.

Over the past three years, the uneasy partnership between de facto OPEC leader Saudi Arabia and non-OPEC producer Russia has added a modicum of stability to energy markets. Whenever the Saudis needed to cut production to offset U.S. shale output, Russia went along.

Until this week, when Russia said nyet. As the following table shows, the stakes are high. 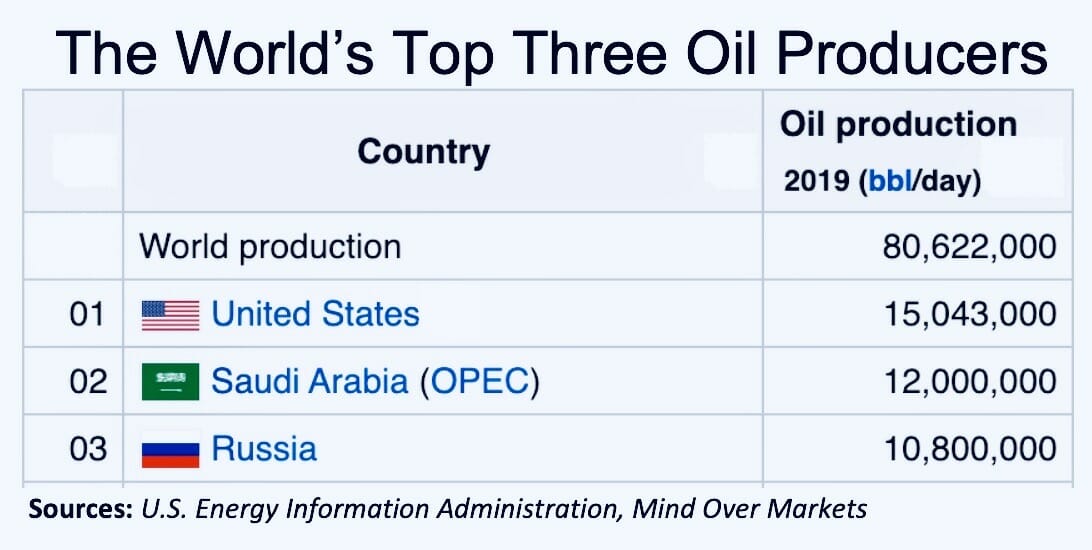 Cooperation between the world’s second and third largest oil producers has abruptly come to an end. At an emergency OPEC meeting last week in Vienna, Saudi Arabia proposed production cuts to offset falling demand caused by the coronavirus epidemic. At first, Russia hemmed and hawed but ultimately refused.

The indignant Saudis struck back, notifying buyers last weekend that they would offer deep discounts on their oil sales for April. The world already was awash in a glut of crude oil. Crown Prince of Saudi Arabia Mohammad bin Salman once again lived up to his reputation for being headstrong. “MBS,” as he’s known, wants to show Russian President Vladimir Putin who’s boss.

Now, a massive influx of crude is about to swell already bulging world inventories. The price of oil has fallen to about half its level at the start of the year. Oil prices fell about 25% on Monday alone.

Investors were shocked that Russia refused to play ball. They were even more shocked when the Saudis retaliated. The two energy powerhouses have gone from partners to outright enemies. We’re witnessing nothing less than the disintegration of OPEC.

Combined with coronavirus fears, the Saudi-Russo rift triggered a rout on Wall Street. In terms of points shed, “Black Monday” marked the worst day ever for the Dow Jones Industrial Average. In terms of percentage losses, Monday’s crash marked the 11th largest single-day drop in the Dow’s 120-year history and the second largest since the turn of the millennium (see chart). 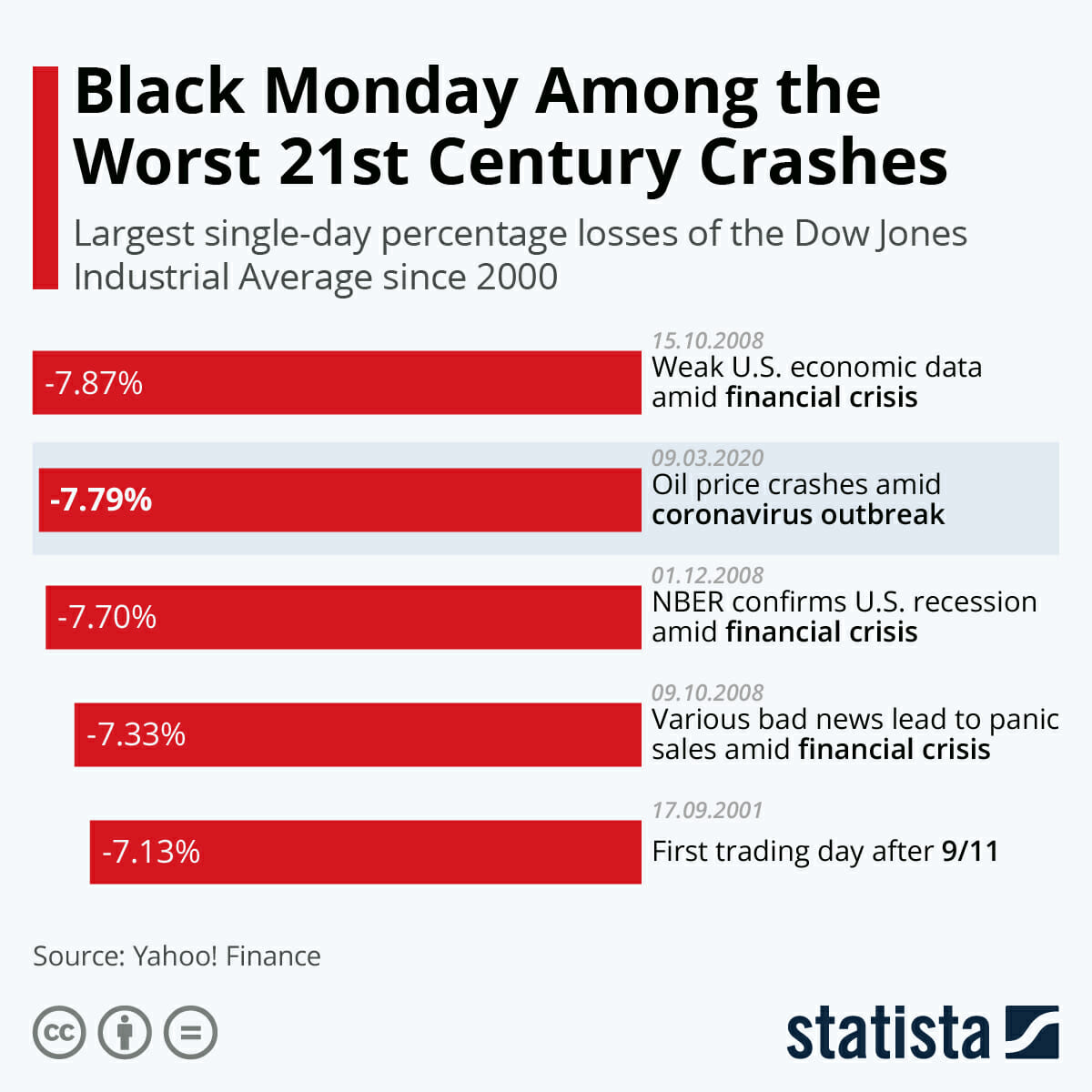 Stocks partially bounced back Tuesday on stimulus hopes, but some analysts are rightfully skeptical that the White House’s idea of a payroll tax cut can stem economic damage from a public health crisis. Nor would it address severe imbalances in oil markets that are worsened by the Saudi-Russo standoff.

Another concern is that economic stimulus would take time to pass through Congress, whereas world markets are grappling with a solvency problem for which there is no time to lose.

Accordingly, the three major U.S. stock market indices opened today deeply in negative territory. As of this writing late Wednesday morning, the Dow was down by more than 1,000 points. The roller coaster ride continues.

Read This Story: Wall Street’s Thrill Ride: Will it End in Disaster?

U.S. Treasury yields are at an all-time low and they slipped even lower on Wednesday.

Putin: hoisted by his petard?

Vladimir Putin’s goal is to cripple the U.S. shale industry, by driving prices so low it becomes impossible for indebted shale producers to make a profit (thereby gaining market share for Russia).

Putin just might succeed, but it’s a dangerous gamble that could push the global economy into recession and damage his own country’s oil-dependent economy.

The Saudis are now determined to punish the recalcitrant Russians, in the same manner that Putin wants to punish American shale producers. Apparently, oil producers learned nothing from the disastrous oil price war of 2014.

“Hoisted by his own petard” is a Shakespearean idiom, coined by the great bard in Hamlet. It means to be hurt by one’s plot intended for another, a term that derives from explosive devices hoisted over fortress walls during Medieval battles. These bombs often went awry and destroyed the assailant. Putin’s machinations come to mind, whether it’s U.S. presidential elections or global oil supply.

Putin never undertook the difficult task of diversifying the Russian economy. The country remains a petro-state (and kleptocracy) that’s dangerously reliant on the fickle gyrations of the energy patch. Even Saudi Arabia has taken steps to move away from its over-dependence on fossil fuels.

Putin finds himself in a precarious spot. Approximately half of Russia’s budget stems from taxes on oil and gas, which means the Kremlin must enact budget cuts and tax increases whenever energy dips.

All investors have a stake in this game of chicken. When oil goes bust, the overall stock market often suffers collateral damage. That’s the dynamic unfolding so far this week.

Now that oil prices have collapsed, we’ll see a wave of bankruptcies and layoffs in the energy sector, which in turn will weigh on the broader economy. Thousands of workers in several U.S. states that rely on the energy industry already are getting pink slips.

Equity benchmarks around the world have swooned in recent days, with U.S., European, and Asian stocks in correction territory. We’re not that far from a bear market in global stocks.

The Chinese and European economies already were slowing, before the coronavirus and oil price war occurred. A global recession this year looks increasingly likely. Whether it’s a soft or hard economic landing is anyone’s guess, but we’re overdue for a recession and signs point to a severe downturn.

Low-grade corporate debt has grown to massive proportions and it’s a ticking time bomb. If the economic slowdown triggers a wave of corporate defaults, we could see a chain reaction “meltdown” reminiscent of 2008.

European Central Bank (ECB) President Christine Lagarde said Tuesday that Europe faces a 2008-style crisis unless leaders act quickly. She indicated that the ECB would implement stimulus measures as soon as Thursday. Problem is, interest rates already are extremely low in the U.S. and Europe. Central bankers don’t have much ammunition left.

Make sure your portfolio is properly diversified. Defensive sectors such as utilities and real estate should weather the storm. We’ve pinpointed a bevy of high-yielding stocks with a proven history of withstanding crises. Click here for details.

Gold is a reliable safe haven during tumultuous times. Gold has enjoyed a big run-up in prices over the past year, but the rally in the yellow metal should continue. Our experts have found a gold play that could hand you exponential gains…if you act now. Read our special gold report.

For new stock purchases, use a “stop-loss” order with your broker. Using this order, the trader will pre-set the value based on the maximum loss the investor is willing to tolerate. If the price drops below this fixed value, the stop loss automatically becomes a market order. As soon as the price falls below the stop level, the position is closed at the current market price, which prevents any additional losses.

It’s not too late to take defensive measures. Don’t let your portfolio plunge off a cliff.

Questions about crisis investing? Drop me a line: mailbag@investingdaily.com.