Your Best Bet Against Stagflation

As the stock market careened up and down from one day to the next, an alarming dichotomy occurred in the financial markets last week. While the yield on the 10-year Treasury note fell below 1%, inflation as measured by the consumer price index (CPI), increased by 2.3% over the past 12 months. 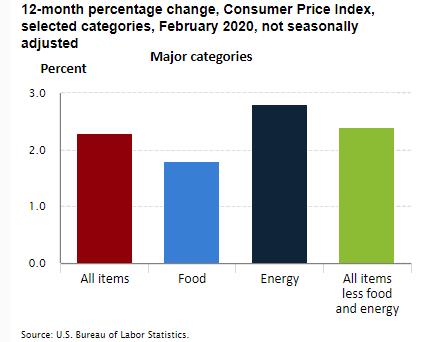 Although inflation is low in absolute terms, it has been on the rise since the CPI growth rate bottomed out at 1.6% last June. If it continues increasing at its current pace, it will surpass 3% before the end of this year.

That’s a problem. If inflation is growing at a faster rate than Treasury note yields, then the real rate of return on those notes is negative. And that’s before income tax on the interest earned on those bonds is taken into account.

A negative real rate of return on the 10-year Treasury note means one of the two things is likely to occur over the next six to 12 months: a recession will occur, driving CPI lower, or the bond market will crash.

Of course, either outcome is undesirable for the financial markets. A recession would decrease corporate profits, pushing the stock market lower. A bond market crash could be even worse, potentially triggering a wave of defaults on corporate debt (the global debt market is roughly three times the size of the global equity market).

Among the two choices, a relatively short and mild recession would be the least damaging outcome. That would allow time for bond yields to gradually rise during the ensuing recovery until they once again exceed the CPI growth rate. It would also avoid a meltdown of the global debt markets.

But if rising CPI becomes the norm over the remainder of this year, having an inflation hedge in your portfolio could prove enormously valuable. There are several ways to do that.

You could buy a gold fund such as the SPDR Gold Shares Trust (GLD), except gold does not always rise with inflation. It is really more of a hedge against geopolitical instability, which is often accompanied by turmoil in the financial markets.

Or you could try your hand at the futures market by buying contracts on all manner of hard assets and agricultural goods. I don’t recommend it. The pros that trade in the commodity pits have access to inside information that gives them an enormous edge.

For those reasons, I recommend that most self-directed investors buy shares of the Fidelity Global Commodity Stock Fund (FFGCX) as an inflation hedge. As shown in the chart below, this open-end mutual fund has its money spread across three broad categories of hard assets: energy, metals and agriculture. 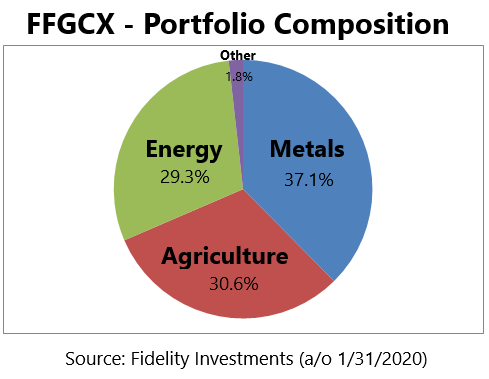 However, the fund does not own any commodities. Instead, it owns stock in companies that produce the underlying assets. For example, its largest holding is Nutrien (NYSE: NTR), a Canadian company that produces crop nutrients for farmers.

The stock market’s recent plunge has not been kind to companies of all kinds, especially commodity producers. During the past month, FFGCX has lost 21.5% of its value compared to a 14.5% drop in the SPDR S&P 500 ETF (SPY). 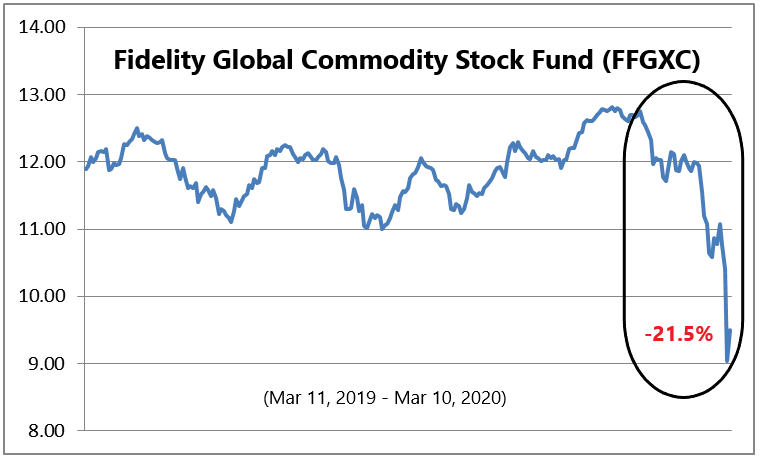 Commodity stocks have fared worse on the assumption that a protracted recession could result in deflation. That belief is reasonable assuming a decline in economic productivity would lower prices for food, energy, and metals.

But if we end up getting the dreaded s-word, i.e. stagflation, then just the opposite could occur. Stagflation is the simultaneous occurrence of declining economic growth and rising inflation.

Thankfully, stagflation doesn’t happen often. But when it does occur, as it did in the 1970s, the global financial markets can go into a prolonged tailspin.

At the moment, energy prices are falling, not rising. The price of oil has dropped in half this year as Russia and OPEC conspire to dump huge supplies of oil on the market to drive U.S. shale producers into bankruptcy. However, if that effort is successful you can bet that it won’t be long until oil prices are rocketing upward.

Meanwhile, gold prices have been heading higher. One year ago, an ounce of gold would cost you less than $1,300. Last week, it would set you back nearly $1,700. Food costs also have risen over the past 12 months. The price of wheat is up 21%, while coffee is 15% more expensive.

Let’s hope the decade of the 2020s is not a repeat of the 1970s. As someone who experienced it, I can tell you that it does not bring back a lot of happy memories for most Americans. Double-digit unemployment, gas rationing, and rampant inflation are not much fun.

But if it does happen, you need to protect your hard-earned financial assets. That’s especially true for folks close to retirement age, who don’t have enough time to wait for the eventual recovery. For them, stagflation is a worst-case scenario.

That does not mean that it would be impossible to make money in the stock market. Passive investment strategies such as buying an exchange-traded fund (ETF) on the overall stock market would fail. But active strategies that identify undervalued stocks and use leverage such as options to amplify the results could still work quite well.

That’s not my area of expertise, but it is for my colleague, Jim Fink.

Jim Fink is the chief investment strategist of Velocity Trader. Jim has devised a proprietary investing system that has delivered 20,747% in profits to Investing Daily readers in less than five years…including a three-and-a-half-year winning streak in which they’ve raked in gains of 18,186%… without a single loss.

Jim just agreed to show 500 smart investors how to earn 5,000% in only one year. Want to join his group? You’d better act now; spots are going fast. Sign up here.