When a reporter asked notorious bank robber Willie Sutton why he robbed banks, Sutton supposedly told him: “Because that’s where the money is.”

I suspect the now-famous quote is apocryphal. As a longtime journalist, I can instinctively tell when one of my brethren is playing it cute with a quote to beef up a story.

Regardless, the sentiment attributed to Sutton perfectly explains why all eyes in the marijuana industry are now focused on banks. For entrepreneurs trying to build viable marijuana businesses, the banking sector is where the money is.

Marijuana companies are in desperate need of the capital and financial services that only banks can provide. And the vaults are about to get pried open.

More than a dozen major trade associations and interest groups sent a letter on March 12 to Senate Banking Committee Chairman Mike Crapo (R-ID), asking him to advance a marijuana banking bill through his committee. The bill has been stalled in his committee for months.

Because of this pressure from well-financed groups, Senator Crapo appears to be on the verge of relenting and allowing the popular bill to reach the full Senate. Some of these groups contribute to Crapo and nothing gets a lawmaker’s attention like pressure from campaign contributors. As I’ve repeatedly advised you, put aside the political rhetoric about marijuana and…follow the money.

Called the Secure and Fair Enforcement (SAFE) Banking Act, the House-passed banking measure would ensure that financial institutions are not punished for providing banking services to state-regulated cannabis companies.

Previous to the March 12 letter, state-level banking associations had exerted a similar lobbying tactic. Now, an even wider spectrum of business groups are applying pressure.

Medical marijuana is currently legal in 33 states and the District of Columbia. Recreational use is legal in 11 states and DC. The following map provides a clue as to Crapo’s position. As you can see, Idaho has done nothing to legalize pot. 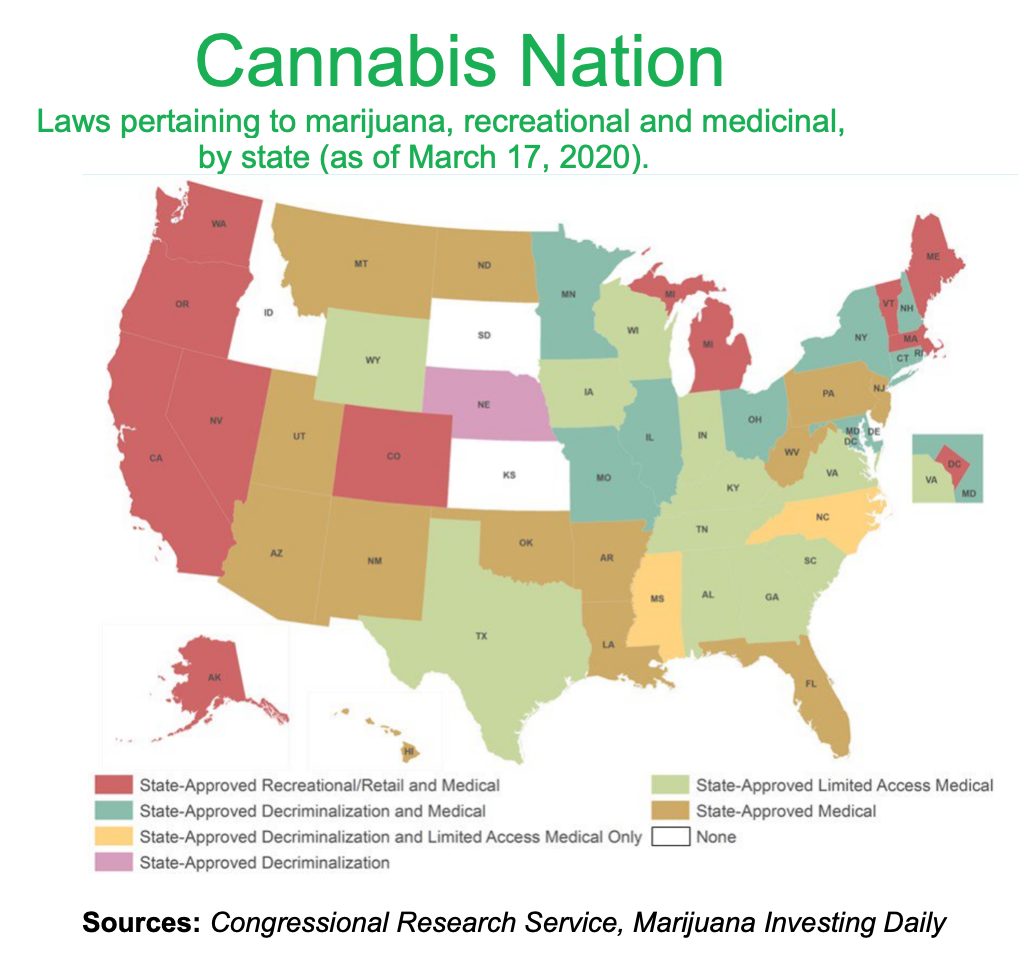 Despite the accelerating move among most states to legalize marijuana, bankers remain wary of the industry because it’s still illegal at the federal level. Out of approximately 12,000 U.S. banks and credit unions, only about 560 banks and 160 credit unions provide services to the cannabis industry. Hence the creation of the SAFE Act.

The SAFE Act passed the House with substantial support from both parties but sits dormant in Chairman Crapo’s committee. Crapo said last December that he did not support the bill, largely because the legislation doesn’t address broader public health and safety issues. For years, Crapo refused to even discuss letting banks serve the marijuana industry.

The conservative lawmaker from red state Idaho has suggested a series of revisions to the SAFE Act, including some that industry stakeholders view as unworkable. Notably, Crapo has suggested a 2% tetrahydrocannabinol (THC) potency limit on products for cannabis businesses to qualify for access to financial services.

THC is the chemical compound that gets users “high.” The culture wars of the 1960s and 1970s haven’t completely faded away and they’re still being waged on hot button issues such as THC. The “Cheech and Chong” stereotype dies hard.

Senate supporters of SAFE decry Crapo’s strict THC limit of 2% as a non-starter. THC levels vary widely, but these days, it’s normal to find marijuana with a THC content of 20% or more.

However, faced with renewed pressure from a multitude of powerful business groups, Crapo recently indicated a willingness to compromise on sticking points, such as his proposed cap on THC levels.

Senate Democrats have been on the marijuana bandwagon longer than their GOP counterparts and generally support SAFE. However, as Republicans eye difficult 2020 re-election campaigns in blue or purple states (e.g., pot-friendly Colorado), they’re coming around to embrace the bill. A bipartisan “Cannabis Caucus” is gaining traction in the Senate, with moneyed groups providing the impetus.

Asserted the March 12 letter to Crapo: “Our organizations continue to support SAFE because it is an initial legislative step that allows the legal cannabis industry into the banking system, ultimately protecting law-abiding financial institutions and ancillary services businesses from their untenable position and addressing increasing public safety concerns.”

Why does passage of the SAFE Act matter for investors? Once SAFE is enacted into law (which I think will eventually happen), thousands of marijuana companies of all types and sizes will have freer access to financial services and capital, easing the industry’s cash crunch.

Also with passage of SAFE, tons of money from Big Tobacco, Big Alcohol, Big Pharma, and other large corporations will flood the marijuana industry. Institutional investors will increasingly step up to the plate, too.

A colossal amount of money is at stake. Arcview Market Research and its research partner BDS Analytics estimate that spending on legal cannabis worldwide accelerated in 2019, soaring 38% to $16.9 billion, and should reach $31.3 billion in 2022, growing at a 26.7% compound annual growth rate over the five-year frame from 2017. The Arcview/BDS estimates call for a $57 billion worldwide market by 2027.

Sure, marijuana equities suffered a correction in 2019. But now, you can find worthwhile bargains in the sector. “Canna-billions” are waiting to be made.

That said, there are caveats to marijuana investing. You should steer clear of thinly capitalized marijuana penny stocks that lack significant products in the marketplace.

Investors have indiscriminately thrown their money at marijuana stocks with a lemming-like fervor that’s reminiscent of previous market frenzies: Dutch Tulip Mania and the dot.com bubble come to mind. Just as I predicted, marijuana stocks swooned last year. But the strongest ones survived and they’re poised to bounce back.

With so much volatility in the broader stock market these days, how can you pinpoint stable equities in the pot sector? That’s where the experts at Investing Daily can help.

We’ve put together a presentation that steers you toward the highest-quality value plays in cannabis. These pot companies are largely immune to the panicky sell-offs triggered by the coronavirus epidemic. But you need to act quickly, before the investment herd discovers these hidden gems and bids up their share prices. Click here for details.