The End Is Nigh! (Of Panic Selling, That Is)

I am old enough to have lived through several bear markets. I know how they feel, and I can sense when they are peaking and about to lose steam.

This bear market isn’t over yet, but the end may be closer than most people think. If so, that creates a once-in-a-decade opportunity for investors with the courage to act when the time comes.

In October 1987 I was a young stockbroker full of books smarts but short on real world experience. I was completely caught off guard by the “Black Monday” crash that wiped out more than 22% of the stock market’s value in a single day. Fortunately, most of my client accounts were highly diversified with a large portion in bonds so the damage was minimal.

Twelve years later, I smelled a correction in the making as Internet stocks soared to ridiculous heights in 1999. From 2000 through 2002, the S&P 500 Index fell by 40%. I never owned any of the “dot.com” businesses to begin with. So, I missed out on the big rise but I avoided most of the subsequent drop, too.

Even worse was the stock market crash of 2008-2009, when the S&P lost half its value. By then, I could sense what was coming and knew what to do. I acted early before much damage had been done. I sold most of my stocks and bought a lot of bonds and a little gold and managed to get through that period with a slight gain.

So here we are again, faced with another bear market of indeterminate length and depth. Will it end soon, or will the economic consequences of the virus linger for months or years after this bug has been squashed?

Already, there are early signs that some investors are beginning to think opportunistically. One sign that a bear market is coming to an end is when individual stocks and sectors begin to trade independently of one another.

During the capitulation phase, many investors sell everything in a panic regardless of the underlying fundamentals. But eventually, they come to realize that the impact on all businesses will not be the same.

During the past week, several retail stocks with strong e-tail capabilities have spiked. On March 12, Walmart (NYSE: WMT) fell below $103. Six days later it rose above $128 for a 24% rally in just six days.

Pharmaceutical retailer Walgreens Boots Alliance (NSDQ: WBA) did even better, up 29% over the same span. After WBA dropped 30% over the previous two months, Wall Street now realizes that people will be buying a lot of drugs online in the months to come and believes that a good chunk of that business will go through Walgreens. 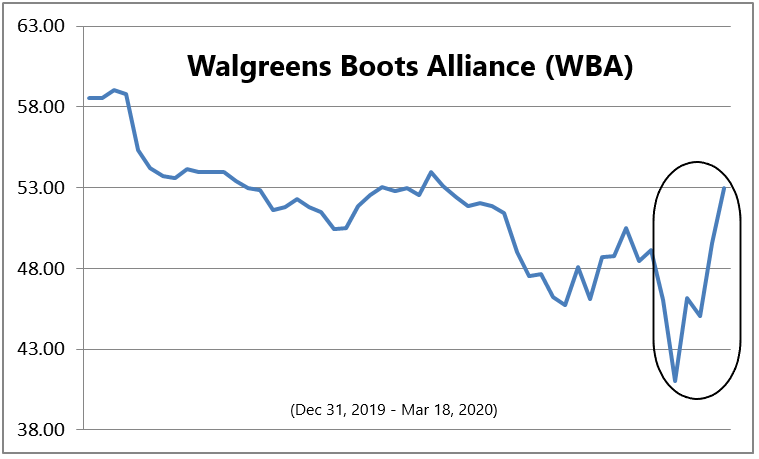 This bear market is different from the others in that its primary cause is not financial in nature. The previous bear markets were the result of financial bubbles triggered by irrational human behavior. This one is the result of a natural occurrence that arrived with little warning and no immediate remedy.

For that reason, I think the bear’s duration will be considerably shorter than the others. Before the virus hit, unemployment was low and wages were rising. Inflation was also on the rise, but still below the Fed’s target level of 3%.

Yes, stock valuations were on the high side but not exorbitantly so. Without the virus, I believe we would have had a correction of 10% – 15% instead of the 30%+ plunge that occurred over the past eight weeks.

Next month, most companies will release Q1 results and guidance for the remainder of this year. By then, we should know a lot more about the long-term ramifications of the virus. At that time, the grey skies hanging over the market may begin to part.

To be clear, many sectors of the economy will suffer aftershocks of the coronavirus outbreak long after it is gone. In particular, the travel and hospitality industries may take years to fully recover. In addition, the energy sector could go through a consolidation phase that results in many of those companies going out of existence.

But in the end, the global economy will get back on track and the stock market will recover. Gradually at first, and then more quickly as money comes out of bonds and into stocks. Some of the stock market’s best returns have been in the months immediately after a bear market has ended.

As an investor, you can’t afford to miss out on the initial phase of the next recovery period. If you wait until all of this year’s losses have been recouped to get back into the market, you will have missed a huge piece of the next leg up.

But you can profit now from this market swoon, by investing in the traditional safe haven of gold.

The yellow metal’s price has been on a tear and it has further to run. Looking for a well-positioned gold mining stock now? Click here for details.