Bond Markets and The Danger of Crowds

As I observe the behavior of the bond markets in recent days, I’m reminded of the rock shows that I regularly attended as a teenager.

I’m too old for monster rock spectacles now. But picture yourself in a crowded stadium. A huge crowd of panicky concertgoers suddenly makes a mad dash for a small exit. Now think of those kids as investors fleeing to the haven of short-term Treasuries. You get the idea.

The growing urgency for cash-like instruments has generated a massive selloff across stocks and investment-grade bonds. Bond market liquidity is the ability to buy and sell large quantities of assets without disrupting the price. This liquidity has been under assault over the past two weeks as panicky sellers abandon riskier assets for safety.

The fixed-income market has not been immune to panic selling, with the rout in stocks even extending to bonds. When markets undergo extreme levels of stress within a short period, certain segments of the bond market can move in ways similar to stocks. That’s especially true for bonds with more credit risk and less liquidity.

Over the last two weeks, stocks and bonds have declined 20% and 5%, respectively. The last time we witnessed simultaneous selling to this degree was during (you guessed it) the crash of 2008, when stock plummeted 18% and bonds slid 2%, all in a single week.

We’re in uncharted territory, folks. For the first time in history, the New York Stock Exchange today closed its trading floor and conducted all-remote trading due to the pandemic.

Funds handling corporate bonds, leveraged loans and other fixed-income securities are vulnerable to insufficient liquidity when faced with outflows. As bond fund managers try to sell corporate debt holdings to raise enough cash to handle redemption requests, it triggers a stampede to sell that further tests liquidity, prompting investors to dump their debt securities at beaten-down prices, deepening their losses.

Companies that already were struggling to meet their obligations because of a slowing economy are now taking hits to revenue and earnings because of the pandemic. Solvency will become an acute problem for certain industries, notably airlines. Hence the calls for federal bailouts and liquidity injections from central bankers.

Disaster in the energy patch…

Which brings me to the energy sector. The collapse in oil prices has made it even more difficult for debt-strapped energy companies to meet their interest payments and to generate new financing. Altogether, the energy companies in the S&P 500 stock index are down about 60% this year. Prices of bonds issued by U.S. energy companies have plummeted (including the safer types of bonds) and their yields have soared. Even blue chip “supermajors” have suffered recent reductions in their credit ratings.

As the coronavirus pandemic undercuts economic activity, demand for energy is plummeting. U.S. shale producers already were stretched thin. The outbreak is the coup de grace. Energy producers are slashing capital spending, which in turn devastates the oilfield services industry. You can expect to see a wave of bankruptcies and layoffs throughout the energy sector, which will adversely affect the financial markets and broader economy.

Stocks continued their month-long meltdown on Friday, with the Dow Jones industrial Average falling about 4.5% below where it stood when Donald Trump was sworn in as president on January 20, 2017. The S&P 500 also dropped more than 4% on Friday. The three-year Trump rally has been wiped out. Year to date, the Dow is down about 33% (see table). 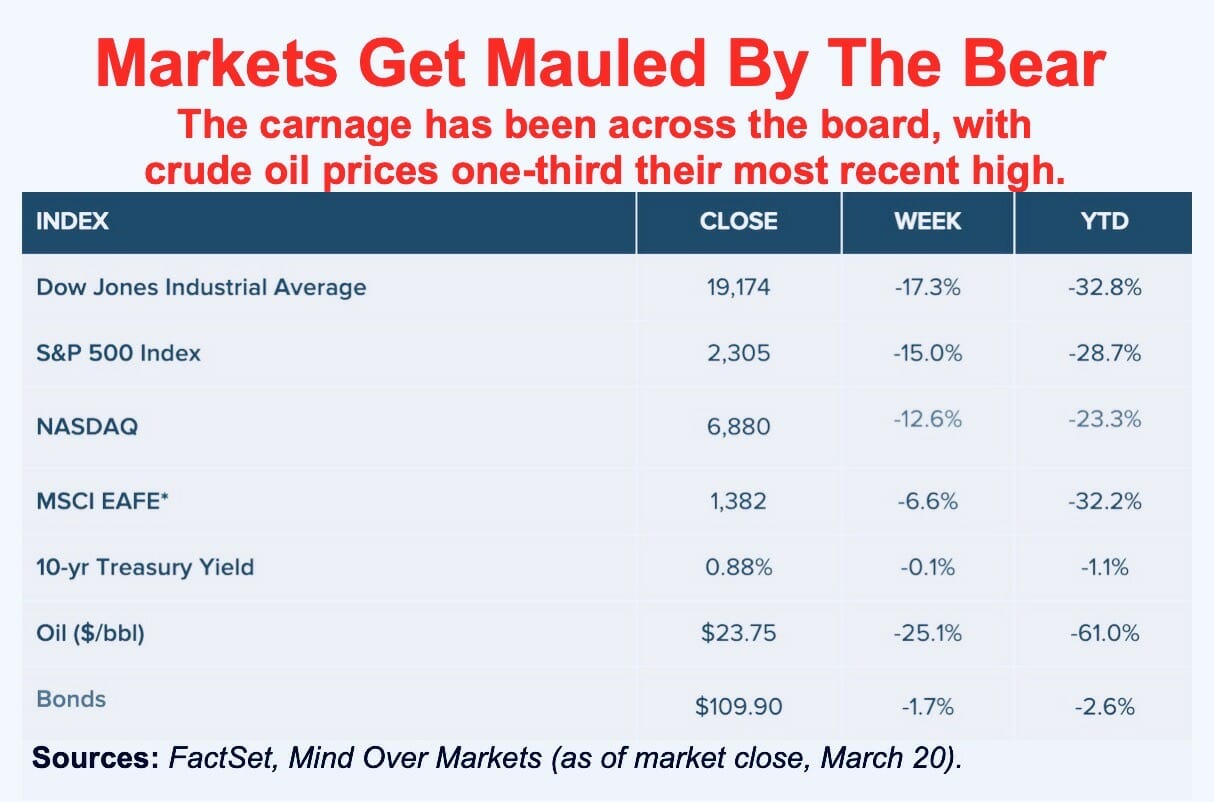 There’s no bottom in sight. Shortly before markets opened Monday, the Federal Reserve called a third emergency meeting to announce several new measures that would expand the Fed’s efforts to bring stability to shaky corporate debt markets. Among the central bank’s measures is the establishment of two facilities to support credit to large employers.

Investors were unimpressed. All three main U.S. stock market indices opened Monday deeply in the red. Before the bell in pre-market trading today, S&P 500 futures had fallen more than 4% in five minutes, triggering a limit-down trading halt. Over the weekend, the Senate failed to agree on a stimulus package to aid the virus-stricken economy. The political gridlock is spooking investors and the Fed seems powerless to calm them.

Stocks have collapsed about 35% since the coronavirus started spreading around the world last month. We’re witnessing one of the worst financial collapses in modern history, with more than $8 trillion in shareholder value evaporating. Five times over the past month, “circuit breakers” have automatically halted trading.

None of these measures are reassuring investors. They only seem to feed the sense of desperation. As the coronavirus rapidly spreads, infections and deaths are increasing exponentially and putting a strain on ill-prepared health care systems. “Social distancing” is resulting in closed businesses, lost paychecks, and declining economic activity. This damage to the economy will start to show up in official data and employment reports.

But take heed: long-term investors should never dump their stocks in a panic. Financial markets will eventually recover. During the 2008-2009 crisis, it appeared as if global capitalism might collapse. But it didn’t. Instead, we got the longest bull market in history. Over the next 11 years, from trough to peak, the S&P 500 roughly doubled.

Stocks will resume their winning ways. But over the short term, with both stock and bond markets under extreme pressure reminiscent of 2008, where can you turn? Consider gold.

Gold prices have soared but as coronavirus panic grips investors, the yellow metal has further to run. Our investment experts have pinpointed a play on the “Midas metal” that could hand you exponential gains…if you act now. Click here for details.

Questions about portfolio hedges and crisis investing? I’m here to help. Drop me a line: mailbag@investingdaily.com