Investing in a Post-COVID World

From personal experience, I’ve learned that adversity often turns out to be a blessing. During the 1987 stock market crash, for example, my employer went bankrupt and I lost my job as a financial editor. I was temporarily disheartened, but I was able to snag a far better job as a congressional staffer in Washington.

The Black Death of the 154h century hastened the end of feudalism in Europe and planted the seeds of free enterprise and social mobility. The carnage of World War I ended several repressive monarchies throughout the Continent. The next bloodletting, World War II, catapulted the United States to superpower status.

The coronavirus pandemic also will prove a catalyst for creative destruction. This I can assure you.

I don’t mean to minimize the human suffering caused by the coronavirus. Real people are at stake, not just dollars and cents. But when the coronavirus crisis fades (and it inevitably will), certain sectors will rebound more strongly than others. One sector poised to reap outsized gains in the post-COVID world is technology.

As of this writing Wednesday morning, stocks were extending their gains. Wall Street is cheering advancement of the stimulus package, which will provide massive help for businesses and workers.

It’s worth noting that the rebound in 1933 was followed by another stock market crash, during the recession of 1937. From the stock market’s peak in March 1937 to the eventual bottom a year later, stocks fell more than 50%. The severe economic downturn didn’t end in 1933. Likewise, the coronavirus pandemic is far from behind us.

Fast forward to March 2020. There’s plenty of reason for optimism, if you pick the right sectors.

Factors are currently in place, in large part fueled by the pandemic itself, that are positioning technology companies for a massive resurgence once this virus is under control. Below, I’ll pinpoint one long-term tech trend that’s particularly promising, but first let’s review the tech landscape during this still-unfolding health crisis.

Some sectors, notably airlines, travel-related businesses, and energy companies, are taking it on the chin because of “social distancing” and quarantine restrictions. It will take many months for the worst hit industries to recover, even after the virus is contained. But right now, large-cap technology companies are hanging in there. In fact, they’re setting the table for significant future growth.

Scores of companies are laying off workers and beseeching the federal government for bail outs. Heavy manufacturers are particularly hard pressed, as orders for airplanes, construction equipment, and automobiles plummet. But that’s not the case for many leading tech firms. These companies were in the vanguard of the now-dead bull market. They’re likely to resume their leadership position in the stock market.

Video game makers are posting record sales. As workers are ordered to stay home, cloud activity and Internet usage are off the charts, which is a boon for companies such as Microsoft (NSDQ: MSFT). As the pandemic squelches a variety of activities, people are heavily leaning on their tech gadgets, especially smartphones made by companies such as Apple (NSDQ: AAPL).

Of course, Silicon Valley overall is fraught with anxiety and with good reason. The stocks of mega-cap tech companies have taken a pounding. We’re heading for an inevitable recession, which dampens the advertising that companies such as Facebook and Alphabet’s (NSDQ: GOOGL) Google need to survive. Tech companies have slashed their near-term financial guidance.

But once the global economy gets on the other side of the coronavirus crisis, these tech companies will be in even stronger shape. The pandemic is causing shifts in buying habits, consumer expectations and workplace practices.

Case in point: the coronavirus pandemic has generated a surge in virtual private network (VPN) usage, according to Atlas VPN. The company recently published data from its 50,000 weekly VPN users during the weeks from March 2-8 and March 9-15, showing a steep rise in VPN usage in countries grappling with significant outbreaks (see chart). 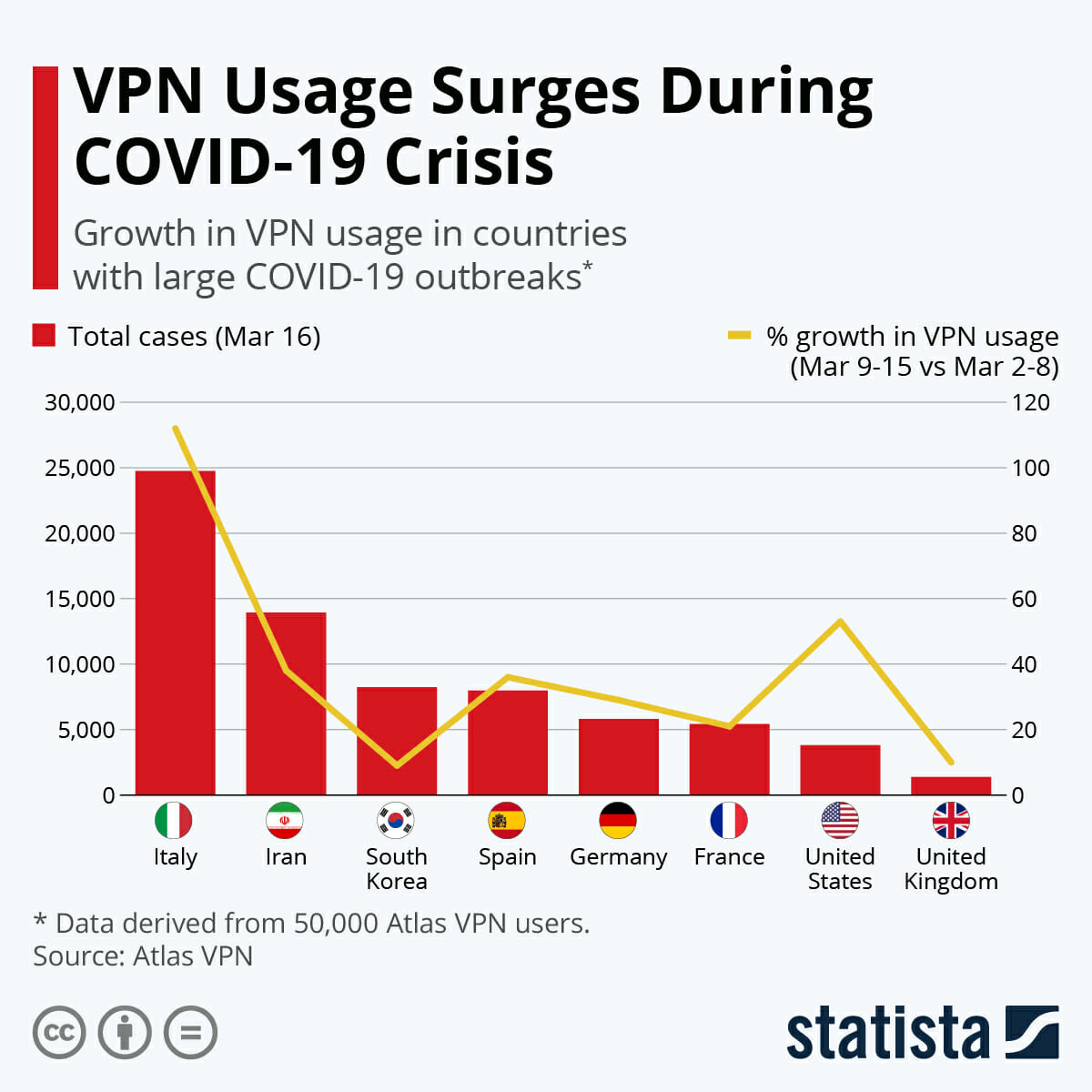 As workers get increasingly accustomed to working at home, the use of VPN networks, remote conferencing capabilities, and cloud-based collaboration are increasingly familiar activities. The importance of ultra-fast cloud computing is being demonstrated with special urgency, in homes and businesses.

5G and the Internet of Things…

At the center of these aforementioned tech trends is the Internet of Things (IoT).

IoT is a seamless system whereby everyday objects are integrated into a data-sharing network. If you’re looking for an unstoppable investment trend, you’ve found it with IoT.

Driving IoT will be 5G (“fifth generation”) technology, the latest iteration of wireless capabilities. As an investor, you should keep an eye on 5G. The companies developing and leveraging 5G are huge money-making opportunities. 5G provides faster and broader bandwidth than 4G.

5G will facilitate IoT by allowing several interconnected electronic devices and machines to communicate with each other instantaneously at ultra-fast speeds.

IoT devices exchange information with each other via a central server, without a human being as intermediary. They use sensors to communicate actionable data, such as fuel levels, inventory capacities or room temperatures, through a wired or wireless network to a software application.

IoT is giving birth to driver-less cars, self-calibrating medical devices, and smart homes, among other things. IoT also automates the delivery of services and billing, supply chains, and warehouses.

5G will pave the way for a new wave of technological advancement, which explains why so many companies both large and small are jumping onto the 5G bandwagon.

The momentum of 5G can’t be stopped, even in the age of coronavirus. That spells opportunity for the shareholders of the chipmakers, telecoms, systems builders, and device makers that benefit from lightning quick connectivity. Once the virus is contained, these stocks will soar,

Over the long haul, the biggest stock market winners are companies that defy the status-quo and introduce disruptive new technologies that create entirely new industries and products.

Imagine if you had been able to invest in Apple or Google in their early days. The emergence of 5G represents a similar window of opportunity, especially with tech stocks now trading at deep discounts.

Want details on how to profit from 5G? Click here for our technology report.