Psychedelic Mushrooms: A Real Trip (to the Bank)

Those lyrics are from the iconic drug culture anthem, White Rabbit, written and sung by Grace Slick of the 1960s psychedelic rock band, Jefferson Airplane. I’m a big fan of the band and its “San Francisco sound,” forged in the Summer of Love.

Fast forward, from 1967 to the year 2020. If you want to imbibe “some kind of mushroom,” it’s increasingly permissible in Denver, Colorado…and probably soon across the United States.

Go ask investors. I think they’ll know. There’s money to be made from magic mushrooms.

In Denver, the country’s first government panel devoted to psychedelics legalization conducted its second meeting on March 24, to discuss the implementation of a Denver decriminalization law. The panel forged an agreement on law enforcement reporting criteria for activity related to psilocybin mushrooms.

The Denver Psilocybin Mushroom Policy Review Panel was created last year after voters approved a ballot measure making the city the first in the U.S. to classify offenses related to the psychedelic fungus among the lowest law enforcement priorities.

The ordinance seeks to reduce “to the greatest extent possible” criminal penalties imposed by the City of Denver “for the personal use and personal possession of psilocybin mushrooms.”

Several mushroom species naturally contain the compound psilocybin, which has hallucinogenic properties. Magic mushrooms have earned a special place in story and song, but they’re illegal on the federal level and throughout states and localities.

The U.S. Department of Justice lists psilocybin as a Schedule I controlled substance. “Scheduling” is a system by which the U.S. Drug Enforcement Agency decides which substances are dangerous and which substances are medically useful. The Controlled Substances Act, the legislation surrounding the scheduling system, was created in 1970, when the nation’s War on Drugs was getting into full swing under the Nixon administration.

Official federal policy states that psychedelic fungi have no medicinal properties and are prone to abuse. Accordingly, it’s illegal to cultivate or possess psilocybin producing mushrooms for either personal consumption or distribution.

The consuming of psychedelic mushrooms has been associated with anti-establishment hippie types, akin to pot. But as I’ll explain, that’s changing.

There are several varieties of psychedelic mushrooms, with different potency levels. According to the research group Global Drug Survey, mushrooms are the safest recreational drug. The respected medical journal The Lancet recently came to the same conclusion (see chart). Notice that booze ranks as number one. 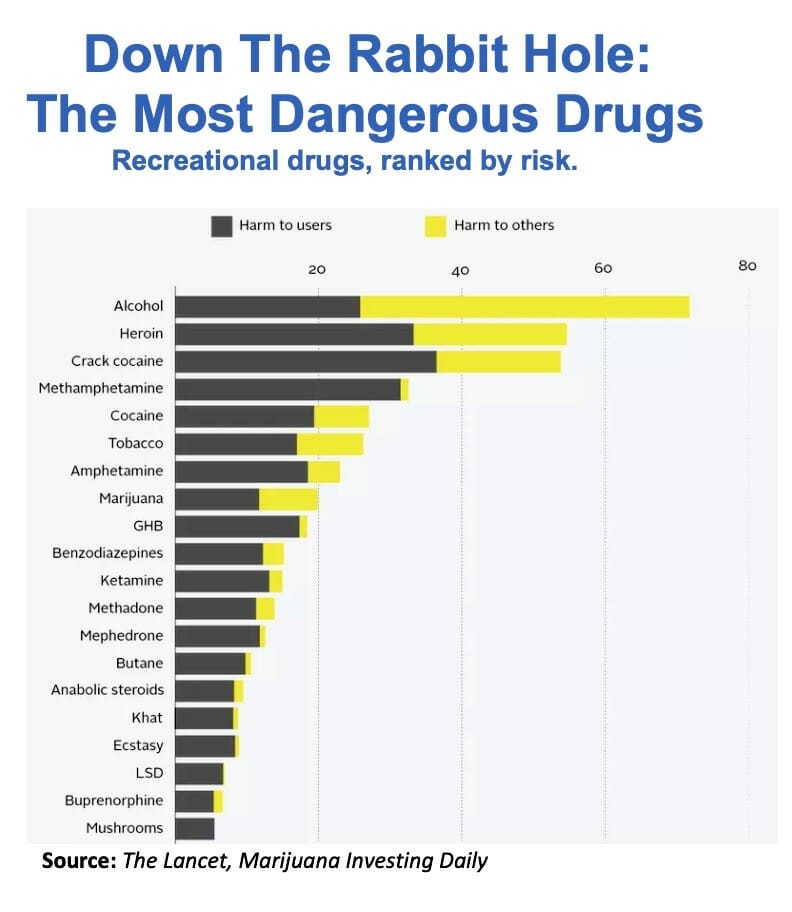 Psychedelic mushrooms have been popular long before rock rebels such as The Jefferson Airplane and The Doors sang about their virtues. For centuries, Indians in the Americas have revered hallucinogenic mushrooms as sacred. Some Indian tribes even call these mushrooms “god’s flesh.”

To this day, the plant is widely used around the world. The legal status of psilocybin mushrooms varies from country to country. Whether out in the open or covertly, the mushrooms are deployed in social and religious rites to conjure spiritual visions and treat illnesses. Shamans, mystics and seekers eat the mushrooms to explore their inner worlds and contact spirits.

Take that smirk off your face. There’s an expanding body of medical research that empirically proves how psilocybin can treat a host of physical ailments, such as arthritis, as well as psychological ones. Medical researchers in the U.S. are developing a treatment for depression using psilocybin. For chronic diseases that resist conventional treatments, mushrooms often work magic.

Before I go further, a quick disclaimer: Our investment team is agnostic as to whether the legalization of formerly illicit drugs is morally “good” or “bad.” Some investors shun tobacco, firearms, alcohol, military, and marijuana investments because they’re viewed as “sin” stocks. That’s their right. But as an investor, I prefer to view the world as it is, not as I may want it to be. And efforts to legalize marijuana…and now psychedelic mushrooms…represent an unstoppable and lucrative trend.

Although the Denver ordinance doesn’t legalize the mushrooms, it would “prohibit the city from spending resources to impose criminal penalties” on those who have them. (Denver’s mushroom initiatives highlight the semantic difference between “legalization” and “decriminalization.”)

Small businesses are sprouting up in Denver to meet the growing demand for mind-altering mushrooms. It won’t be long before these cottage industries mushroom (pun intended) into a multi-billion-dollar industry.

We saw it happen with cannabis. First it was marijuana to evolve from illicit counter-cultural activity to mainstream consumerism.

At this week’s meeting, the group agreed on various factors that should be included in reports (e.g., age of user) about enforcement of psilocybin laws as the city tracks implementation of the measure.

Denver’s permissive stance on mushrooms has triggered a cascade of similar initiatives across the nation that seek psychedelics reform.

In California, the Oakland City Council recently approved a measure to make a wide range of psychedelics among the city’s lowest law enforcement priorities. Santa Cruz has followed in Oakland’s footsteps. Activists in more than 100 cities are now pursuing similar policy changes.

Companies that grow, process and sell magic mushrooms are in their infancy, as was the case when marijuana legalization was about to take off. The best time to profit from accelerating trends is early, before the rest of the investment herd catches on. The movement to legalize psychedelic mushrooms is an exciting development that will make proactive investors wealthy.

This publication is devoted to marijuana investing, but “psilocybin profits” is an ancillary topic that I will be closely monitoring. Stay tuned for further developments. As the move to legalize magic mushrooms gathers speed, the trend is likely to propel the already established movement to legalize cannabis. What’s more, we’ll probably start to see cannabis companies branching out into psychedelics.

As the song goes, feed your head. For our latest report on the best marijuana investments, click here now. Consider it food for profitable thought.

John Persinos is the editorial director of Marijuana Investing Daily. You can reach him at: mailbag@investingdaily.com