The Sun Will Shine on Solar Again

It’s no secret why the one-two punch of the COVID-19 pandemic and the Saudi-Russo oil price war has clobbered oil stocks. When oil prices are high, oil producers make more money, and they have more incentive to explore and produce, which then helps oil services companies. When oil prices fall, the opposite dynamic occurs and the industry suffers.

But the oil crash also has caused another group of companies to lose a lot of market value: renewables. This price chart of the benchmark exchange-traded fund iShares S&P Global Clean Energy (ICLN) tells the story. 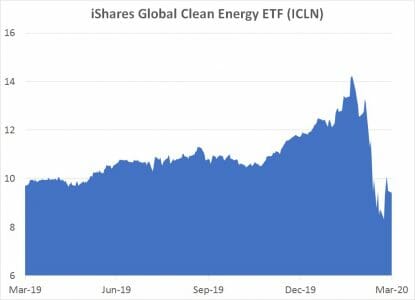 However, if we look at recent history, the oil crash that started in 2014 and bottomed in 2016 did not slow the advances in renewables such as wind and solar. Today, both wind and solar are at record high levels in terms of installed capacity. Thanks to falling costs, both wind and solar power have reached grid parity in some parts of the world.

Grid parity means that the cost of an alternative source of energy is equal to or lower than that of the electricity grid, where most consumers traditionally get their power. In particular, as the chart shows, the uptake of solar power has accelerated in recent years, thanks to greater efficiency, power storage improvements, and falling costs for photovoltaic (PV) cells.

Unfortunately, this time around, renewables are battling not only cheap oil, but also the dramatic slowdown in economic activity and city shutdowns to try to contain the coronavirus outbreak. Home renovations or constructions are also being postponed or cancelled due to the pandemic. This means fewer solar panel installations.

Moreover, disappointingly, the renewables industry was left out in the cold by the U.S. government. The $2.2 trillion stimulus package contained no specific help to the industry, with aid aimed at industries with more pressing needs. Consequently, the pain for renewables could last into next year, perhaps longer.

However, even if they have hit a bump in the road, renewables will continue to grow over the long term. As already noted, costs have been falling and will continue to fall over time. Solar, in particular, had become the cheapest way to generate energy in many markets and enjoys a steady energy source, i.e. the sun.

On the other hand, oil always seems to be a terrorist attack away from skyrocketing. In any case, $20 per barrel oil is not sustainable and oil prices will rise again. In addition, even though they may not be President Trump’s favorites, global renewables have largely enjoyed favorable regulation.

One particular stock we like in the beaten-up solar patch is Sunrun (NSDQ: RUN). The company is a leading installer of residential solar systems. It’s also a leader in virtual power plants (VPP).

A VPP works like a power plant, except without the need to build the massive infrastructure. It works by remotely combining energy resources from different locations into an efficient power-distribution network, through the use of smart-grid technology.

VPPs are still very new to the game but they could become the power plant of choice in the future. They are more flexible and scalable, and they won’t be brought completely offline by failure in one component. Also, you don’t need to build a huge power plant. However, they have yet to gain widespread regulatory support as skeptics feel they could be more vulnerable to cyberattacks than a traditional centralized power plant.

Sunrun has several VPP projects in the works. One recent major deal is with utility Hawaii Electric (NYSE: HE), which has our nation’s largest solar penetration. Under this project, Sunrun’s installed solar panels and batteries will supply power to Hawaii Electric, which can then distribute the power to other areas as needed.

Sunrun isn’t without risk. It has a lot of debt, which is another reason the stock price cratered as the market fell. However, it helps that the Federal Reserve has aggressively pushed interest rates to zero to foster liquidity, which makes it easier to service debt. Lower rates also boost construction activity.

Assuming that Sunrun weathers through the current challenges, its leading positions in residential solar installation and VPP make it one of the most intriguing renewable stocks to watch.

Editor’s Note: Our colleague Scott Chan just provided you with well-timed investing advice concerning a “Stock to Watch.” During these tumultuous times, with coronavirus whipsawing markets, there’s another Investing Daily expert you should consider. His name is Jim Fink, chief investment strategist of our premium trading service Velocity Trader.

Jim has developed a scientific way to quickly and predictably multiply the gains of regular stocks. This technique works in up or down markets, in economic expansions or recessions…in normal times or during pandemics.

Called the Velocity Profit Multiplier (VPM), Jim’s proprietary investing method allows you to jump into trades with complete confidence because you know that when share prices move in the right direction, VPM will juice up your returns by 100%, 200%, even 500%… every time…in less than a month. Without fail. Even better, this scientific system turns around these profitable trades in 60 days or less.

As you read this, Jim Fink is setting up his next trades. Want to get onboard? Click here now.