A Sector Turnaround Play That Could Hit The Gas

A neighbor of mine recently inherited some money. Greg’s father passed away a few months ago. He and his two siblings split what was left in dad’s bank account.

So, he called me a few days ago to talk about his options. Further below, I’ll explain what advice I gave him.

Fortunately for Greg, he is in solid financial shape. He owns an auto repair business that was doing quite well before the coronavirus outbreak.

He’s not worried about the business failing. Instead, he is using the current lull in activity to make some overdue improvements to his shop.

Since he already has adequate savings, what Greg really wants to do with this money is put it in the stock market. The way he sees it, it’s only a matter of time until the economy gets back on track.

I told Greg that I would avoid buying individual stocks. Instead, I would use an exchange-traded fund (ETF). That way, I avoid the risk of being right about a sector but wrong on the specific stock.

Further, I would buy an ETF in a sector of the economy that is getting hit hard now but could rebound strongly later this year once the virus is contained. In particular, I prefer products that will experience a “slingshot” effect of pent up demand resulting in a surge of sales.

After giving it some thought, I suggested to Greg that he take a look at the First Trust NASDAQ Global Auto Index Fund (CARZ). CARZ is a relatively small ETF with only $13 million in total assets.

Until a few months ago, CARZ had been trading sideways for the past several years as new vehicle sales plateaued. CARZ is down 24% this year, a third more than the 18% decline in the S&P 500 Index. 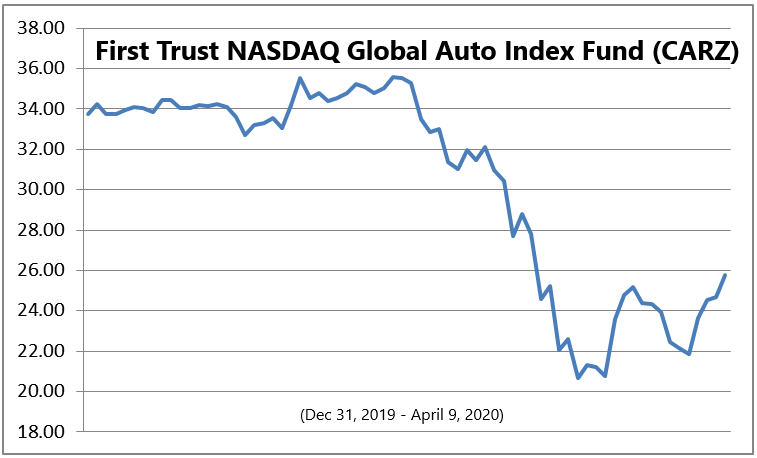 That’s no surprise. Vehicle sales in the U.S. dropped 38.4% in March and could do even worse in April. Although most auto dealerships remain open, customer traffic has all but come to a standstill.

After all, why risk getting the virus now over something that most people can put off for as many months as necessary until the scare has passed? And that is precisely why I believe this fund will rebound strongly when that day comes.

Unlike the restaurant industry, where a meal lost today is never recovered, a car sale can be deferred. Last year, the average age of a light vehicle in the U.S. was 11.8 years, so they do not turn over quickly.

It is not unreasonable to assume that most car sales not transacted during the coronavirus pandemic will happen once it is over. When that occurs, we could see some of the best monthly car sales figures in recent history.

Normally, I would never suggest that someone put all of their money in a single fund. In this case, Greg has plenty of other money invested in a wide variety of assets so I was comfortable making this recommendation to him.

What I would never do is recommend that someone put all their money in a single stock. Just look at Tesla. Over the past two months, TSLA has traded above $900 and below $400. On a smaller scale, Ford Motors (NYSE: F) repeated that pattern when it started this year above $9 and fell below $4 a few weeks ago.

If it weren’t for Tesla, the stock chart for CARZ might look considerably worse. Tesla has disrupted the auto industry similar to what Amazon.com (NSDQ: AMZN) did to the retail business.

Lately, many retailers previously believed to be moribund have shown new signs of life. That’s because they adapted to changes in consumer behavior as a result of Amazon. And that’s exactly what I think will happen in the auto industry as evidenced by Ford’s recent introduction of the Mustang Mach-e battery-powered sports car.

Now, here is the part that I did not tell Greg. If he really wanted to make a bet on a recovery in the auto sector, he could buy call options on several of the major car companies. That’s not my area of expertise, so I did not feel comfortable recommending it.

However, that is the expertise of my colleague, Jim Fink.

As chief investment strategist of Options for Income, Jim has made huge profits for his followers with his adept trading of options.

In fact, Jim has developed an options trading system that allows you to collect payments every Thursday, similar to a paycheck. Think of it as a “profit calendar.”

It’s like getting an extra paycheck, week in and week out. The gain is so reliable, you can schedule it on your calendar. Jim made himself a wealthy man with his system. Now he wants to share his secrets with our readers.

How does Jim Fink do it? Click here for his presentation.