An Early Warning Signal for the Stock Market

As the coronavirus pandemic goes, so goes the stock market. That has become the mantra on Wall Street, and for good reason. Until people can safely leave their homes to work, play, and shop, the economy is frozen in place.

Further below, I’ll provide you with an early warning system that should let you know which way the stock market is likely to turn next. But first, let’s take a quick look at an unconventional approach to monitoring progress against the pandemic.

The coronavirus outbreak originated in Wuhan, China. The city went into lockdown on January 23, from which it only recently emerged. A lot of attention is being paid to how quickly it recovers to get a sense of how the rest of the world is likely to fare.

One way to do that is by monitoring the Air Quality Index (AQI) in Wuhan, which is heavily influenced by factory emissions. With Wuhan opening back up for business on April 9, analysts have been tracking its AQI to get a sense of the level of economic activity.

This year, there were several days in February and March (while the factories in Wuhan were closed) when the AQI was rated “good.” In recent years, that was never the case. In fact, those two months consistently have some of the worst AQI for the entire year.

April is usually pretty bad, too. The “good news” is air pollution has gotten steadily worse in Wuhan since it reopened two weeks ago. In fact, Wuhan has already recorded as many “unhealthy” days in April (3) as it did last year with the month not yet over.

That suggests factory smokestacks in Wuhan are once again belching pollutants into the atmosphere. Based on this metric, it appears that the factories in Wuhan are operating near full capacity.

In addition to tracking AQI, there are other methods for gauging economic activity in China. One of the simplest is to follow businesses that feed China’s supply chain or sell exclusively to consumers in China.

Just about every publicly traded company in the world has direct or indirect exposure to China. However, some have more exposure than others. In particular, I believe the three stocks below provide an accurate barometer of China’s economic health.

As I stated in a recent Personal Finance update, I view BHP Group (NYSE: BHP) as the “canary in the coal mine” when it comes to the Chinese manufacturing sector. Based in Australia, BHP provides China with iron ore, copper, petroleum, and coal used in steel production and energy consumption.

A few days ago, BHP released a quarterly “Operational Review” that anticipates no reduction in iron ore shipments to China this year. However, if BHP starts cutting back on shipments to China, the global economy may be slowing down.

When China quarantined Wuhan in late January, shares of fast-food operator Yum China Holdings (NYSE: YUMC) fell 20%. Yum runs more than 9,000 KFC, Pizza Hut, and Taco Bell restaurants in China, nearly a third of which closed down as the coronavirus pandemic swept through the country.

Now, many of those locations are reopening and YUMC is back to where it was trading in December. But if YUMC starts heading back down that may mean more people are staying at home due to a recurrence of the virus.

One of the most reliable gauges of economic health in any country is airline travel, which drops when unemployment is rising and companies are short on cash. When China shut down Wuhan three months ago, it came as no surprise that China Southern Airlines (NYSE: ZNH) lost nearly half its value.

Since bottoming out March 23, ZNH has rallied 25% to recoup some of that loss. As China’s economy regains momentum, so should ZNH. But if ZNH starts losing altitude again, that’s probably a sign the economy still faces significant headwinds.

A simple way to track economic activity in China is to combine all three of these stocks into a “China Three Stock Economic Activity Index” and track its progress. Although consisting of only three companies, this index should accurately reflect the level of confidence that China’s economy is on the road to recovery.

Not surprisingly, these three stocks peaked (January 17) and troughed (March 23) on the same days as the S&P 500 Index. However, what is surprising is that since bottoming out on March 23, the S&P 500 is up 28% versus a gain of only 17% in the China Three Stock Economic Activity Index. 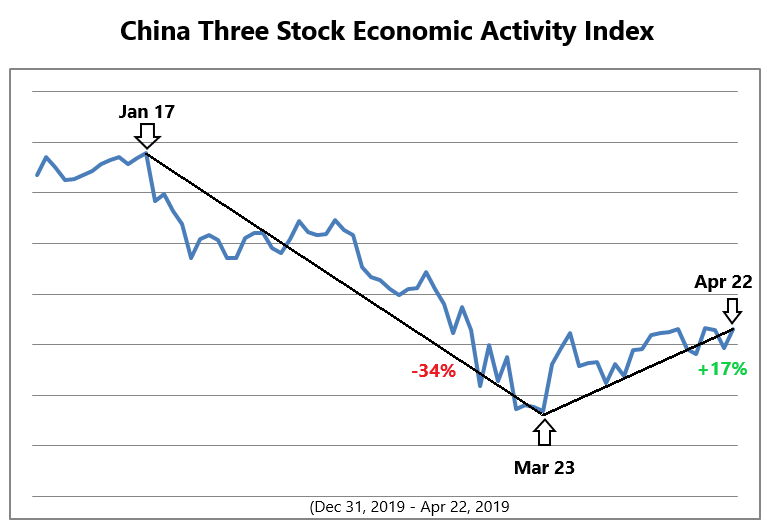 Editor’s Note: Our colleague Jim Pearce just alerted you to a stock market warning signal, to help guide you through these risky times. The coronavirus pandemic has plenty of investors spooked, but you should stay in the game.

Despite the uncertainty and volatility we’re witnessing these days, there are plenty of opportunities to make investment profits. You just need to know where to look.

One of our experts is ready to reveal his full list of 86 winning trades, for gains as high as 320%…256%…even 760%. No gimmicks. You can reap these gains from regular stocks you can get from an off-the-shelf trading account. Click here for details.