Looking for a detailed review of VIP Voice?

Perfect, you’re in the right place! 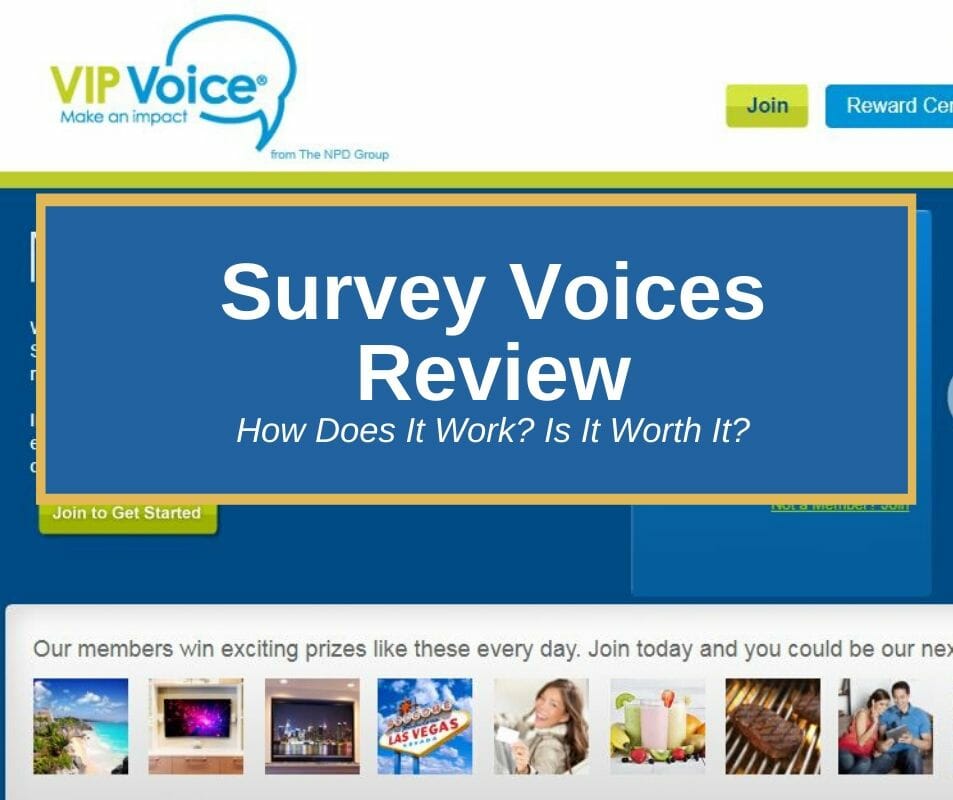 In this guide you’ll learn:

If you’ve ever considered taking online surveys to make extra money, at some point, you’ll come across VIP Voice. A unique option in the world of paid survey sites, VIP Voice is a simple way of earning some amazing rewards just for completing surveys online.

However, is it right for you? Every survey site is different, so it’s important to learn as much as you can about a company before you sign up for their survey site. To get you started, we’ve got a complete VIP Voice review, coming up next.

What is “VIP Voice”?

VIP Voice is an online survey site that allows you to enter sweepstakes and win various prizes, like gift cards, HD TVs, or vacations just for filling out surveys. The site is owned by the New York-based NPD Group, a well-known market research company that’s been in the business since 1967.

However, unlike most other survey sites, VIP has an auction and sweepstakes-based rewards system where you can enter to win rewards instead of getting a guaranteed payout. The site boasts that it hosts more than 12 million of its own surveys online each year, which is a whole lot of surveys when compared to some of its competitors.

How Does VIP Voice Work?

In many ways, VIP Voice works a lot like other survey companies. Basically, VIP Voice and other market research companies are paid by corporations and organizations to gather data from actual consumers.

To do so, VIP Voice creates surveys that they host on their website. Then, they invite people just like you to join their site by making an account.

Once you have an account, you can start to take VIP Voice surveys. In exchange for your time, you receive a certain number of points based on the length and complexity of the survey.

Here’s where VIP Voice mixes things up a bit. Unlike other survey sites that are designed to help you make money online, VIP Voice does not have guaranteed payouts or any guarantee that you’ll earn rewards through their site.

Read Also: Which survey sites are actually worth it?

Instead, VIP Voice gives you “VIP Points” for every survey you complete which then get added to your account. Eventually, when you have enough points, you’ll have a chance to claim your payout.

However, VIP Voice doesn’t give you the option to trade your points for cash prizes, Amazon gift cards, or any other guaranteed reward. Instead, you then take your points and head over to SweepLand or BidLand (two of NPD Group’s affiliate sites) to try and win yourself a reward.

On SweepLand, you can take your points and trade them in for sweepstakes entries. Basically, the more points you trade in, the more likely you are to actually win something. The prizes you can win on SweepLan are pretty good, but if you don’t win, you lose your points.

If you choose to head to BidLand, however, you can trade your points for auction bids. BidLand auctions are known for selling off some fantastic prizes to the highest bidder but, again, there’s no guarantee that you’ll win anything.

Plus, you need to complete quite a substantial number of surveys to be able to bid on anything worth more than $25. So, you need to spend a lot of time on VIP Voice to maximize your rewards because of their unique reward system.

Okay, so at this point, you’re probably asking yourself if VIP Voice is legit or if it’s a waste of time. The good news is that VIP Voice is, indeed, a legit survey site and is not a scam.

In fact, their parent company, the NPD Group, boasts an A+ rating with the Better Business Bureau (BBB). The NPD Group has been a BBB Accredited Business since 1972 and has been in operation for nearly 70 years, so it’s quite reputable as an organization.

While the company has certainly had some unhappy customers in the past, the fact of the matter is that they are a legitimate, reputable company. However, some people get frustrated with the site because VIP Voice, unlike other survey sites, is not about making money.

Since VIP Voice gives out rewards through sweepstakes and auctions, many people find that the website isn’t worth their time. However, if you’re less interested in earning money and keen to win some good prizes, then you’ll be happy to know that VIP Voice is a legitimate site.

​How Much Money Can You Make With VIP Voice?

Unfortunately, with VIP Voice you can’t really make money by taking surveys. So, if you’re looking to earn some extra cash through online surveys, a different site might be more appropriate.

However, if you’re interested in winning prizes through surveys, then VIP Voice is a solid option. That being said, it’s incredibly difficult to determine precisely how many points you’ll get for completing a survey through VIP Voice.

While other companies will tell you how many points you’ll earn before you take a survey, with VIP Voice, the number of points you get is determined by the length of the survey and your “reward level.” Basically, the more surveys you take on the site, the more points you get to earn for each survey.

So, it’s more or less impossible to determine precisely how many points you’ll get in exchange for your time. Plus, it takes a large number of points to be able to win anything on SweepLand or BidLand, so this isn’t a good site if you’re looking for instant gratification.

But, some of the prizes you can win on VIP Voice are well worth the effort. Most of VIP Voice’s rewards far exceed what you can ever hope to get on other sites that pay you between $0.25-$1.00 per survey.

Read Also: Can you earn money with Survey Club? Read Our Review

At the end of the day, while you don’t make any guaranteed money on VIP Voice, you do have a chance to cash in on awesome prizes like vacations, electronics, and credit card gift cards. Just keep in mind that you may have to save up for a very, very long time (think months or years) to get a substantial prize on VIP Voice.

How To Sign Up And Get Started With VIP Voice?

If taking surveys for a chance to win a good prize sounds like something you’re interested in, a VIP Voice membership just might be right for you. Thankfully, signing up for VIP Voice is free and simple. Here’s what to do:

What Are The Pros And Cons Of VIP Voice? 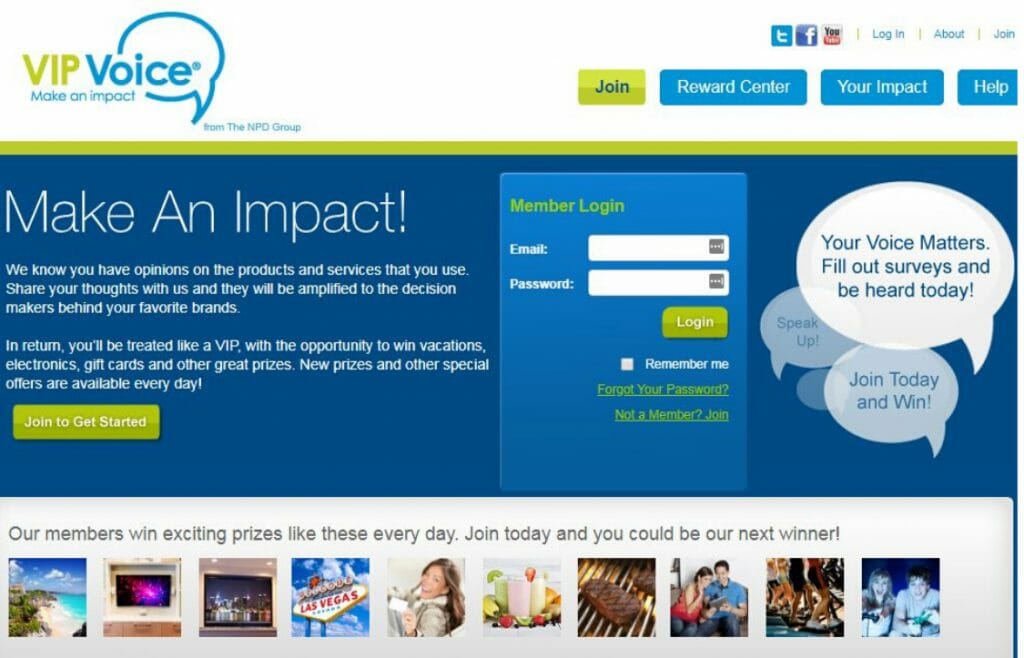 Like any online survey site, VIP Voice has its advantages and disadvantages. Here are some of the pros and cons of using the site:

What Are the Alternatives To VIP Voice?

Not sure that VIP Voice is right for you? Here are some of your alternatives:

Swagbucks is a very popular platform where you can make money through surveys and other tasks. Unlike most survey websites, Swagbucks allows you to maximize your earnings potential by playing video games, shopping online, and watching videos in exchange for points.

With Swagbucks, you can later trade in your points for gift cards or cash through PayPal. While taking surveys and earning points through Swagbucks won’t get you rich, it is a highly reputable site that is perfect for an online side hustle.

Toluna is a lesser-known online survey site that allows you to earn cash or win a variety of prizes just for filling out surveys. This Paris-based company welcomes members from over 57 different countries and is sort of like a survey site/social media platform hybrid.

On Toluna, you can take surveys in exchange for points. Or, you can create your own polls, test products, and make statements about products that other Toluna users can vote on. All of these actions earn you points that you can later trade for prizes or even cash on the Toluna platform.

Perhaps the most popular survey site out there, Survey Junkie is a solid way to earn small amounts of cash in your spare time. While you won’t get rich on Survey Junkie, they offer a huge range of different surveys that you can take from the comfort of your own home.

The amount of time you spend on the site more or less directly correlates with how much you can make. However, Survey Junkie only offers surveys, so if you’re interested in watching videos, surfing the web, or doing other tasks for money, you might want to head elsewhere. But, Survey Junkie does have a low payout threshold (just $10), so you can quickly cash in on your reward.

Bottom Line: Is VIP Voice Worth It?

However, if you have some extra time on your hands and want the chance to win some pretty cool prizes from the comfort of your couch, then VIP Voice might be a solid option. In the end, VIP Voice is a reputable site that can earn you cool rewards, but it’s not a good platform for people that want to make money online.

Shane has experience in the realm of accounting and finance. He's worked for local, regional, and national sized accounting firms. He's supported clients ranging from individuals to multinational organizations. Shane also has experience in both the private and public sectors.