COVID-19 Investing: How to Beat The Herd

The April rally reminds me of a quote from famous movie villain Gordon Gekko, who said of investors who blindly follow market sentiment: “They’re sheep, and sheep get slaughtered.”

The 11-year bull market that began in March 2009 died in March 2020, as stocks from February to March posted their worst declines since the global financial meltdown of 2008. In April, stocks bounced back to post their best month in about 30 years. This spring, the phrase “in like a lion, out like a lamb” was turned on its head.

During stock market comebacks like these, the financial press ridicules the skeptics and lauds the self-confident optimists. But I’m old enough to remember hearing the “pundits” say in 2008 that the sub-prime mortgage market wouldn’t be a problem. Or the analysts in 2000 who said fledgling Internet stocks were ushering in a glorious bull market that would last for years.

Some of these very same people are now telling us that the coronavirus pandemic is mostly behind us and the economy will quickly return to normal. I’ve learned to regard this pundit class as a reliable contrarian indicator.

April’s bounce back could be a bear market trap and a prelude to the testing of coronavirus crash lows. Investors right now seem driven by a Fear Of Missing Out rather than the macro-fundamentals.

Below, I steer you toward two safe havens that make sense amid current uncertainty. First, let’s dissect the market’s momentum to see if it has legs.

The Dow Jones Industrial Average is up by about 33% since its late-March closing low, leaving the index down 18.3% from its February record closing peak. The S&P 500 and the technology-heavy NASDAQ Composite indices are up 31% and 30%, respectively from their late-March troughs and down 13% and 8% from their respective record highs. 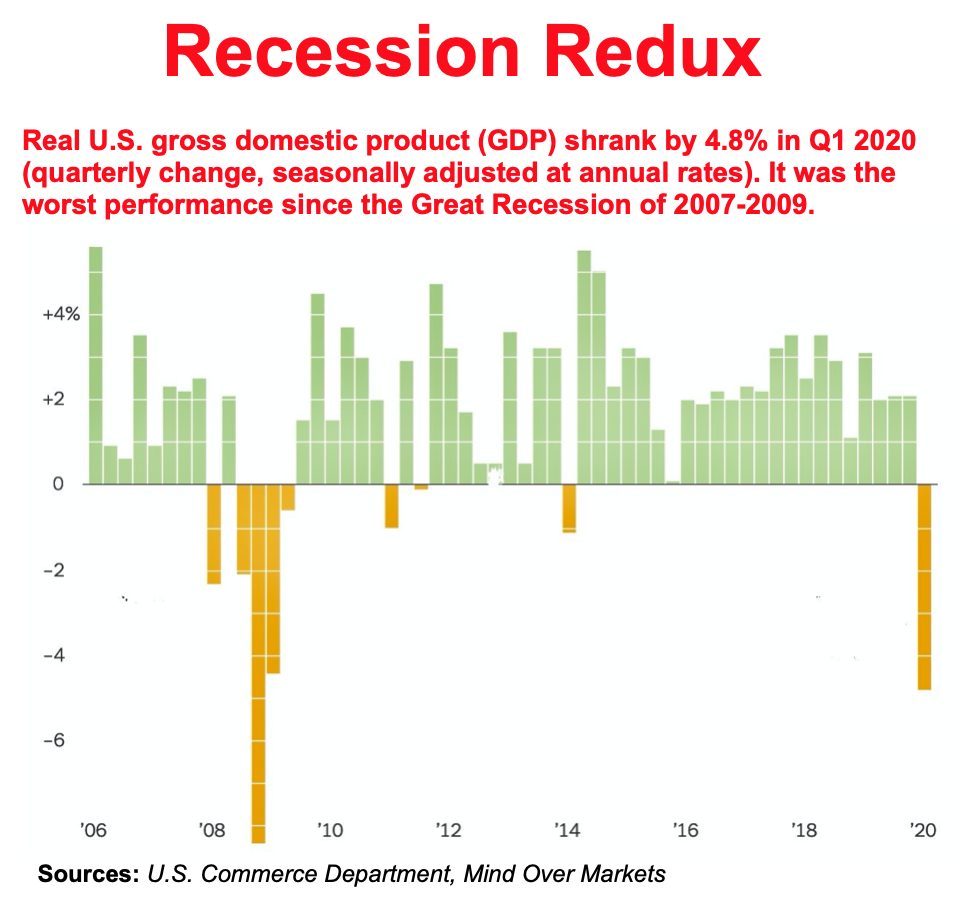 Brace yourself, because the worst is yet to come. The Q1 GDP numbers don’t fully account for social distancing and the shuttering of businesses due to the coronavirus pandemic.

Most economists predict that data for the second quarter will show GDP contracted at an annual rate of 30% or more, a level that conjures images of the Great Depression of the 1930s.

And yet, partisan hacks on television are bleating that the economy will be just fine by summer. Don’t fall for the happy talk. The non-partisan Congressional Budget Office (CBO) on Monday projected that the economy won’t return to its pre-pandemic level until 2022 at the soonest. Perhaps the CBO is being too pessimistic and the truth lies somewhere in the middle. Regardless, the economy can’t be turned back on, as if flipping a switch.

One thing is certain: the pandemic has burst the corporate debt bubble. Major retailers have hired restructuring advisers and teeter on bankruptcy. Blue-chip companies have seen their debt downgraded to junk status. The severe bear market in oil prices is expected to trigger a tsunami of bankruptcies among energy companies.

And yet, the stock market rallied in April. You can thank the Federal Reserve, which has been frantically pumping liquidity into the capital markets to a far larger degree that it did during the great financial crisis more than a decade ago. That’s great news for stock investors…while the party lasts.

On March 23, the Fed cobbled together a package of loans and other types of credit, totaling around $4 trillion. Then on April 9, the Fed provided an additional $2.3 trillion in loans. The central bank has even stated its willingness to buy the bonds of crippled large-cap sector bellwethers whose debt has fallen from investment grade to junk status.

Investors were cheered Wednesday when Fed Chair Jerome Powell said the central bank would use whatever tools available at its disposal to support economic growth. He also urged Congress to provide more stimulus. Stocks sharply rose yesterday, spurred by Powell’s remarks as well as optimism over a possible COVID-19 vaccine.

However, as of this writing Thursday morning, the three major U.S. benchmarks were trading deeply in the red in choppy trading, in the wake of grim unemployment and consumer spending data.

Problem is, the Fed’s intervention on a massive scale leads to equity market distortions with stocks decoupled from fundamentals. It’s hard to fathom how stocks can stay aloft when the economy is cratering, unemployment is soaring, and corporate earnings are posting double-digit negative growth.

Meanwhile, toxic debt is piling up among a coterie of companies that are “too big to fail.” Sound familiar? I worked as an investment analyst during the Great Recession and now, 12 years later, I’m getting a strong sense of déjà vu.

Another warning sign is chaos afflicting the energy sector. When a staple commodity plunges to negative value, it signals an inflection point in not just the relevant sector but also the global economy. Wars have been fought over crude oil, but a week ago, traders were willing to pay you to take it off their hands.

I’ve been thumping the table lately about gold…with good reason. Current conditions are exceptionally favorable for the yellow metal.

I prefer owning gold mining stocks to physical bullion or investing in funds. If you own gold mining stocks and the price of gold goes up, the notion of “operating leverage” comes into effect. A bump in gold prices will likely exert an exponentially huge boost on a gold producer’s top line revenue.

Because the gold producer doesn’t have to put a whole lot of additional labor or capital into digging out increasingly valuable gold, its earnings per share should go up and take the stock’s share price with it. For a well-positioned gold mining play, click here for our special report.

In a sharp and prolonged downturn, such as the one we witnessed during the 2007-2009 Great Recession, utilities typically do a superb job of retaining their value relative to the overall market.

Consider this: investors in growth stocks suffered losses of between 40% and 60% in 2008, while the average portfolio of Utility Forecaster (an Investing Daily publication) was down only 18.2%, according to data from The Hulbert Financial Digest.

Throughout the savage 2008 downturn, utility stock investors enjoyed reduced losses and a steady stream of dividends. For a list of the best dividend-paying utilities stocks now, click here.

Questions about safe haven investments? Drop me a line: mailbag@investingdaily.com

John Persinos is the editorial director of Investing Daily. He also serves as the managing editor of Utility Forecaster.