An Inside Track to the Stock Market’s Future Direction

Looking for a clue as to which way the stock market will turn next? If so, forget about traditional metrics such as employment figures and manufacturing activity. The coronavirus pandemic has blown up those numbers for a while.

But there is one indicator that I believe will provide an accurate measure of which way the economy is heading. Further below, I’ll show you how you can book a fat profit from its next change in direction.

No, I am not referring to the “cardboard box index” tracked by the Federal Reserve Bank of St. Louis. So the theory goes, more cardboard boxes equates to more consumer spending. The more goods we buy, the more boxes needed to transport them to their final destination.

Consumer spending is highly correlated with the overall health of the economy. When consumer confidence is high, the money flows. But when confidence falls, people spend less and save more. For that reason, the concept behind this index makes sense.

There’s only one problem with its accuracy as a stock market predictor; it doesn’t work. Over the past 10 years, it has increased steadily in value with only one notable decline. It dropped sharply last summer, just before the SPDR S&P 500 ETF Trust (SPY) shot up 10% in value.

More importantly, the cardboard box index failed to portend the stock market’s big drop during the fourth quarter of 2018. In fact, the index barely budged while the SPY dropped 20% over those three months and then rallied 25% over the next four months. This year, it did not decrease until March after the stock market had already started its steep decline.

If anything, the cardboard box index appears to be a more accurate barometer of the shift towards online shopping. When you buy something in a store, you put it in a bag and take it home. But when you buy something online, it is put in a box and shipped to your house instead.

I believe a more accurate leading indicator of the overall direction of the economy is the Cass Freight Index (“CFI”). The CFI tracks freight shipping volume within the United States.

In 2018, the CFI peaked in May and fell the next three months prior to the stock market’s big drop. More recently, the CFI peaked last September and fell over the next four months preceding the SPY’s 35% plunge during the first quarter of this year. 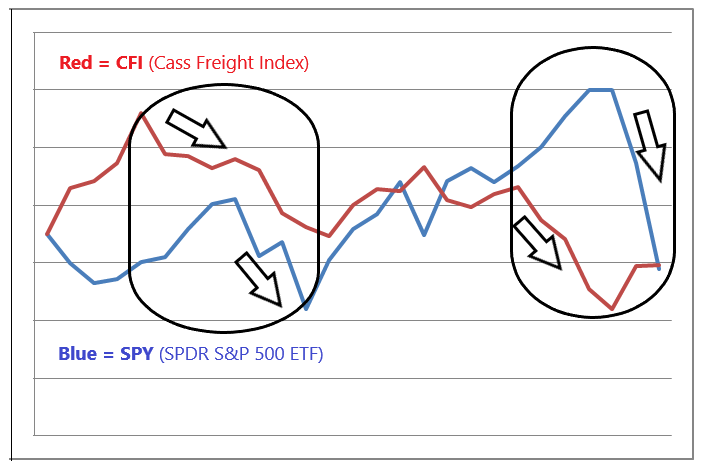 In the summer of 2018, the Trump administration escalated its trade war with China by increasing import tariffs. That resulted in fewer goods coming into the United States and less demand for shipping.

In that case, the explanation for why the CFI worked so well is apparent. However, nobody could have possibly known last September that a global pandemic was on the way.

Who knows, perhaps the stock market would have suffered a steep correction this year even without a global pandemic. Nevertheless, the decline in the CFI during months leading up to the pandemic was much steeper than in 2018, suggesting the economy was about to hit the brakes.

The good news is the CFI turned positive in February and rose again in March. I’ll be watching it closely to see how it performs in the months to come. If it continues its upward trend, that presents an investment opportunity that can be executed with a single trade.

There are many ways to play an expected increase in freight traffic in the United States. You could spread your money around a handful of railroads and trucking companies such as CSX (NSDQ: CSX) and J.B. Hunt (NSDQ: JBHT). Or you could buy a package delivery company like United Parcel Service (NYSE: UPS).

But if you really want to mimic the change in freight traffic, I suggest using the iShares Transportation Average ETF (IYT). It is a small fund with only $460 million in net assets that has gone largely unnoticed during the stock market’s infatuation with tech stocks.

This fund’s top three holdings are railroads: Norfolk Southern (NYSE: NSC), Union Pacific (NYSE: UNP), and Kansas City Southern (NYSE: KSU). Along with CSX, these four commercial freight carriers comprise more than a third of the fund’s total assets. If there is an uptick in freight traffic, this fund should feel it.

Despite the recent rise in shipping volumes, the IYT has rebounded only mildly over the past month and is down 27% for the year. If the CFI’s accuracy as a leading indicator holds true, IYT should rally strongly later this year. A return to its price at the start of the year would represent a gain of 36%.

That’s a good result, but you can do a lot better than that. Instead of owning IYT, consider buying call options on it instead (a call option increases in value when the price of the underlying security goes up).

Last week while IYT was trading near $141, a call option expiring on September 18 with a strike price of $140 could be bought for $13. For this trade to be profitable, IYT would have to rise above $153 within the next five months.

Let’s say IYT is trading at $160 on September 18. If you bought the stock at $141, you’d have a gain of 13.5%. But if you bought the option, your profit would be 53.8%. Of course, if ITY falls below $140 at expiration then that option would have no value. That’s the tradeoff for the opportunity to earn huge returns.

However, if that type of trading is too speculative for your tastes, there are safer ways to earn solid returns. Consider the methods of legendary trader Jim Fink.

Jim Fink is the chief investment strategist of the premium trading service, Jim Fink’s Inner Circle. Jim has developed a way to quickly and predictably multiply the gains of regular stocks.

Jim is now making you a promise. If the recommendations you get from his Inner Circle advisory don’t give you the opportunity to turn $5,000 into $50,000 in the next year, simply give us a call and we’ll give you another year free of charge.

Jim has put together a new presentation, in which he discusses how to make market-crushing profits, whether the market is going up…down…or sideways. Click here for details.