Sometimes I feel more like a sportswriter than an investment analyst. Rather than an epic battle between two titans, the U.S.-China rivalry increasingly resembles two exhausted boxers who flail at each other for 12 grueling rounds. The goal isn’t to decide who will win, but instead to determine who will avoid the humiliation of going down first.

Tensions between Washington and Beijing erupted yesterday, with the White House blocking investments in Chinese stocks by a U.S. government retirement fund. The official reason cited was the fund’s investment in “risky” Chinese companies that pose national security threats.

For the incumbent U.S. administration, it’s politically advantageous to play hardball with China, especially in the context of negative headlines about the pandemic. That means Sino-American tensions are likely to escalate all the way up to the November presidential election.

Below, I’ll show you why the U.S.-China rivalry is underscoring an exciting money-making opportunity. This profitable investment theme is resistant to political posturing, economic downturns, and even pandemics. It’s as close to a “sure bet” as you can find in the investment world. But first, let’s delve into the real meaning behind the news headlines.

Many investors made the mistake of thinking that the Sino-American trade battle was over. I’ve periodically warned readers that most tariffs remain in effect and we’d likely see a resumption of tit-for-tat trade sanctions in this bitterly fought presidential election year.

Beijing has yet to respond to the latest U.S. moves against Chinese investments. Regardless, geopolitical gamesmanship between the world’s two biggest economies will probably generate volatility for the next several months.

The NASDAQ has outperformed the other main indices in recent weeks because forward-looking investors are betting that large-cap tech stocks will be among the big winners in a post-COVID world.

Read This Story: When Lockdown Ends: The Brave New Economy

Many of these Silicon Valley stalwarts derive substantial revenue from China, which is why U.S.-China tensions disproportionately dampen their share prices.

As of this writing Wednesday morning, the three U.S. stock indices were trading deeply in the red as Federal Reserve Chair Jerome Powell provided a grim assessment of economic conditions. Global stocks were slumping as well.

Powell warned that the economy could face an “extended period” of weak growth and he called for greater fiscal stimulus, which is significant coming from a noted deficit hawk.

On top of geopolitical jitters, the pandemic continues to push global economies into recession.

The British government reported on Wednesday that the country’s gross domestic product fell 2% on a year-over-year basis in the first quarter and 5.8% in March alone. Britain must contend with both the pandemic and the uncertainties of Brexit.

Infectious disease expert Dr. Anthony Fauci warned the U.S. Senate yesterday that a premature easing of lockdowns could spawn a new wave of coronavirus outbreaks, which so far has killed about 82,000 Americans.

Policymakers face a stark choice between two objectionable alternatives. We can remain disciplined over social distancing and further devastate the economy, but crush the virus and reap lasting economic gains later. Or we can hastily ease restrictions now for short-term economic gains that plant the seeds for even worse disaster down the road.

Reports yesterday and today of new clusters of infections in China, South Korea and Germany are exacerbating investor fears. Epidemiologists have warned of the strong possibility of a second and even deadlier wave of COVID-19 in the autumn.

Government leaders are striving to enact remedies. Jerome Powell today reiterated the Fed’s willingness to do what it takes to shore up the economy.

Congress also has signaled that it isn’t finished with fiscal stimulus. The Democratic-controlled House unveiled a $3 trillion stimulus plan yesterday, although the proposed bill received a frosty reception in the Republican-controlled Senate.

Stimulus measures enacted so far by governments around the world have assisted economies and individuals during the pandemic (see chart). 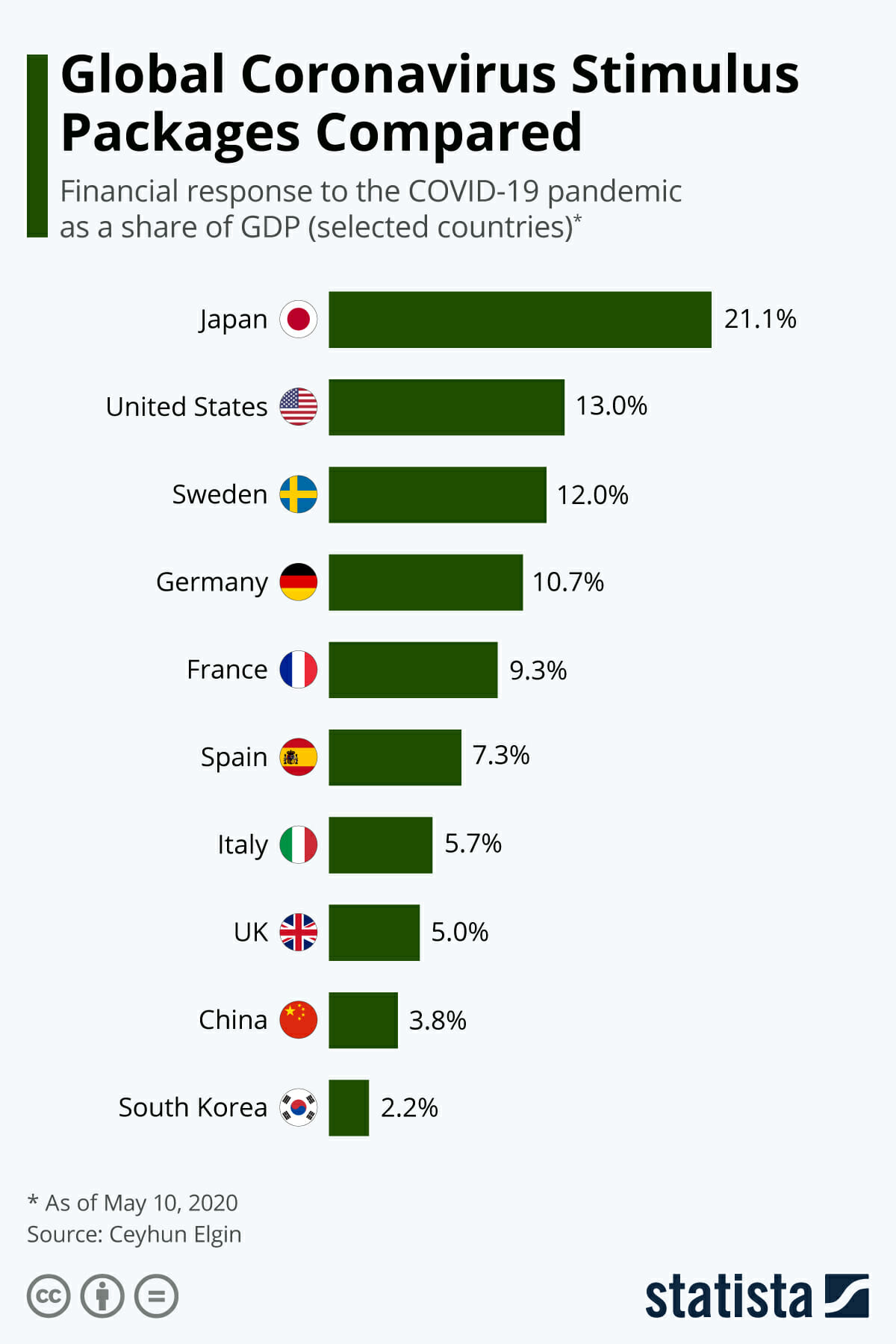 And yet, despite substantial fiscal and monetary stimulus, unemployment is soaring and thousands of companies teeter on the brink of bankruptcy.

The airline industry is particularly hard hit, with experts predicting that at least one major carrier will eventually go under. Small wonder that superinvestor Warren Buffett recently dumped his shares in the four major U.S. airlines, at a loss.

The fight for global dominance…

One way to cope with all of this chaos is to focus on investment mega-trends that enjoy powerful tailwinds. One such trend is the global implementation of fifth generation (5G) wireless technology. I’ve written a lot about 5G and for good reason.

Because of its robust download speed, 5G will serve as the backbone for the Internet of Things, which means companies involved in 5G’s roll-out should weather the severe recession better than most.

The momentum of 5G can’t be stopped and that spells opportunity for the shareholders of the chipmakers, telecoms, systems builders, and device makers that benefit from lightning quick connectivity.

5G is a focal point in U.S.-China rivalry. The U.S. development of 5G is occurring entirely within the private sector, whereas China’s state-run economy is devoting considerable government resources to the effort.

Beijing already has budgeted $400 billion towards development of 5G. The country that dominates 5G will obtain the edge in economic and military competitiveness. To learn our favorite 5G plays, click here now.

John Persinos is the editorial director of Investing Daily. You can reach him at mailbag@investingdaily.com