Will Grubhub Get Gobbled Up by Uber?

On March 9, I identified food delivery company Grubhub (NYSE: GRUB) as a potential coronavirus pandemic beneficiary. As I stated then: “Many diners are deciding it is safer to eat at home rather than go out. However, they still want food from their favorite restaurants.”

At that time, restaurants were still open. Mandatory stay-at-home orders were not issued in most states until a few weeks later. Once that happened, the demand for food delivery services took off.

By that time, the stock market was in free-fall. On March 23, the S&P 500 Index was down 35% from its record high just five weeks earlier. A lot of good stocks got pulled down with it, including GRUB.

Not for long. A severe stock market decline like this one creates a rare opportunity for industry consolidation. In some cases, buying a competitor (and its customer base) can be cheaper (and a lot faster) than growing a business organically.

Presumably, that must be what the executive team at Uber Technologies (NYSE: UBER) decided to do. On May 12, The Wall Street Journal reported that Uber has offered to buy Grubhub in an all-stock transaction.

According to the story, each GRUB shareholder would receive 2.15 shares of UBER. That day, UBER closed at $32.40 putting a per-share value of roughly $69 on GRUB.

Since the deal is not yet finalized, GRUB closed that day at $60.39. That is almost exactly double GRUB’s closing share price of $30.13 on March 23, and 20% above where it started the year.

That’s a great return in the near term but comes as little solace to longtime GRUB shareholders. In September 2018, GRUB peaked near $150, more than five times its initial public offering price three years earlier. 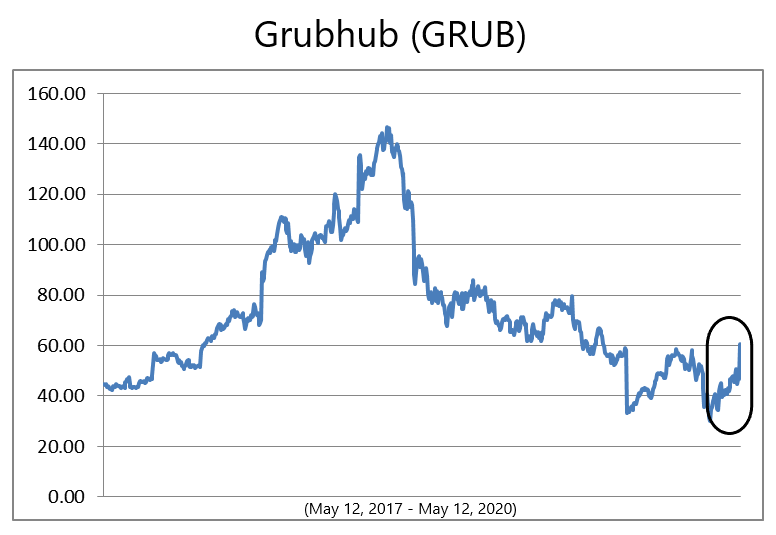 Given the circumstances, I believe Grubhub should accept such an offer if, in fact, one has made. In the on-demand delivery food fight, Grubhub has fallen far behind DoorDash (privately held) while Uber Eats is rapidly gaining ground.

DoorDash has the largest market share at 42%. Between the two of them, Uber Eats and Grubhub would control 48% of the market. And if DoorDash soon goes public as is rumored, it will have a lot more cash with which to compete.

Hence the need for Uber and Grubhub to make a deal now. For Uber, this is a chance to eliminate a competitor and double its market share in one blow. For Grubhub, this may be the last lifeline it gets before collapsing under the combined weight of its two larger rivals.

I doubt that government or industry regulators would have a problem approving this merger. A duopoly should be sufficient to ensure competitive forces keep delivery prices fair. Also, restaurants always have the option of employing their own delivery service.

For all those reasons, I expect Grubhub to negotiate with Uber in good faith. Of course, its management team should attempt to obtain the best terms possible for its shareholders. However, it should not walk away from the deal even if the terms remain as currently offered.

Apparently, this deal has been in the works since February. If so, it may soon have a resolution. At this point, it’s too late to get in on Grubhub.

If the deal falls through, GRUB could easily drop in half. If it goes through, you stand to make perhaps another 15% or so. The downside risk could be more than three times the upside potential.

However, it’s not too late to get in on what I believe will be a surge in mergers and acquisitions (M&A) activity later this year. Many industries are reeling and some companies won’t make it.

Earlier this week, Boeing (NYSE: BA) CEO Dave Calhoun speculated that at least one domestic airline will probably go out of business as a result of the coronavirus pandemic. The cruise ship industry could also lose one of its major players.

It isn’t just travel companies that are in deep trouble. Restaurants, automakers, and a number of other sectors have seen their sales plummet over the past two months. Some of them will simply shut their doors, while others will be merged into stronger competitors.

Attempting to predict which companies will end up being acquired is difficult. The fact that GRUB jumped 30% in a single day is proof that few people on Wall Street saw that deal coming.

Historically, the formula for identifying potential takeover targets works like this. Find an industry where three competitors control at least 80% of the market. Then, assume that the second and third largest players will pair up to overtake the leader.

It doesn’t always work out that way, but it will help you narrow down the field to a manageable list of candidates. At that point, you need to evaluate the specific circumstance surrounding each set of businesses to determine if a potential deal makes sense.

What you do with that list is up to you. Conservative investors may buy stock in both companies to improve the odds of success. To maximize the potential return, investors with a higher tolerance for risk might buy call options on one of the target stocks.

If you’re looking for options trading strategies suitable for risk-averse investors, turn to my colleague, Jim Fink. He’s one of the world’s foremost experts in options.

In his capacity as chief investment strategist of Options for Income, Jim Fink has devised a proprietary options trading strategy that racks up profits regardless of the pandemic or economic downturn.

Of course, Jim can’t guarantee you a “sure thing” on every trade he makes. Anyone who does that is just blowing smoke. But he can assure you that he has overwhelming statistical probability on his side.

The hard data don’t lie. Jim’s proven track record shows that he can deliver a successful outcome on 94% of his closed trades, as he has done over the past eight years. That includes a current winning streak whereby he has closed out 42 winners out of 42 recommendations.

Want to get in on Jim’s next winning trade? You’d better act now, because we’re only opening up membership for a few short days. Click here for details.