Why The Energy Status Quo Is Doomed

Time for a snap quiz. Which famous person uttered the following quote:

“I’d put my money on the sun and solar energy. What a source of power! I hope we don’t have to wait until oil and coal run out before we tackle that.”

It was…Thomas Edison in 1910. The genius inventor turned out to be prescient, as usual.

The ascent of renewable energy, long in the making, has reached an inflection point. The big winners in the post-pandemic world will be solar and wind power and other renewable sources of energy.

The energy sector’s status quo is dying. Below, I’ll examine the broader ramifications for the investment world. I’ll also steer you toward a trading system that generates profits regardless of these wrenching changes.

New government projections show that the U.S. is on track to produce more electricity this year from renewable power than from coal for the first time ever.

A decade ago, coal provided nearly half the nation’s electricity. Coal demand is mostly for electricity generation, but coal already is being destroyed by cleaner natural gas and will be further destroyed by cheap solar and wind. The oil and gas industry is undergoing upheaval as well.

When energy supermajor Royal Dutch Shell (NYSE: RDS.A, RDS.B) cut its dividend last month, for the first time since 1945, Chief Executive Officer Ben van Beurden made comments to the press that you should find sobering, even if you’re not directly invested in the energy sector:

“The world has fundamentally changed…[lifestyles will] be altered for some time to come, whether that is because of the economic bandwidth that people will have or businesses will have, or whether it is because of attitudes. We do not expect a recovery of oil prices or demand for our products in the medium term…

Will demand ever go back to where it was? That is hard to say. We live in a crisis of uncertainty at the moment; we don’t know what is on the other side.”

Oil prices have rebounded in recent days, as the re-opening of the economy feeds optimism. But don’t underestimate the radical changes that the pandemic is causing to the way consumers work, play and travel. A “new normal” is being born.

Read This Story: How to Survive the Economy’s Mass Extinctions

When the pandemic is over, daily life will be forever different. More people will rely on remote technologies and e-commerce, which means they’ll be burning less energy in office buildings and in vehicles. What’s more, renewable energies enjoy their own efficient infrastructures, decoupling them from oil and gas prices. Green technologies no longer require expensive oil prices to attract customers.

The fate of the energy sector is linked to the fate of the broader financial markets. Wall Street tends to view energy demand as an economic barometer and right now that barometer is flashing red. As the global recession deepens, the stock market probably faces further downside.

The slump in oil prices affects not only the giant oil firms and ancillary businesses (e.g., oilfield services and shippers), but it’s also triggering a profound shift in the geopolitical clout of major energy-producing nations, notably Saudi Arabia and Russia. As oil-generated government revenue dries up, these two authoritarian petro-states face existential threats.

The energy market experienced an historic crash in April but May has been kinder, with crude oil prices climbing higher. Take a look at the following chart, which depicts crude prices over the past 12 months (up to market close May 14), for the U.S. benchmark West Texas Intermediate (WTI) and the international benchmark Brent North Sea crude: 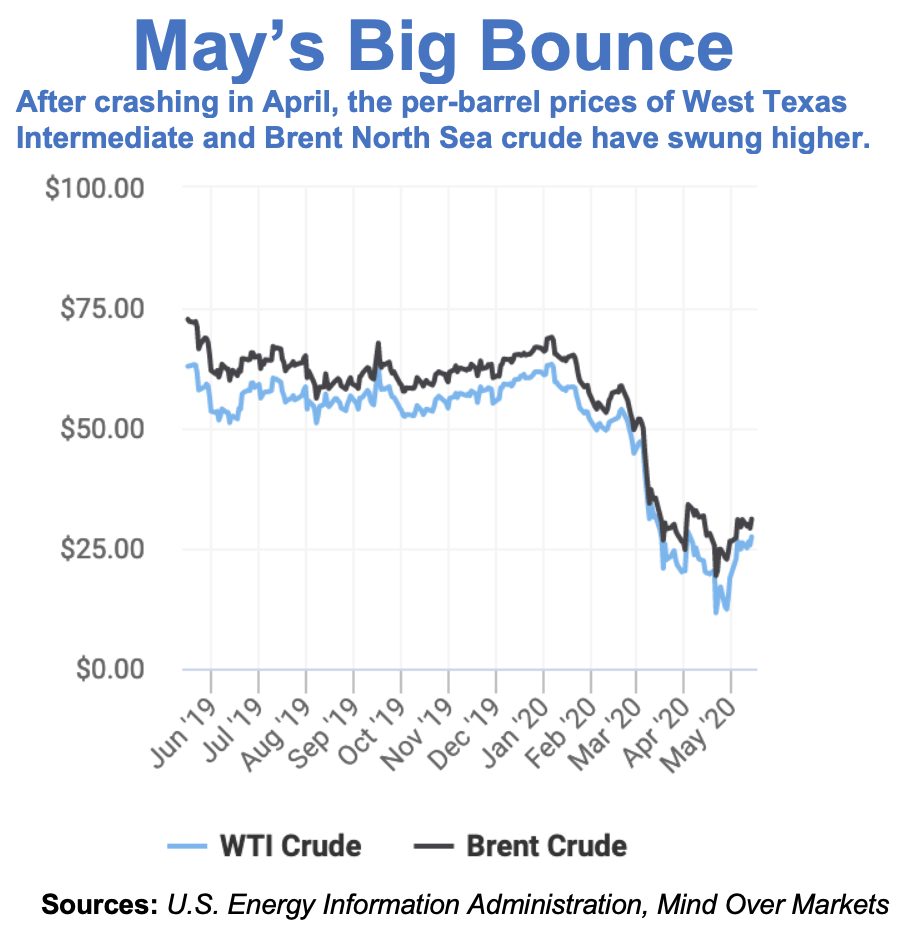 WTI currently hovers at $28 per barrel and Brent at $32/bbl. In late April the price of WTI fell to -$37/bbl. That’s not a typo. For the first time in history, oil prices fell below $0. A negative price implies that sellers are willing to pay buyers to take their stock of oil.

Oil has rebounded but the energy optimists are ignoring supply-and-demand imbalances that will continue to afflict energy and by extension the stock market.

First, there’s the possibility of a second wave of COVID-19 infections and deaths. Re-openings could turn out to be premature, hastening the spread of the disease. Secondly, OPEC+ members are likely to cheat on production cuts because they’re desperate for revenue.

The International Energy Agency (IEA) on Thursday released its Oil Market Report for May. The report asserted that OPEC and its oil-producing partners face depleted national treasuries, which could motivate them to under-comply with production cut agreements.

In the May report, the IEA projects that global oil demand will drop by 8.6 million barrels per day (m/bpd) in 2020, representing a huge demand destruction. For the second quarter alone, the IEA expects demand to plunge by 19.9 million m/bpd on a year-over-year basis.

Saudi Arabia and its key allies in the Gulf have been trying to jawbone oil prices higher over the past few days, verbally promising even deeper cuts than those mandated under the OPEC+ deal that went into effect May 1.

OPEC+ last month agreed to cut 9.7 m/bpd in May and June, or roughly 10% of global output. The deal is part of a coordinated effort by Saudi Arabia, Russia and the U.S. to stabilize oil prices and financial markets. But the deal has only made a small dent in the global glut of crude.

In the U.S., oil production continues to decline as drillers plug wells and slash spending. The banking industry is bracing for a deluge of bankruptcies in the U.S. shale patch.

All of this debt was accumulated before the onset of the severe recession caused by the pandemic.

Energy company valuations are evaporating. Year to date (as of market close May 14), the benchmark SPDR S&P Oil & Gas Exploration & Production ETF (XOP) has fallen by a whopping 48.8%, compared to a decline of 11.9% for the SPDR S&P 500 ETF Trust (SPY).

Throughout human history, it has taken a catastrophe to destroy the entrenched status quo. We are living in such a time.

So what’s a risk-averse investor to do? I suggest you consider a proprietary trading strategy that routinely racks up profits regardless of economic cycles or market gyrations. Investment risks are mounting but you don’t have to sit on the sidelines. There are still plenty of opportunities to make money.

Even the pandemic can’t derail this trading system, which has delivered a successful outcome on 94% of closed trades. We’re about to reveal the next winning trade and there’s still time to get on board. Click here for all the details.