What Can Past Pandemics Teach Investors?

The Hong Kong flu, which was first identified in July 1968 and peaked in December 1969, killed an estimated one million people around the world. It was eventually contained with a vaccine.

I’m old enough to remember the Hong Kong flu. I never got the illness, but several of my middle school friends did. Symptoms included fever, headache, shakes, sweats, and disorientation. (It was a certain era, so parents were known to ask their afflicted kids if they were “on anything.”)

What practical lessons can investors learn from pandemics of the past? Let’s start with the Hong Kong flu. The outbreak’s damage to equities was modest.

By 1968, economic growth and stocks had been rising, with only minor hiccups, for two decades. From the inception of the Hong Kong flu in mid-1968 to late 1969 when it started to wane, the Dow Jones Industrial Average lost about 13%. The Dow quickly recovered and would continue rising until the 1973-74 bear market, when stocks across the board got crushed for macroeconomic reasons.

But comparisons are imperfect. The damage to markets depends on the severity of the illness, as well as underlying economic and financial conditions.

The closest and most relevant example to the coronavirus outbreak is the severe acute respiratory syndrome (SARS) outbreak in China in the early 2000s. SARS caused an eventual 8,098 cases, resulting in 774 deaths reported in 17 countries. The one-year impact on China’s economy from SARS was -1.05%. The U.S. economy actually grew.

Stocks initially took a hit from SARS but quickly recovered. Take a look at the chart:

To be sure, the coronavirus pandemic is wreaking extensive human and economic pain. However, as with previous pandemics, COVID-19 will one day recede into distant memory.

The upshot: Stick to your long-term goals. Don’t get rattled and make impulsive decisions. Invoke emotional discipline and stay on track. Your older self will thank you. Now, let’s do the numbers.

As of this writing Monday morning, stocks are poised to open higher amid a general reopening of the economy. But last week, stocks erased most of the previous week’s gains, in the wake of dismal economic data. Renewed tensions between the U.S. and China didn’t help.

The S&P finished the week down more than 2%, the largest weekly decline since March (see chart). 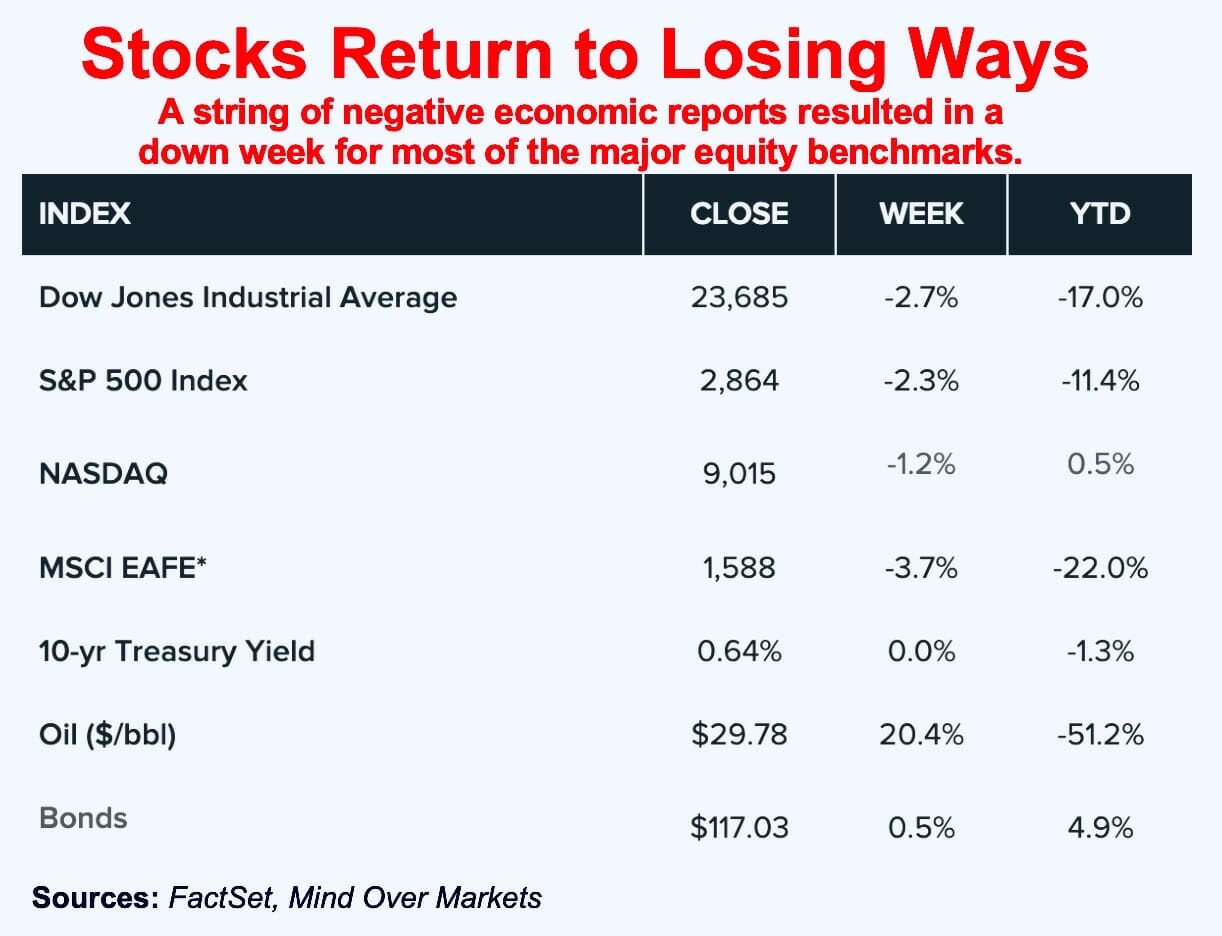 Stocks have enjoyed a healthy 27% rally from their March 23 low, but further sell-offs await unless a COVID-19 vaccine is quickly developed. And despite some of the happy talk you’ve been hearing, the development of a vaccine this year is extremely unlikely.

Meanwhile, as reflected in the decline of the PPI, the threat of deflation is stalking the economy. The silver lining is that the Federal Reserve will maintain loose monetary policies for as long as inflation remains under control. That said, after the pandemic ends, inflation will likely increase as the economy bounces back and the effects of massive fiscal and monetary stimulus kick in.

This year, the federal deficit is projected to reach $3.7 trillion and the nation’s total debt is on track to reach 107% of gross domestic product (GDP), the highest level of debt-to-GDP since World War II. The rest of the globe is saddled with massive debt as well.

I’ve highlighted daunting risks, but the world isn’t coming to an end. Plenty of opportunities still exist to make money.

Get defensive and reduce your risk. Increase your exposure to safe havens, such as gold.

I also suggest you consider a proprietary trading strategy that consistently generates profits regardless of economic or market conditions.

Even COVID-19 can’t stymie this trading system, which has handed investors a successful outcome on 94% of closed trades. We’re about to reveal the next winning trade. Click here to learn more.

In the meantime, stay calm, stay invested, and above all stay safe. Questions or comments? Drop me a line: mailbag@investingdaily.com