In the following video presentation, I look at where the economy has been and, more importantly, where it’s probably going. I amplify my remarks in the article below.

Despite the gloom pervading the global economy, U.S. stocks closed sharply higher on Monday. Fueling investor confidence were encouraging reports on a potential coronavirus vaccine, as well as hopes that the Federal Reserve will somehow keep the stock market afloat.

I contend that investors are in denial on both counts.

Even if a vaccine were possible, it would take several months and massive research and development costs to develop. “Magical thinking” is trying to conjure a fast cure.

In a 60 Minutes interview on Sunday, Federal Reserve Chair Jerome Powell offered encouraging words: “There’s a lot more we can do. We’ve done what we can as we go. But I will say that we’re not out of ammunition by a long shot.”

True, the Fed has provided considerable monetary stimulus. But the central bank can’t print corporate earnings, it can’t make a vaccine, and it can’t push wary consumers into stores, restaurants and airplanes.

Meanwhile, the economy remains in the worst shape since the soup kitchens and bread lines of the 1930s. In pre-market futures trading Tuesday morning, stocks were poised to open lower. Volatility continues amid coronavirus-induced uncertainty.

The World Economic Forum released a report on Tuesday that showed half of risk managers expected bankruptcies and industry consolidation in 2020, with a wave of mergers and acquisitions as strong companies gobbled up weakened players.

The U.S. economy is on track to post a massive loss from the coronavirus pandemic in the second quarter. We got a glimpse of the damage from first quarter data, which showed a 4.8% decline. But we’re due to take a bigger hit.

The median consensus estimate now calls for a whopping second-quarter contraction of 31.6%, the worst quarterly decline in growth since the end of World War II. In his Sunday television interview, Jerome Powell admitted that the economy might not recover until 2021.

In March and April, a decade of robust job growth was wiped out. The unemployment rate is expected to soar in coming months, with many full-time workers pushed into part-time jobs or not working at all

Supposedly “temporary” furloughs are showing signs of becoming permanent. In the post-COVID world, many of these jobs are likely to be replaced by robotics and automation. That’s why one of the biggest post-pandemic investment themes will be robotics/artificial intelligence.

The U.S. labor market will carry coronavirus scars, long after the pandemic has faded. Fed Chair Powell has called for additional fiscal stimulus, which appears stymied at this point. The U.S. House last Friday passed a $3.3 trillion stimulus package but the GOP-led Senate is balking. Republicans cite the ballooning federal deficit as the main reason for their reticence.

The U.S. Labor Department reported last week that more than 2.9 million Americans filed unemployment insurance during the week ending May 9, exceeding expectations of 2.7 million new claims. The new claims brought the total to 36.5 million over the past two months. The jobless numbers this week are expected to be bad as well.

The Labor Department reported last week that the U.S. Producer Price Index (PPI) declined 1.3% last month, the most since April 2009. In the 12 months through April, the PPI decreased 1.2%, the biggest drop since November 2015. The plunge in economic activity caused by the coronavirus is generating deflation, a corrosive phenomenon that afflicted world economies in the 1930s.

The economic carnage is global. European Union officials reported last week that industrial output in March in the euro zone (the 19 countries that share the euro as a common currency) was 11.3% lower than in February. That was the largest month-to-month decline since records began in 1991.

Energy demand destruction is clobbering major oil producers and threatens to destabilize regions such as the Middle East. It’s not just average Americans who are having trouble paying their bills. Petro-states, notably Saudi Arabia and Russia, are grappling with depleted national treasuries.

Make no mistake about it: we’re in a recession. On the docket this week are key reports that will provide further clues as to the severity and length of the recession. Take a look at the table. 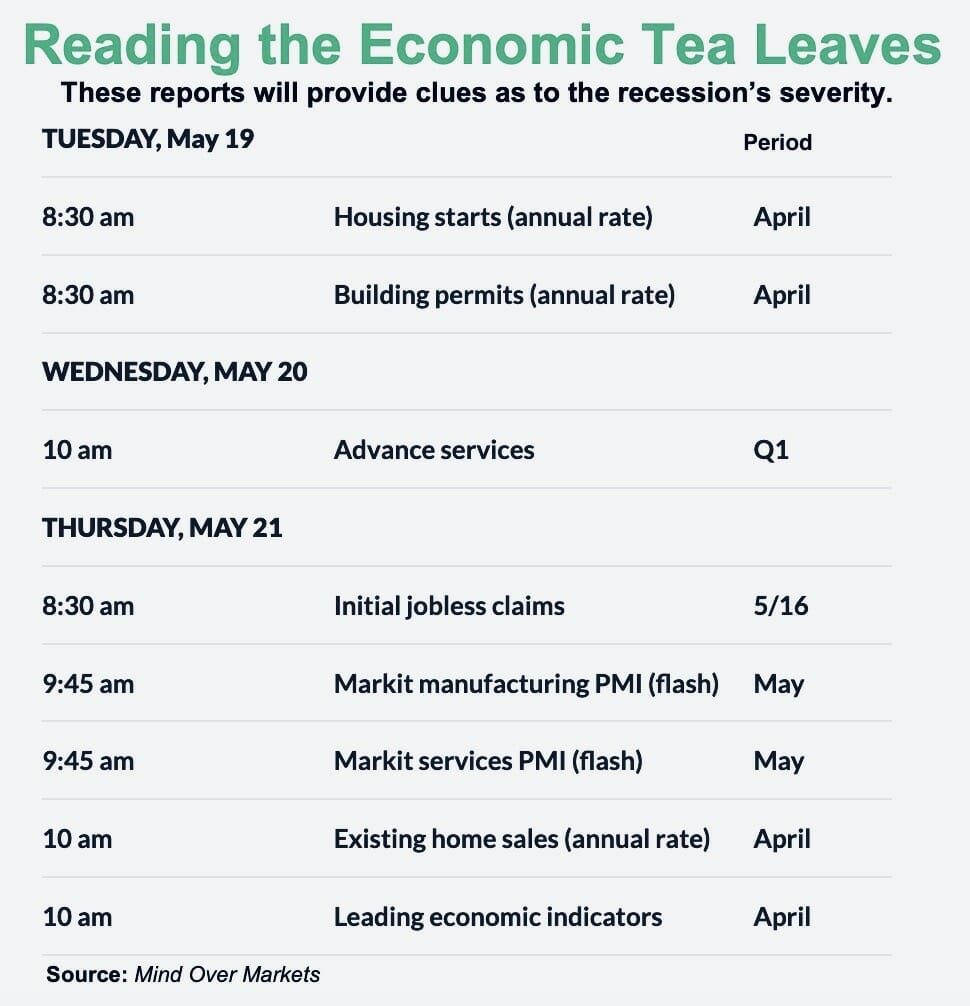 The key reports you should watch will get released Tuesday through Thursday.

Because of the general lockdown throughout the U.S., analysts predict that U.S. gross domestic product growth could fall by as much as 40%. Unemployment this summer could reach 30%.

As states start to incrementally open up their economies, will recovery be swift or agonizingly slow?

Market moving numbers are coming in the days ahead. Keep an especially close watch on Thursday’s jobless report. If it’s better than expected, stocks could soar. Regardless, it’s likely that the jobs data are understating the extent of unemployment.

In the meantime, elevate your portfolio’s cash levels and increase your exposure to safe havens, such as utilities, consumer staples, and gold.

Investors should consider junior gold miners. Those with a higher tolerance for risk are reaping tremendous profits from these operators. Small mining companies not only make prime takeover targets, but as a whole they’ve been strongly outperforming the broader market.

If you have any questions or comments, you can reach me at: mailbag@investingdaily.com. In the meantime…stay cautious, stay invested and stay safe.