Interest rates haven’t been this low since the Flintstones first bought a house. The current rate on a 30-year fixed mortgage is 3.56%; a 15-year fixed stands at an incredibly low 2.91%.

Under normal circumstances, historically low housing inventory and rock-bottom mortgage rates would set the stage for a robust homebuying season. But the coronavirus pandemic has changed all of that.

As you can imagine, COVID-19 is clobbering the housing sector. And that’s potentially bad news for the broader stock market.

During the global financial meltdown of 2008, investors around the world saw what could happen to the stock market if the domestic housing sector in the U.S. went under.

This year, the U.S. housing market is mired in a protracted downturn as a result of economic damage from the coronavirus pandemic. Massive unemployment is undercutting housing demand and could precipitate a crash in home prices. We’re witnessing the worst unemployment since the Great Depression, a context that’s hardly conducive for homebuying.

There is no direct link between the housing and broader stock markets, but major movements in either can influence the behavior of the other.

Instrumental in this equation is the American “wealth effect,” which refers to self-perceived affluence among consumers. About three-fourths of the U.S. economy is consumer spending, which greatly relies on sentiment. A pillar of consumer sentiment is the condition of the housing market, because for most Americans, the home is their biggest asset.

The Commerce Department reported Tuesday that U.S. homebuilding in April posted the worst plunge on record and permits for future residential construction also fell. The trend is the latest evidence that we’re facing the sharpest economic downturn since the 1930s.

Housing starts fell 30.2% to a seasonally adjusted annual rate of 891,000 units in April, the lowest level since early 2015. The percentage decline was the biggest since the government started tracking the series in 1959. Starts dropped 18.6% in March. The consensus forecast had called for housing starts to decline at a pace of 927,000 units in April. 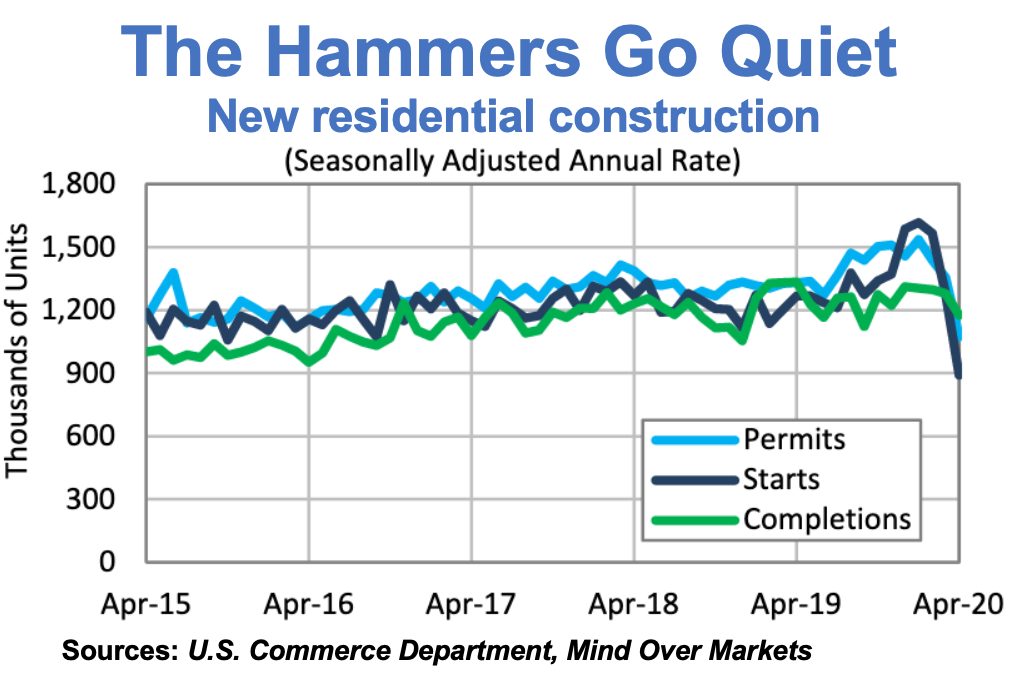 The housing market faces its next stress test as May rent and mortgages come due. We can expect to witness a wave of missed payments, with a ripple effect throughout the economy. Many analysts warn that the beleaguered housing market won’t fully recover for another two years.

Nor can low interest rates create corporate earnings out of thin air. For the first quarter of 2020, with about 90% of the companies in the S&P 500 reporting actual results, the blended earnings decline for the S&P 500 is -13.8%. Those numbers come courtesy of FactSet, the data provider for Investing Daily.

As I’ve continually counseled, investors during the coronavirus crisis should gravitate toward “essential services” plays, as epitomized by health care and utilities stocks.

For the second quarter of 2020, analysts are projecting an overall earnings decline of -20.0% and a revenue decline of -3.8%. Under such conditions, anyone betting on rapid recoveries in the economy and stock market are deluded.

In addition to the coronavirus pandemic, the renewal of trade tensions between the U.S. and China already is weighing on future corporate earnings and revenue.

The optimism you hear in press conferences and on cable news about a “V”-shaped economic recovery is baseless fantasy, designed to jawbone the stock market higher. So are hopes for an imminent coronavirus vaccine. Indeed, a Pentagon memo leaked on Wednesday revealed that top military analysts don’t see a vaccine coming until summer 2021.

The upshot: Stay cautious and focus on safe haven plays. Don’t panic but don’t succumb to false hopes, either.

Want advice on how to hedge your portfolio is these perilous conditions? Send me an email and I’ll answer your query: mailbag@investingdaily.com