Like most folks, I start my morning with a hot cup of coffee. Especially during the coronavirus lockdown, it’s reassuring to know that some of the best things in life are easy to come by.

In a moment, I’ll show you an unusual profit opportunity in the coffee sector. But first, let’s take a quick look at a few of the major players.

Selling coffee is a pretty simple business. You buy beans from growers, package them for retail, and send them through the distribution chain.

That’s how Starbucks (NSDQ: SBUX) became one of the great American growth stories. Over the past 10 years, its share price has returned more than 600% to its grateful shareholders. 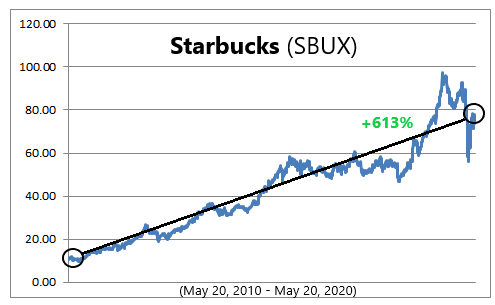 For that reason, Starbucks has inspired a host of imitators hoping to replicate its success. Despite its origin as a doughnut shop, Dunkin’ Brands (NSDQ: DNKN) has become one of the largest retail outlets for coffee sales in the United States.

An industry trade group estimates that 80% of the new retail coffee outlets opened in the U.S. during the past year belonged to either Starbucks or Dunkin’. Those two companies, along with privately held JAB Brands (e.g., Peet’s Coffee and Caribou Coffee), account for 78% of all coffee shops in America.

That figure does not include McDonald’s (NYSE: MCD), which sells over one billion cups of coffee annually worldwide. One place where McDonald’s is selling more coffee is in China, where tea has long been the brew of choice.

In fact, China remains the world’s leading producer and consumer of tea in the world. China probably will remain so for decades to come, but coffee consumption is on the upswing in the world’s second-largest economy and that creates opportunity.

The average American drinks 400 cups of coffee per year. China’s annual coffee consumption works out to only five cups per person. That leaves plenty of room for growth, especially for a Chinese company with local ownership.

In January 2018, a Chinese venture capital start-up named Luckin Coffee (NSDQ: LK) entered the fray. Six months later, the business was valued at $1 billion. Luckin went public in May 2019 at a share price of $17. On January 17, it traded above $51, three times its IPO price from a year earlier.

Two weeks later, Luckin was accused of accounting fraud by a short-selling firm named Muddy Waters. Muddy Waters said it received an anonymous tip from an informant who supplied video footage proving that Luckin was overstating its store sales.

Luckin vehemently denied the rumors. It is not unusual for short-sellers to fabricate falsehoods to drive a stock lower so they can cash out for a huge gain. Luckin asserted that sales were down due to the coronavirus pandemic as China shut down restaurants in most large cities.

All that changed on April 2 when Luckin announced that it had formed a special committee to investigate the allegations. At the same time, the company suspended its Chief Operating Officer and other staff that it acknowledged was complicit in the unauthorized activity.

The previous day, Luckin closed above $26. The following morning, it opened below $5. A few days later all trading in LK was halted pending the outcome of the investigation. Trading was resumed on May 20, at which time LK began trading at less than $3. That day, Luckin announced it was informed by Nasdaq that its American Depository Receipts (ADRs) will be delisted from trading on a U.S. stock exchange. 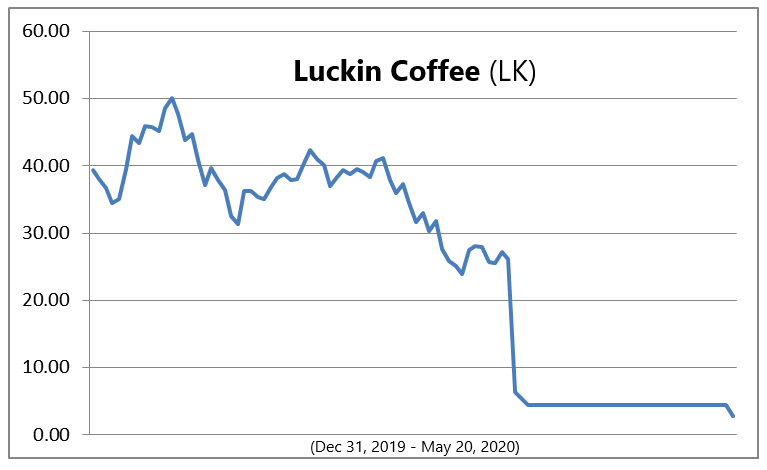 At this point, Luckin’s demise is all but assured. The only reason it still has value is the possibility that the company’s assets may be acquired by a competitor. In 1999, Starbucks opened its first retail outlet in China. Today, Starbucks controls 60% of the retail coffee market in China and is growing fast.

Starbucks wants to have 6,000 outlets in China by 2022. Six months ago, Luckin stated that it had 3,680 store locations. Starbucks could easily acquire Luckin without blowing up its balance sheet.

I don’t believe that will happen, but I think another party may want to acquire Luckin’s stores. Dunkin’ runs a distant second to Starbucks in China. To this day, the Dunkin’ brand has not gained traction with China’s trendy consumers.

Combining the two companies could create a formidable competitor to Starbucks. That may explain why call options for Luckin are trading vigorously. Earlier this week while LK was trading at $2.80, the call option expiring on September 18 at a strike price of $5 could be bought for 50 cents.

For that trade to be profitable, LK would have to double in value within the next four months. That seems unlikely barring some sort of merger or acquisition. By the time all the class-action lawsuits are settled, Luckin will be out of cash. But it will have leases on more than 3,000 stores to sell and somebody may want to buy them.

A safer way to profit…

Admittedly, there are a lot of what-ifs complicating this situation. Not the least of which is the opaque nature of how China regulates its stock market. For that reason, anything could happen.

A much safer way to profit in the options market is to follow the advice of my colleague, Jim Fink.

Jim Fink is the chief investment strategist for our premium trading service, Velocity Trader. Jim has developed a proprietary investing method that consistently beats Wall Street at its own game, in markets that are going up, down or sideways.

Jim’s 310F trade is the most accurate way I’ve ever seen to double your stake in just three days… 321 out of 324 trades paid out over the past three years.