Sigmund Freud coined a term for Wall Street’s attitude right now: denial. It’s a defense mechanism in which the truth is intellectually denied because it’s too painful to accept.

By my reckoning, the current rebound in stocks seems unwarranted, judging by dismal economic data and corporate earnings results. Bullishness is premature and actually serves as a contrarian indicator.

Below, I’ll steer you toward an industry that’s poised for outsized growth, regardless of the broader market’s shifting sentiment. But first, let’s survey the investment landscape.

Stocks closed sharply higher Wednesday, as all 50 states started reopening their economies and easing coronavirus lockdowns. The Dow Jones Industrial Average jumped 1.52%, the S&P 500 was up 1.67%, and the NASDAQ rose 2.08%.

As of this writing Thursday morning, all three indices were trading in the red. Stocks had opened higher but slipped as the day wore on, in the wake of weak unemployment data. The Labor Department reported today that another 2.4 million Americans filed for unemployment claims last week, bringing the number of unemployed to nearly 40 million.

Overall, stocks are well above their March lows. Oil prices also have been climbing, on indications of resurgent demand and a draw-down in U.S. crude inventories. At the same time, a spike in the shares of mega-cap tech stocks, due to better-than-expected earnings, has boosted the tech-heavy NASDAQ composite to within 5% of its all-time high.

Global equity benchmarks have been rallying as well, amid a falling number of COVID-19 cases and reopening national economies.

I’m an optimist by nature and I disdain the perpetual doom-and-gloomers, but I feel compelled to throw some cold water on these overheated hopes. It’s improbable for the stock market rally to sustain its momentum in the face of brutally bad economic data. A second wave of infections could send the market crashing again.

The worst in more than a century…

U.S. industrial production underwent a record plunge in April, as the coronavirus outbreak forced many factories to reduce operations or shut down completely to comply with state mandates.

According to new data published by the Federal Reserve, manufacturing output got especially hurt, falling by 13.7% over March, the sharpest decline in the 101-year history of the government’s industrial production gauge.

At 85.5% of its 2012 average, manufacturing output was at its lowest level since 1997. All major industries reported steep contractions. The production of motor vehicles and parts was the hardest hit with a 72% output reduction, as assembly plants throughout the U.S. ceased operations. Light vehicle production came in at an annual rate of 70,000, compared to an assembly rate of 11 million in February.

Other industries deeply affected include textiles, apparel and leather goods (at -21% and -24%, respectively); aerospace and misc. transportation (-225); and furniture (-21%).

As the following chart shows, the drop in manufacturing output is historic and exceeds even the darkest days of the Great Depression: 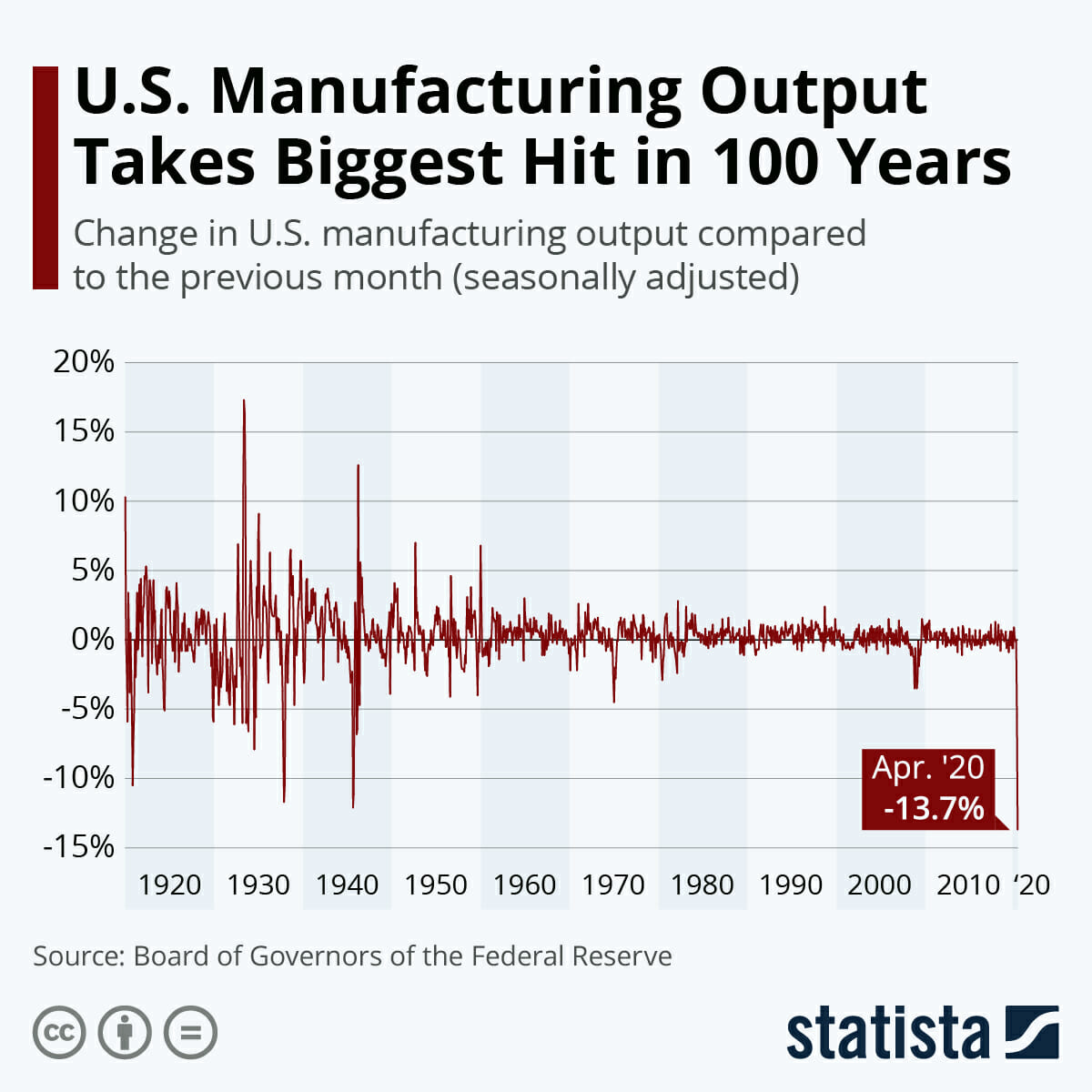 In addition, the U.S. housing market has been devastated, with many analysts saying it could take two years for housing to recover to pre-pandemic levels.

Economic reports will probably worsen in coming weeks, because of the expansion of “social distancing” precautions earlier in the year. However, Wall Street has put the past aside to focus on the reopening of the economy. The expected salutary effects of stimulus also have lifted bullish sentiment.

But there’s still a substantial gap between the fast “V”-shaped recovery that the bulls expect, and bleak economic and medical realities on the ground. Many companies have simply withdrawn earnings guidance because the conventional metrics no longer apply.

Restarting economies will be a messy process and no one can predict how the process will unfold. We’re in uncharted territory. Even when economies reopen, shell-shocked consumers will be reluctant to spend. Unemployment around the world has reached massive levels and household incomes have been decimated. Public and private debt has mushroomed, with a tsunami of bankruptcies on the way.

A pillar of the recent rally has been TINA (There Is No Alternative). But bullish sentiment may darken, as key numbers show the full extent of the coronavirus-caused economic damage.

It’s an investment truism: invest in products that people will always want, in good times or bad. And when it comes to providing a product that people crave the world over, marijuana passes the test.

Whether it’s for recreation or medicine, marijuana has been deemed an “essential service” by several states and localities, which exempts providers of the weed from business lockdowns.

As headwinds plague the global economy, the marijuana sector enjoys tailwinds. There are now 1,444 cannabis-related bills moving through state legislatures and Congress for 2020 sessions. The momentum for legalization is unstoppable.