Delisting: The New Front in the Trade War

As the global economy reels from the coronavirus pandemic, the last thing we need right now is a worsening trade war. But that’s what we’re getting.

First it was tariffs, then tech sanctions. Now a new front is opening: the financial.

With Memorial Day looming on the calendar, it occurs to me that America’s trade war with China is something akin to the trench warfare of World War I. The trade conflict drags on despite repeated truce attempts, with no end in sight. The pointless ruin affects all sides, with no apparent winner.

The legislation would require Chinese companies to undergo strict provisions to avoid getting delisted. For starters, they must reveal whether they are owned or controlled by a foreign government.

Secondly, the companies would have to comply with audits from the Public Company Accounting Oversight Board (PCAOB) for three years in a row. Currently, companies registered in China and Hong Kong are not subject to PCAOB audits. Over 170 Chinese companies are listed on the NASDAQ and NYSE, with a total market capitalization of $1.3 trillion. In terms of audit standards, all Chinese companies listed in the U.S. are non-compliant.

In response, China is expediting applications by Chinese companies to list their shares in London through the London-Shanghai Stock Connect system. The tit-for-tat cycle has begun.

Chinese companies like listing on the U.S. exchanges because it confers a larger market for their shares. U.S. investors like it because they get easier access to Chinese stocks. The following chart shows the huge degree to which Chinese companies have accessed U.S. capital markets. 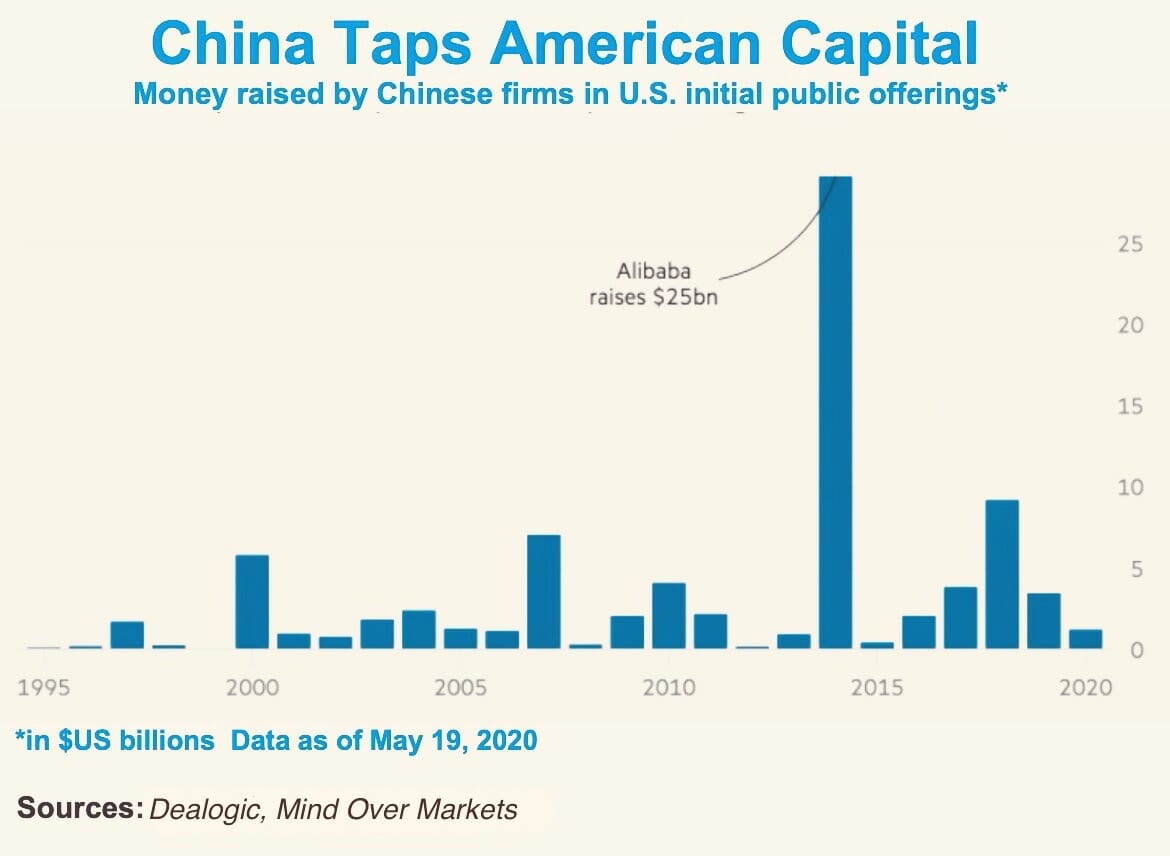 The recent Luckin’ Coffee accounting scandal is a prime example of how investors can get hurt by the financial sleight-of-hand of Chinese companies.

Luckin’ Coffee shares have been halted from trading on the NASDAQ after reports surfaced that management was cooking the books.

The delisting legislation now awaits a House vote. Republicans and Democrats alike are eager to pick a fight with China for the country’s perceived shortcomings in handling the coronavirus outbreak, so the bill stands a good chance of becoming law.

Huawei in the crosshairs…

Washington last week imposed new sanctions on China-based tech giant Huawei, making it harder for foreign firms to sell to Huawei if any of their components have U.S. technological components mixed in. Huawei is a major player in the race to implement ultra-fast 5G wireless technology.

These latest U.S. measures against China underscore how the overall trade war won’t end anytime soon. Investors had grown complacent about the trade war, assuming it was over. On the contrary, most tariffs remain in place.

Stocks swooned Thursday, with the Dow Jones Industrial Average closing down by more than 100 points, as investors fretted about the pandemic and trade war. U.S.-listed Chinese stocks fell especially hard. As of this writing on Friday, all three major U.S. stock indices were trading deeply in the red.

Another investor concern is whether governments are reopening their economies too soon. Health experts warn that the easing of lockdowns could spawn a fresh wave of coronavirus cases and concomitant economic damage.

Read This Story: Video Update: The Economic Road From Here

It’s likely that a significant proportion of consumers, once released from quarantine, won’t be eager to run out and start spending again. Many layoffs are supposed to be temporary, but there’s a good chance they’ll turn out to be permanent.

At the opening of the National People’s Congress on Friday, the Chinese government announced that it would abandon its practice of setting an annual target for economic growth, citing the uncertainties of the pandemic.

The central government pledged a stimulus package to revive growth. Beijing also unveiled harsh new security laws against Hong Kong that already are raising the ire of the White House.

With a tough reelection fight on its hands, the incumbent U.S. administration has concluded that confronting China is a political winner. By the same token, Chinese leaders can’t afford to appear weak to their public.

I’ve consistently warned readers that the Sino-American trade war wouldn’t cease until after the U.S. presidential election in 2020. In fact, it might never end, regardless of who wins the presidency in the fall. The latest flare-ups underscore the long-term competition between the world’s two largest economies, as they jockey for global hegemony.

During the great financial crisis of 2008-2009, enormous cross-border cooperation was deployed to rescue world capitalism from collapse. Today, due to the rise of nationalism, international relationships are frayed, even between America and traditional allies. The coronavirus pandemic combined with rising U.S.-China antipathy equals extreme danger for investors.

Editor’s Note: I’ve tried to shed some honest and objective light on the long-running trade war. A key battlefield in the escalating Sino-American rivalry is 5G, the fifth generation of wireless technology that will revolutionize our daily lives.

With 5G, trillions of dollars and the control of the future are at stake. By providing lightning-fast download speeds, 5G will function as the infrastructure for a wave of technological innovation.

Our investment team has pinpointed one small company that’s critical to the success of the 5G rollout, but it’s flying under Wall Street’s radar. The stock of this company is ready to soar, but you need to act now, before the rest of the herd finds out and drives up its share price. Click here for details.