How the Media Mislead You About the Market

A long-time pet peeve of mine is hear the news media trumpet headlines that say the “Dow jumps 400 points” or “the Dow drops 500 points” when they report about stocks.

This annoys me not because the news is untrue, but because it is sensationalistic and misleading.

Ultimately, the news media is a business. News companies don’t see their mission as educating the public. They want as many views and clicks as possible, so they will present the information in a way that they think will most likely capture audience attention.

Secondly, although the Dow is indeed a major stock index, I know of no one in the finance industry who uses it as a benchmark. When finance professionals refer to “the market,” they usually mean the S&P 500. But on the news, it’s usually “Dow this” and “Dow that;” the S&P 500 plays second fiddle in the reporting.

The news media’s emphasis on the Dow has left an impact on the masses. When my friends who don’t know much about stocks try to talk to me about the market, they always bring up the Dow instead of the S&P 500.

Why Not Use the Dow?

Quite simply, the Dow is not a good representation of the stock market.

The Dow Jones Industrial Average was formed in 1896 with 12 original index constituents. Today, the index has 30 large-cap stocks, but they represent only about a quarter of the total U.S. stock market. Mega-cap stocks like Amazon (NSDQ: AMZN) and Facebook (NSDQ: FB) aren’t even part of the index, and Apple (NSDQ: AAPL) only joined several years ago.

On the other hand, the S&P 500 currently has 505 large-cap stocks, including all 30 that are in the Dow. Together, the S&P 500 constituents represent about 80% of the U.S. stock market. Most investor money is invested in these large-cap companies. Of course, even this index doesn’t cover the whole market, because mid-cap and small-cap stocks aren’t represented.

For an even more comprehensive U.S. stock index, there’s the Russell 3000, which tracks the 3,000 largest publicly traded U.S. companies and represents close to 100% of all U.S. stocks. However, the S&P 500 works well enough and it’s commonly treated as proxy for the U.S. market.

Another reason why the Dow isn’t a great benchmark is that it’s a price-weighted index. This means that a stock’s weight in the index depends on its per-share price. A $50 stock will have five times as large an impact on the index as a $10 stock even if the company whose stock is $10 is in fact the larger company. This presents a skewed view of the overall market.

Since a company’s market cap—and not its price—represents its size, a capitalization-weighted index is a better reflection of the overall market. Thus, despite the media’s frequent references to the Dow, finance professionals commonly use the S&P as benchmark.

As you can see in the chart, while the S&P 500 and Dow Jones Industrial Average usually move in the same direction each day, over time their returns can be quite different. Going into the Memorial Day weekend, the Dow is down about 14% for the year while the broader S&P 500 is down about 8%. 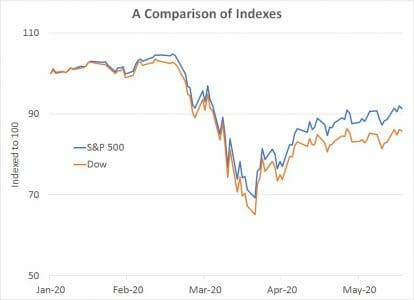 So the next time you hear the media yapping about the Dow, tune the noise out and check out how the S&P 500 is doing.

Editor’s Note: Our colleague Scott Chan just provided you with invaluable investing insights. If you’re looking for a mega-trend investment that’s immune to cyclical ups and downs, turn to the booming marijuana sector.