The Good (and Bad) News About the Markets

In recent weeks, we’ve evolved from unmitigated bad news to a mixed-bag scenario. That’s progress, but serious risks remain. Here’s a look at the reasons for optimism, as well as those for caution.

Most of Europe and all fifty U.S. states are in various stages of reopening. The three main U.S. stock market indices closed in the green Wednesday, on confidence that the worst days of the pandemic are behind us.

The Dow Jones Industrial average yesterday gained 2.21%, the S&P 500 rose 1.48%, and the NASDAQ edged up 0.77%. The S&P closed above 3,000 for the first time since March and above its 200-day moving average for the first time since late February. As of this writing Thursday morning, the three U.S. indices were mixed and struggling to gain traction in choppy trading.

Nearly 100% of S&P 500 companies have reported first-quarter earnings results. According to research firm FactSet (the data provider for Investing Daily), the blended earnings decline for the S&P 500 in the quarter is -14.6%.

With the extreme uncertainties posed by the coronavirus pandemic, the conventional financial metrics used to project earnings performance have been thrown into a cocked hat. FactSet reports that more than one in three S&P 500 companies have withdrawn earnings guidance for 2020.

The industrials, consumer discretionary, and health care sectors had the highest number of companies withdrawing earnings guidance for the year. The utilities sector, typically resilient during tough times, was home to the most companies still willing to provide guidance.

And yet, despite this abysmal earnings performance, U.S. stocks have rallied since their lows in March. European and other overseas equity benchmarks have been rallying as well, amid a falling number of COVID-19 cases and reopening national economies.

The European Union announced on Wednesday a new stimulus package worth €750 billion ($823 billion), providing a substantial tailwind for businesses and investors on the Continent (see chart). 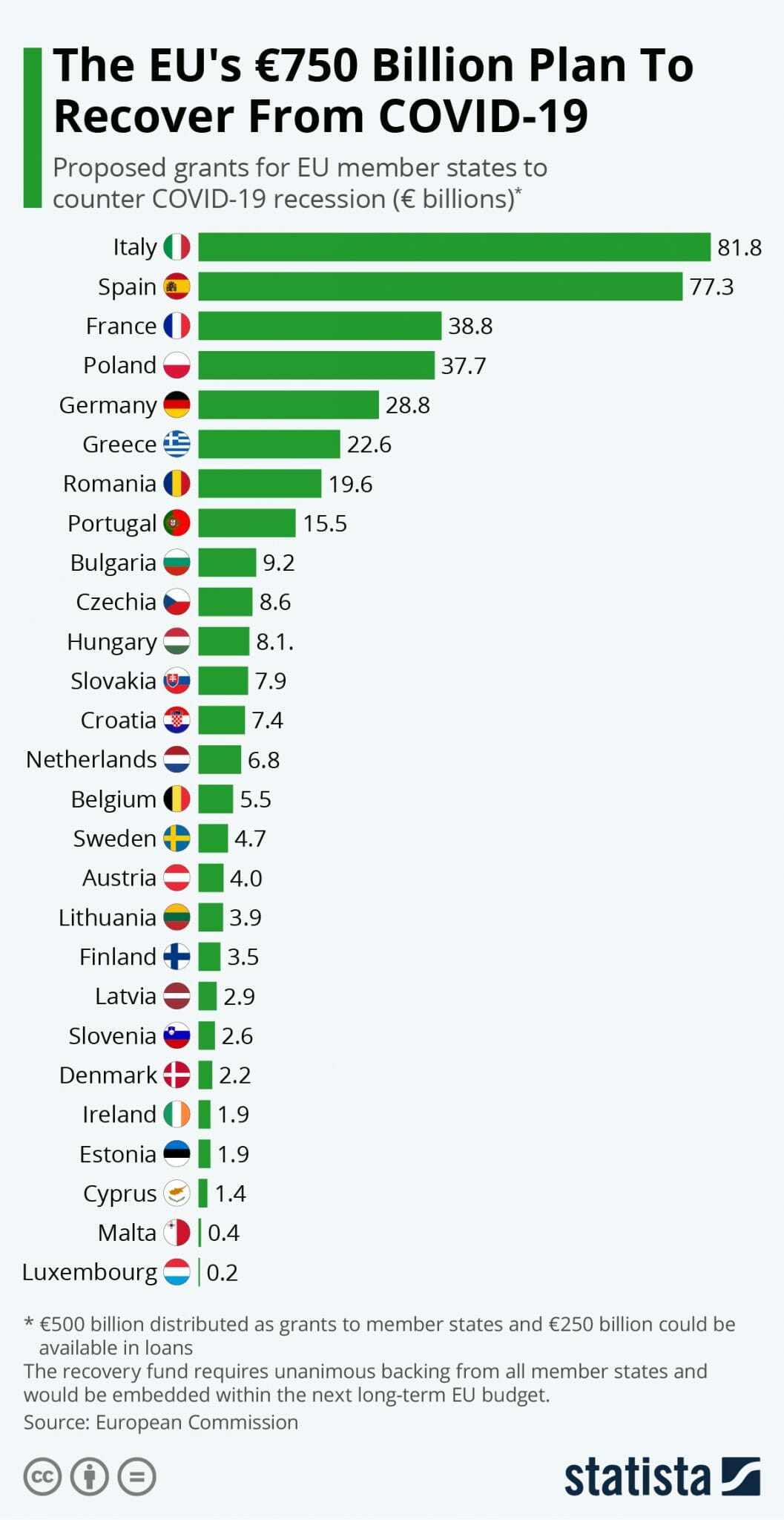 Why the disconnect between the economy and markets? Because Wall Street is peering through the windshield, not the rear view mirror. The stock market is forward looking whereas incoming economic data is mostly backward-looking.

Watch This Video: The Economic Road From Here

Stocks are being driven higher by optimistic expectations for the second half of the year and into 2021.

It’s true that states are reopening economies and many businesses are experiencing reviving demand. Stimulus initiatives from Congress and the Federal Reserve are another big plus. However, in my view, stocks have risen too far, too fast. They remain overvalued and vulnerable for a tumble.

Setbacks in the fight against the coronavirus could trigger a correction (or worse). Indeed, health experts warn that the rapid and chaotic openings of U.S. states will probably lead to thousands of additional deaths that could have been prevented.

At the same time, real human beings are facing real need. Nearly half of all U.S. households report that they’ve lost employment income since mid-March, but the extra jobless benefits enacted by Congress are only now starting to trickle out. Those benefits are set to expire on July 31 and lawmakers in Washington are deadlocked on whether to extend them.

It’s impossible for me to be bullish when 38 million people in the U.S. are unemployed. It’s also worth noting that America has reached the grim milestone of more than 100,000 coronavirus deaths, with no peak in sight.

Some analysts make the argument that this recession is self-induced and therefore likely to experience a faster than usual recovery. However, that ignores the fact that the global economy already was slipping into a cyclical downturn before the pandemic struck.

In March, all three major U.S. stock indices plunged into bear territory in record time. Looking at the last four bear markets, the average time from the market peaks of 1980, 1987, 2000, and 2007 until stocks climbed back to that previous high was 49 months.

In the good news/bad news scenario I’ve just described, stay invested but stay cautious. If you’re inclined to put money into sectors that are poised to perform relatively well in the post-COVID world (e.g., essential services plays such as utilities and consumer staples), start dipping your toe in the water.

For new purchases, use stop loss orders. Using this order, the trader will pre-set the value based on the maximum loss the investor is willing to tolerate. If the last price drops below this fixed value, the stop loss automatically becomes a market order and gets triggered. As soon as the price falls below the stop level, the position is closed at the current market price, which prevents any additional losses.

You also should consider a proprietary options trading system devised by one of my colleagues. This system has a proven track record of making outsized profits in bull or bear markets, in expansions or recessions.