Every year around this time, my wife Carole and I visit Palm Springs, California to bask in the desert sunshine.

Last night, Carole told me that plane tickets from BWI (our closest airport) to Palm Springs were ridiculously cheap and asked if she should book a trip for June, when pandemic lockdowns are presumably looser. My response: “Let’s wait and see how the pandemic plays out.”

Multiply my decision to defer a major purchase by similar decisions made by several million other consumers and you get an idea of the challenges impeding any economic “recovery.”

Consumer confidence has been traumatized by the coronavirus. Even as economies reopen, many people will remain reluctant to start mingling in bars, restaurants, sports stadiums, theme parks, and shopping malls. They’ll be especially reluctant to step into the crowded fuselage of an airplane.

To my mind, this dynamic explains an anomaly during the current stock market recovery. Typically during rebounds from bear markets, cyclicals lead the market higher. That’s not the case with this recovery in equities, which isn’t demonstrating cyclical leadership. It seems that even the bulls have their doubts about the economy’s future and they’re pricing in a long, slow recovery (see chart). 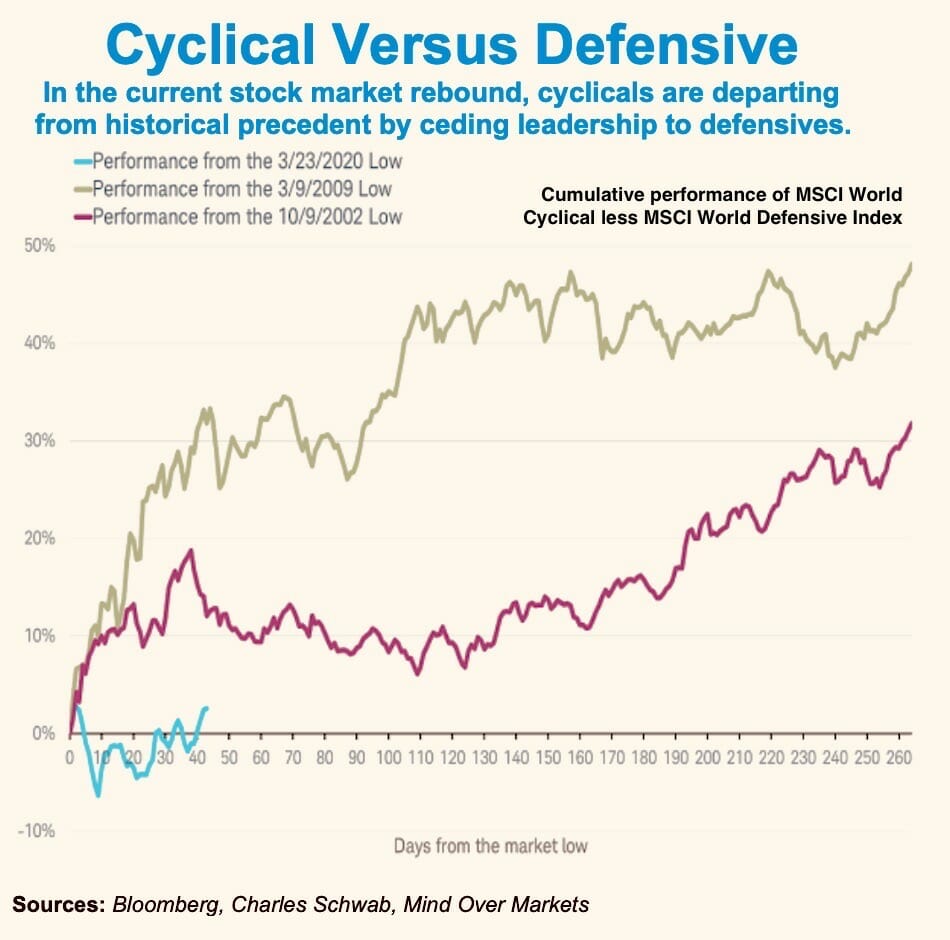 Cyclical stocks are susceptible to economic growth projections, such as consumer demand. Defensive stocks are less responsive to cyclical indicators, especially if they’re in the category of essential services.

Exemplifying essential services plays are utility stocks. Even during a recession, people still need electricity and paying the utility bill is a top priority. The same applies to health care and consumer staples. Regardless of economic conditions, we still need medical care, toilet paper and toothpaste.

During the rebounds following the global recessions ending in 2002 and 2009, cyclicals significantly outperformed defensives. However, since the market’s coronavirus lows in March, defensives have led the rebound.

According to a recent study by Goldman Sachs (NYSE: GS), bear markets caused by adverse events have ended faster, with recoveries that were quicker than those caused by cyclical movements or structural problems.

That’s encouraging context, but it ignores the fact that the global economy was sputtering before the pandemic even arrived, which is another reason that could explain the underperformance of cyclicals in this stock market recovery.

By my reckoning, this atypical market leadership is ominous. It could suggest that 1) we haven’t seen the stock market low yet; 2) the economic recovery will turn out to be weak; or 3) both scenarios.

Markets could plunge to new lows in expectation of a deeper recession. A second wave of coronavirus cases could prompt a return to social distancing and business lockdowns, exacerbating the recession and spooking investors.

The Commerce Department reported Thursday that U.S. gross domestic product (GDP) shrank 5% in the first quarter of 2020, the worst contraction since the 2008 recession and exceeding expectations of a 4.8% drop in GDP.

The Sino-American trade war, which has flared up at the worst moment, is another wild card.

The main U.S. stock market indices were rising Thursday but in the late afternoon reversed direction and closed sharply down on renewed tensions between the world’s two largest economies. The indices opened in the red on Friday, as the U.S. and China confronted each other over China’s harsh new security laws for Hong Kong.

New and bleak economic data also weigh on stocks. The Commerce Department reported Friday that consumer spending in the U.S. fell by a record 13.6% in April. Economists had expected a 13% decrease. With 38 million Americans unemployed and consumers tightening their purse strings, the economic downturn could get even worse. The trough in late March might not signify the market low, after all.

As all 50 states reopen to various degrees, economic activity is likely to pick up. However, the rate of improvement might not be enough to propel cyclical stocks to outperform. Without the leadership of economically sensitive cyclical stocks, the message would be that analysts don’t expect a healthy and sustainable recovery.

New economic cycles typically usher in new market leadership, with leaders and laggards switching places. Until that happens, all bets are off.

The stock market and the economy don’t move in lockstep, of course. They influence each other, but the markets are forward looking and they’re driven by emotions that are often irrational. Hopes for a rapid recovery seem irrational to me. Eventually, stocks will come around to reflect economic reality and that could be trouble.

Read This Story: Economy Down, Stocks Up: Why The Disconnect?

Corporate earnings projections don’t offer much solace. According to research firm FactSet, analysts predict a year-over-year decline in earnings in the second quarter (-42.9%), third quarter (-24.8%), and fourth quarter (-12.4%) of 2020.

We’re probably witnessing a “melt-up,” a bout of frenzied speculation that signals the end stage of an asset bubble. A melt-up is typically followed by a meltdown. The bulls are disregarding the disconnect between horrible economic conditions and high valuations.

My wife and I canceled our annual vacation this year. Into the foreseeable future, you won’t find me getting on an airplane to go anywhere, much less Palm Springs. And that’s the consumer pullback, in microcosm. Welcome to the new normal.