Video Update: The Calculus of COVID-19

The official song for Franklin Delano Roosevelt’s successful 1932 presidential campaign was “Happy Days Are Here Again,” as FDR sought to reassure a nation mired in the despair of the Great Depression. As a kid, I’d sometimes hear my grandparents nostalgically hum the tune.

The stock market is recovering, but I’m not quite ready to sing that song. I explain why in the following video.

Yes, the coronavirus appears to be waning and growth prospects look decent for 2021. However, U.S. gross domestic product (GDP) is projected to plunge 40% on an annualized basis in the second quarter and more than 40 million Americans are unemployed.

Below, I’ll calculate the positives and negatives and provide balanced advice. You should have confidence in the future, but without wishful thinking.

May is now officially behind us. History will note that it was the month when the U.S. and global economies began to reopen during the pandemic. Stocks closed last week higher, as a consistent drop in new infections from the coronavirus outbreak gave investors hope. European stocks showed particular momentum, in the wake of the European Union’s proposed €750 billion stimulus fund.

Economic data continue to look grim for 2020 but projections are considerably brighter for 2021. The International Monetary Fund forecasts global GDP growth of 5.8% in 2021, but that’s contingent on the efficacy of government policy efforts and the biological course of the disease.

Stock markets are forward looking, so markets have continued to rally as investors increasingly focus on stimulus efforts and peaking infection rates. 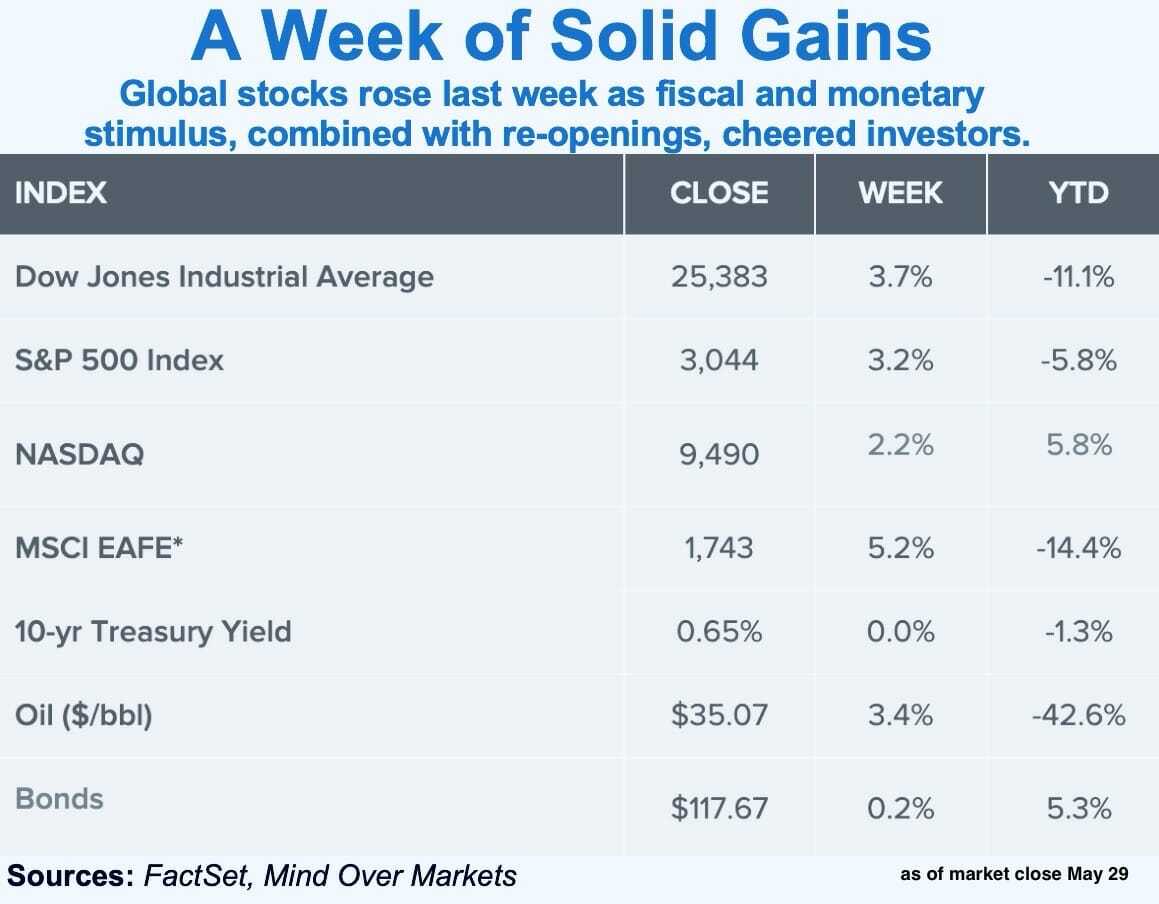 Letters of the alphabet…

The U.S. economy will eventually recover but the debate is whether it will be a sharp bounce back (V-shaped); back-to-back rises and declines in economic activity (W-shaped); a prolonged decline followed by a slow rebound to baseline activity (U-shaped); or an economy that doesn’t completely regain its upward trajectory after the downturn and remains stagnant (L-shaped).

The nightmare scenario would be an unshackling of the economy that is followed by another lockdown due to a resurgence of the coronavirus. My sense is that a V-shaped recovery isn’t in the cards, due to the severe headwinds we face, but there are too many unknowns to pinpoint the exact nature of the recovery. Much depends on policymakers.

This fiscal stimulus has been accompanied by robust monetary initiatives from central bankers around the world. The U.S. Federal Reserve has slashed interest rates to near zero and pledged to buy bonds in nearly all segments of the credit market, including government and mortgage securities and corporate and municipal bonds.

Fed Chair Jerome Powell has consistently signaled the Fed’s willingness to do what it takes to keep the economy and stock market afloat. The Fed’s purchases of bonds have expanded its balance sheet from roughly $4 trillion before the pandemic to $7.1 trillion.

Never bet against the consumer…

Much also depends on consumers. Without confident consumers who have money in their pockets, there won’t be a recovery. Therein lays some hopeful news. The number of weekly jobless claims has slowed from 6.8 million in late March to 2.1 million new claims last week.

Since the end of World War II, any investor who bet against the desire of Americans to go shopping during a recovery ultimately lost the wager. Hence the time-proven adage on Wall Street: Don’t bet against the consumer.

In the U.S., consumer spending accounts for about 70% of GDP, providing the growth engine that has pulled the country’s economy out of most downturns for the past seven decades.

So you think baseball, or maybe football, is the national pastime? Nope. It’s shopping. And America’s love affair with shopping will certainly outlast this crisis. The retail sector will emerge from the pandemic in reconfigured but even stronger shape, with the e-commerce innovators in the vanguard.

Keep an eye on these key economic reports scheduled for release this week: the ISM manufacturing Purchasing Managers’ Index (PMI) on Monday; motor vehicle sales on Tuesday; the services PMI on Wednesday; initial jobless claims on Thursday; and the May jobs report (unemployment rate) on Friday.

How to position your portfolio…

Maintain portfolio diversification, not only to different asset classes but also to geographic regions and sectors.

One region that’s been battered but likely to outpace the globe is Latin America. As the world moves beyond the pandemic next year, the region’s increasingly affluent middle class will probably strive to satisfy pent up demand.

Read This Story: The Recovery Will Dance to a Fast Latin Beat

The ascendancy of consumerism is a global phenomenon. In the developing world, disposable incomes are rising in tandem with consumer sophistication. Emerging markets also have populations that are younger, and hence freer spending, than those in developed countries.

Generally, you should emphasize safe havens, such as gold, and essential services such as consumer staples and dividend-paying utility stocks. Keep plenty of cash on hand for the bargains to come. Happy days aren’t here again yet, but they soon will be.