It took a half century for psychedelic drugs to move from elliptical allusions in the pop songs of my youth (Day Tripper, White Rabbit, Purple Haze, Lucy in the Sky With Diamonds…the list is endless) to mainstream medical research. But the transformation is finally happening.

And psychedelics are going corporate, too. For investors who seek the “next big thing,” these developments are exciting news.

Let’s turn our attention away from rock music to neuropsychopharmacology.

Neuropsychopharmacology is a fancy word for the study of the neural mechanisms that drugs act upon to influence behavior. One of the hottest areas of research in this field is psilocybin fungi, aka magic mushrooms or “shrooms.” This research is paving the way for the creation of a huge and profitable industry.

But magic mushrooms aren’t just for getting stoned and staring at lava lamps. Empirical research shows they can help ease physical pain, depression, anxiety, chronic headaches, and a host of other ailments. Magic mushrooms are destined to play key roles in the future of therapy, in medicine and psychiatry.

The latest case in point: In the June 2020 issue of Neuropsychopharmacology, the most influential publication in the field, scientists released a first-of-its-kind study that shows how magic mushrooms “dissolve the ego” (using layman’s language) in a benign way that opens the door to treating psychological disorders.

The authors of the magic mushroom study wrote:

“Implications of these findings also extend far beyond understanding the neurobiology of the acute psychedelic experience and drug-induced ego dissolution. There is growing evidence that psychedelics can provide therapeutic relief for individuals suffering from increasingly common and difficult to treat disorders such as depression, anxiety, addiction, and post-traumatic stress disorders. Thus understanding the mechanisms by which psychedelics provide symptomatic relief may identify novel therapeutic targets. Interestingly, the degree of ego dissolution has been found to correlate with long-term clinical outcomes and increases in well-being.”

The U.S. Department of Justice lists psilocybin as a Schedule I controlled substance. “Scheduling” is a system by which the U.S. Drug Enforcement Agency decides which substances are dangerous and which substances are medically useful. The Controlled Substances Act, the legislation surrounding the scheduling system, was created in 1970.

Official federal policy (erroneously) states that psychedelic fungi have no medicinal properties and are prone to abuse. Accordingly, it’s illegal to cultivate or possess psilocybin producing mushrooms for either personal consumption or distribution. The prohibition is a legacy of the War on Drugs launched by the Nixon administration.

Magic mushrooms are currently legal in Brazil, Bulgaria, Jamaica, the Netherlands, and Samoa. Many other countries have decriminalized the possession and cultivation of mushrooms.

In the U.S., magic mushrooms remain illegal in all 50 states. However, the cities of Denver, Colorado, and Oakland and Santa Cruz in California, have passed laws to decriminalize magic mushrooms, paving the way for medical research into their benefits.

A magic mushroom industry is beginning to take shape. It helps that recent research by the respected medical journal The Lancet shows mushrooms to be a relatively benign recreational drug. You’ll notice that good old fashioned alcohol leads the pack as the most dangerous, ahead of heroin and crack cocaine (see chart). 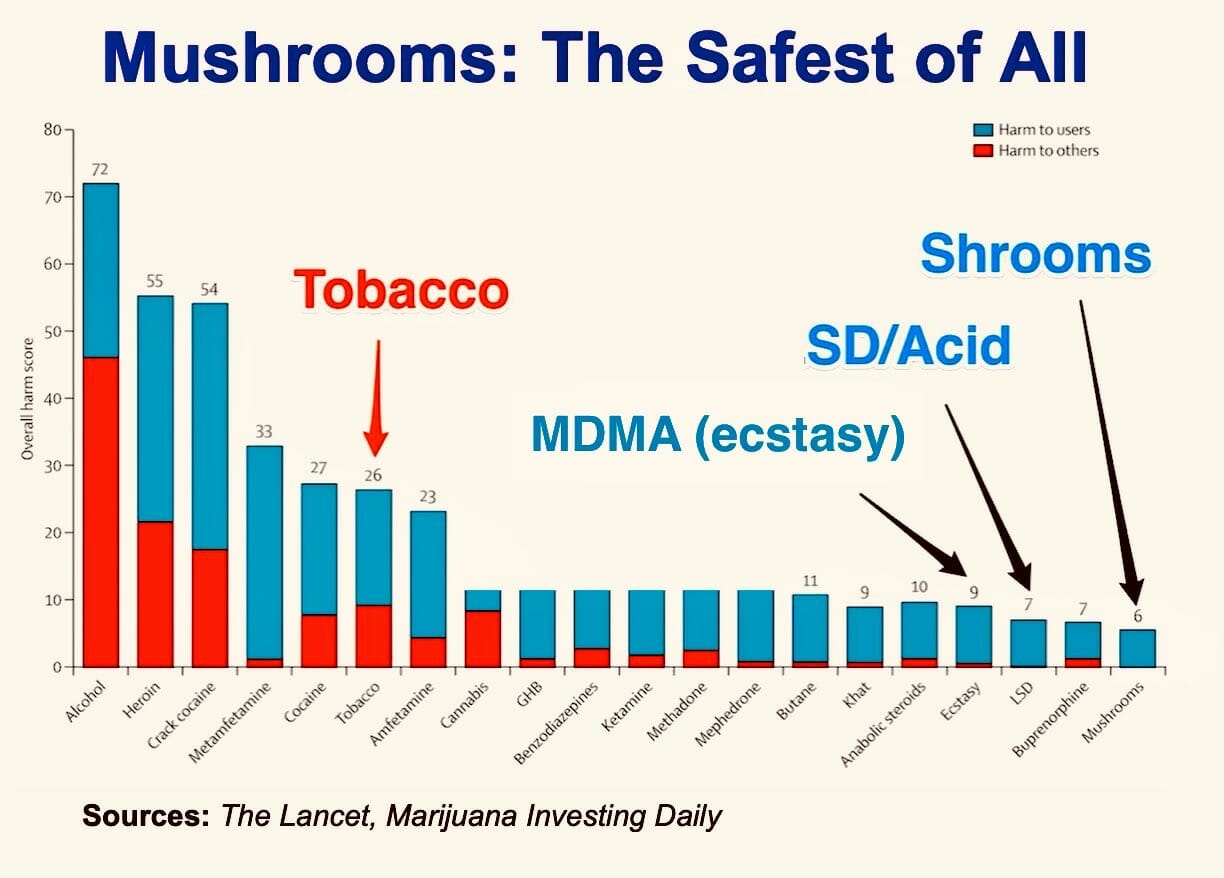 Mushroom advocates throughout the nation are pushing for wider decriminalization, in a trend that brings to mind the early efforts to normalize marijuana laws. Notable developments:

In Oregon, an initiative is on the ballot for November 2020 to make mushrooms legal under licensed medical conditions.

A New York lawmaker recently introduced a bill in the State Assembly to decriminalize psilocybin mushrooms by removing the main active ingredient from the state’s list of controlled substances.

A Vermont lawmaker has introduced legislation to decriminalize psychedelics and an Iowa legislator has called for the legalization of psilocybin in another bill.

The Washington, D.C. Council unanimously approved a bill that would help activists behind a psychedelics decriminalization measure qualify for the November ballot.

The DC bill would allow ballot initiative campaigns to electronically distribute petition sheets to their signature gatherers and let those petitioners return their collections to organizers in digital form. The measure is designed to help organizers get around social distancing posed by the COVID-19 pandemic.

This year, the first biotechnology firms to develop medical treatments from psychedelic drugs such as LSD and psilocybin have gone public on Canadian stock exchanges.

An increasing number of neuro-pharmaceutical companies are operating clinical drug trials of psychedelic treatments and some have even gotten the green light for testing from the U.S. Food and Drug Administration. These trials are a legal means for fledgling for-profit companies to perform research on otherwise illegal drugs.

Marijuana has undergone a similar transition from illicit substance to miracle wonder drug. As the medical benefits of marijuana become increasingly apparent, a wave of states and cities are legalizing cannabis.

Marijuana already has metamorphosed into a multi-billion-dollar industry. Looking to make money on marijuana legalization? For our latest research on the most profitable cannabis stocks, click here.

In the meantime, watch this space for emerging investment opportunities in psychedelic drug treatments. They’ll be a fast trip to profits.