Cashing in on Financials

Over the past three months, the stock market has been an options trader’s paradise. Price movements that usually take years to occur have been happening in a matter of weeks. In a moment, I’ll show you one way to profit from this trend.

That is a remarkable rebound given how bad the economic news has been lately. In April, unemployment rose to its highest level ever since being tracked 72 years ago. At the same time, consumer spending suffered its biggest decline ever recorded.

Watch This Video: The Calculus of COVID-19

You may be thinking that it is too late to get in on the action. The good news is that it’s not too late. However, you will need to be smart about how you do it.

I don’t recommend betting on SPY to keep going up. That’s because the index is cap-weighted, so bigger stocks have more influence on its performance. With a market cap of $1.4 trillion, Apple (NSDQ: AAPL) has more than 10 times the weight of Amgen (NSDQ: AMGN) and its $131.8 billion market cap.

How big of a difference does that make? At the end of May, the Invesco S&P 500 Equal Weight ETF (RSP) was down 12.1% for the year, more than twice the loss in the cap-weighted SPY. That means a lot of stocks have performed considerably worse than the index.

Therein lays the opportunity for options traders. First, identify sectors within the index that have yet to fully participate in the rally. Second, buy call options on an exchange-traded fund (ETF) for that sector to profit from its recovery.

A friend of mine recently shared a trade with me that he believes could double his money before the end of this year. Here is how it works.

A sector he believes that is likely to recover strongly during the second half of the years is financials. That makes sense. If the unemployment rate starts improving this month as the economy begins to open back up, then most financial stocks should benefit.

The fund he likes is the Financial Select Sector SPDR Fund (XLF). That is also a good choice. XLF has more than $17 billion in assets and is widely traded so liquidity is not a problem. At the end of May, it was down nearly 23.3% for the year. That is more than four times the decline in SPY. 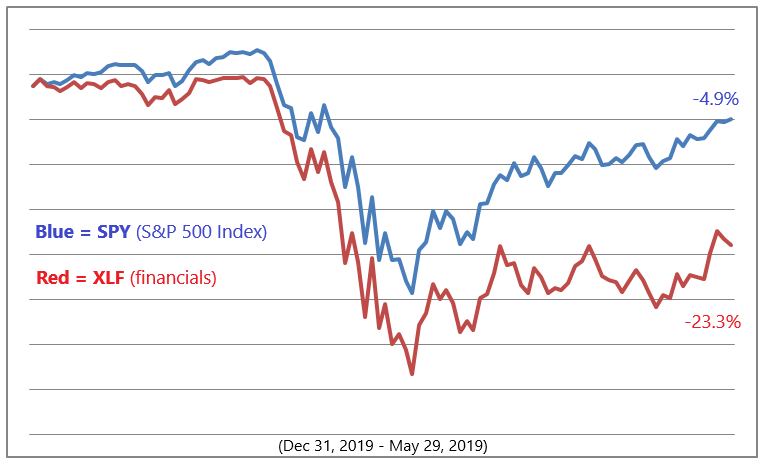 His logic is sound. If the economy recovers quickly enough to justify the huge recovery in SPY over the past two months, financial stocks shouldn’t be far behind.

The breakeven point is $24.70, which is the $22 strike price plus the net cost of placing the trade. To the extent XLF rises above that price prior to expiration, this trade will be profitable.

The downside risk is if XLF falls below $22 at expiration. In that case, this trade results in a complete loss.

There is another risk to this trade. If XLF rises above $28 before expiration, selling that option was a bad move. That’s because any gain above that price will benefit the person to whom that option was sold.

As you can see, you really need to know what you are doing to engage in this type of trading. If you do not, I suggest you follow the advice of my colleague, Amber Hestla.

The team at Investing Daily makes you this bold promise: Over the next 12 months, if the gains from all of Amber’s winning trades don’t add up to at least 1,000%… Just let us know, and we’ll give you a second year of Profit Amplifier… absolutely free.