How to Trade When the Numbers Don’t Add Up

I noted with amusement this newspaper headline from last week: “U.S. stocks cap off best 50-day run since 1933.” My initial reaction was, “That sounds like great news!” My next thought was: “I wonder how many people know what happened to the stock market after 1933?”

In a moment, I’ll share a trading idea with you that should pay off handsomely over the next 18 months. But first, a brief history lesson is in order.

The Dow Jones Industrial Average finished 1933 near 100, more than double its lowest reading that year. That’s the good news. The bad news is that 10 years later, the DJIA was valued at 136. That works out to a compound annual growth rate (CAGR) of roughly 3.1%. 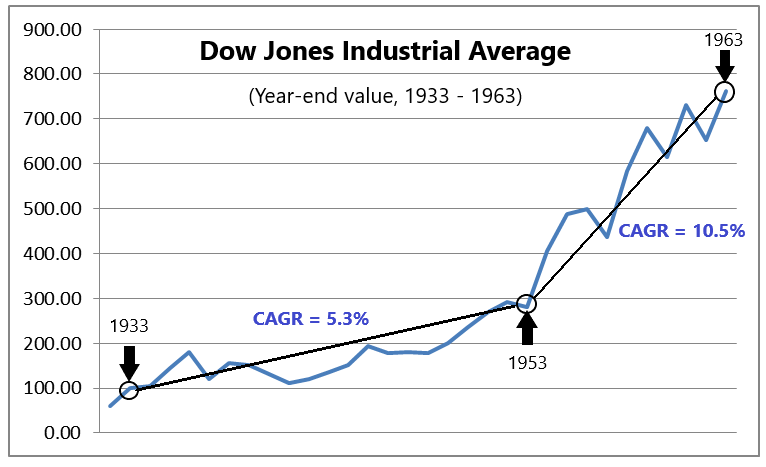 So, if you’re busy extrapolating the past 50 days of stock market performance into the future, stop wasting your time. It isn’t going to happen. Instead, the more likely scenario is a series of ups and downs with only incremental progress.

Just how optimistic are some investors feeling these days? Last week, a call option on the S&P 500 SPDR Trust ETF (SPY) with a strike price of $325 that expires at the end of this year was selling for $25. For this options trade to be profitable, SPY would have to rise more than 9% over the remainder of the year.

Apparently, investors are more sanguine about the stock market’s prospects over the next six months than they are for next year. That same option expiring at the end of 2021 could be bought for $35. That requires an increase of only 11% over the next 18 months to make a profit.

To my way of thinking, at least one of these call options is mispriced. If you believe the stock market will rally strongly later this year, why would you believe it will hardly increase at all the following year?

This type of trade is known as a “calendar spread” since the two options on the same underlying security have different expiration dates. In this case, I believe the call option expiring this December is overpriced and the one expiring a year later is underpriced.

If SPY ends this year below $325 this year, then the first half of the trade is over without further obligation. If SPY does rise above that price, I will lose money on that trade but should make more money on the other trade.

To the extent SPY rises above $325 before the end of 2021, that option will have intrinsic value. Under this scenario, I want SPY to end this year just below that price and then soar above it next year. If that happens, SPY needs to rise above $335 before the end of next year for this trade to break even. Everything above that would be profit.

A calendar spread is not usually my investment vehicle of choice. Normally, call options on SPY are priced more rationally. However, there is nothing rational about the stock market at the moment.

If both of these options are priced correctly, then that implies that the economy may falter next year. I think just the opposite is more likely to occur.

The stock market has staged a remarkable rally since bottoming out on March 23. I believe it will end the year within a few percentage points of where it is now after going through another V-shaped pattern beginning this summer.

Next year, however, could be a very different story. Major macroeconomic events like the coronavirus pandemic have very long tails. They trigger a domino effect of societal and financial repercussions with Darwinian ruthlessness. In this case, I expect:

The list goes on. This year will be an earnings disaster for many companies. But next year could be a bonanza for businesses that have the resources to adapt to the new economic environment.

Editor’s Note: Our colleague Jim Pearce has just given you valuable money-making advice. But here’s some investment news you might have missed: The marijuana revolution is happening all over again!

All-natural “magic mushrooms” are on the fast-track to getting approval for medical use and they could dominate health markets.

Magic mushrooms are destined to play key roles in the future of therapy, in medicine and psychiatry. Now, one company is positioned to win it all. Click here for details.