The “Creative Accounting” Behind the Rally

For insights into the human comedy, I often turn to the great American humorist Mark Twain. His sophisticated wit is timeless. More than a century ago, Twain commented: “There are three kinds of lies: lies, damned lies, and statistics.”

What was true in the 19th century is especially true in this century. The contemporary press tends to regurgitate smooth-sounding government narratives that are actually based on statistical malarkey.

Today, it’s my duty to inform you that the market-moving employment report for May doesn’t add up. Stocks have been soaring lately due to optimism over the economy, but I’m skeptical.

A closer look at the evidence suggests that the jobs picture is grimmer than it appears and we’re in the throes of a stock rally that’s unsustainable. Below, I explain why. I also steer you toward appealing safe haven assets to protect your portfolio.

The bulls take a victory lap…

The bulls now feel vindicated in their belief that a V-shaped recovery is in the making. The S&P 500 has mostly recovered its losses year to date.

The disconnect between the stock market and the political-economic situation is stark. Last week’s violent civil unrest evoked images of America in the strife-torn year of 1968. At the same time, tensions between the U.S. and China escalated, not only over trade but also China’s crackdown on Hong Kong. Corporate earnings growth languishes in the cellar and projected economic growth resembles the Great Depression.

And yet, Wall Street has shunted those concerns aside. By the closing bell last Friday, the S&P 500 had racked up its best week in eight weeks, finishing only 6% from its record high in February (see table). 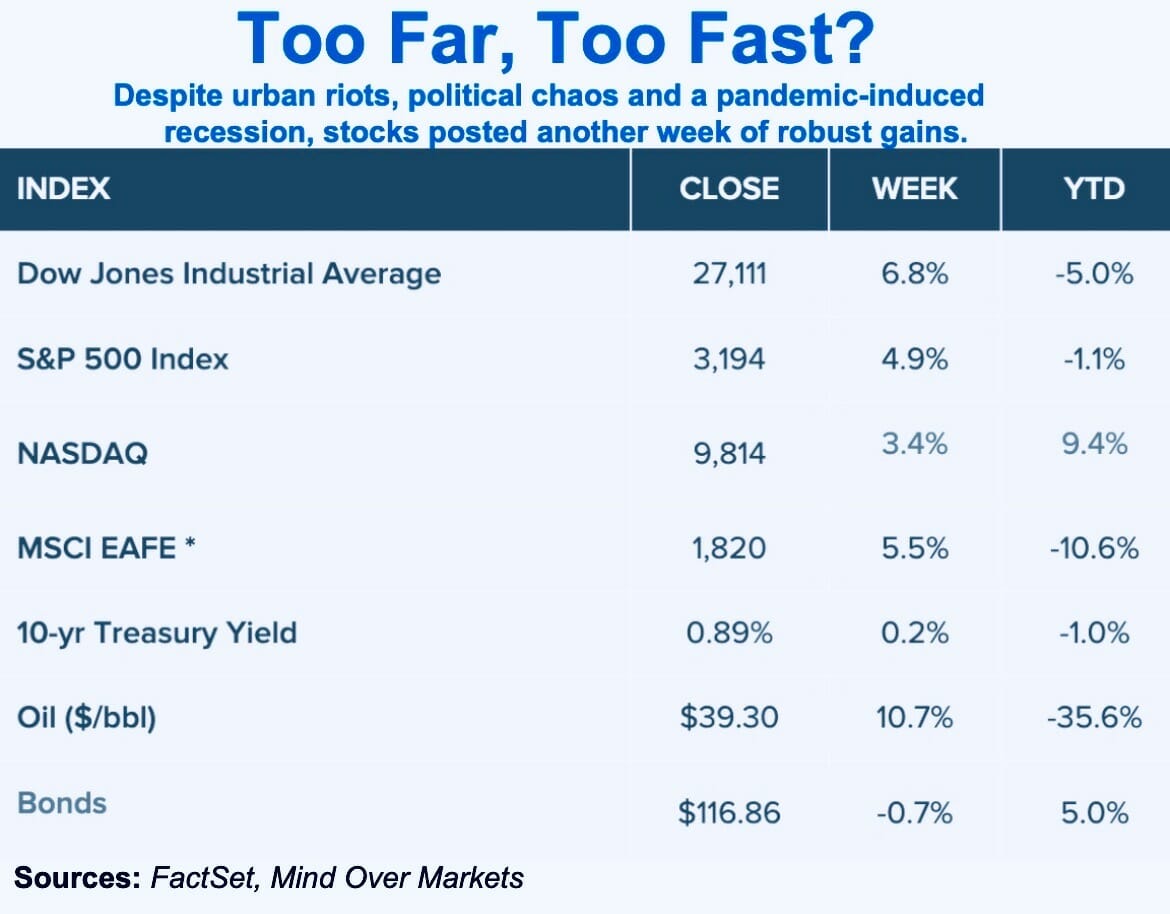 A large portion of those weekly gains came Friday, in the wake of the jobs report for May. The report was ostensibly strong, exceeding expectations. I hate to be a spoilsport, but if you look beneath the headline numbers, the underlying situation isn’t so rosy.

For starters, the labor report in a footnote stated that a “misclassification error” led it to understate the unemployment rate by three percentage points. Without the error, the report notes, the jobless rate last month would have actually gone up to 16.3% from 14.7%, not decreased to 13.3%.

Maybe I’m too cynical, but this seems like “creative accounting” to me. As Mr. Twain said: lies, damned lies, and statistics.

Many journalists are lazy and don’t read the fine print. It’s how investors get conned into popping the Champagne over a supposedly blockbuster jobs report that’s actually a lot weaker than it seems.

I won’t go so far as to accuse the Labor Department of purposely cooking the books, but this mysterious error certainly throws cold water on the enthusiasm that’s been generated by the report.

What’s more, as fiscal stimulus fades, the employment numbers are likely to deteriorate again. The federal Payroll Protection Program compels companies to retain workers for at least eight weeks to receive funds. The majority of the employment gains in the May jobs report derived from subsidized companies in the hardest-hit industries (e.g., restaurants and hospitality). These firms are either closed or operating at reduced capacity.

When wage subsidies expire in July 31, we’ll get a more accurate picture of employment. It’s worth noting that the odds of Congress extending the subsidies are slim. The fiscal stimulus passed so far has undoubtedly helped, but more is needed and the two political parties remain deadlocked on further action.

The inexorable pull of history…

“It’s different this time.” Those are the four most dangerous words in the English language. Shouldering more risk because you think the time-proven rules no longer apply is a hallmark of the dumb money crowd.

And here’s an historical rule that the stock market bulls are choosing to ignore: bear market rallies are intrinsic to a bear market. Triggers for another downward leg abound.

Consider the fact that millions of U.S. households right now can’t afford the basics to live. Many workers who still have paychecks have seen their pay slashed and it’s doubtful that all of those reduced paychecks will be restored to pre-pandemic levels.

Returning workers will face fewer hours, slimmer pay envelopes, and greater economic vulnerability. Millions of companies are destined to go out of business and consumers will be skittish about returning to their normal behaviors.

Read This Story: Investors Aren’t Out of The Woods Just Yet

I’m an optimist by nature and it gives me no pleasure to warn you that the current stock market rally will probably end in tears. Earlier this year, we witnessed a fast and furious bear market. History shows that the first rebound often mimics the ferocity of the original crash.

Sharp but ultimately futile rallies regularly occurred during the Great Depression. Aggressive bear market rallies characterized the dotcom bust of 2000-2002 and the global financial crisis of 2007-2009.

During the 2007-09 downturn, the S&P 500 lost more than 50% of its value. In November 2008, after Lehman Brothers had imploded, the S&P 500 embarked on a 24% rally as investors told themselves that the worst of the financial crisis was over. But the rally fizzled and lost about 28% before finally finding a bottom two months later.

The market’s current rally from its coronavirus lows confirms the wisdom of staying invested during crises and not panicking. But the danger isn’t over and you should be mitigating risk by deploying defensive measures. For our report on top-quality safe haven assets, click here now.