The coronavirus pandemic has badly battered the airline industry. The major air carriers have lost billions and it will be many months, perhaps years, before they return to profitability.

How dismal are prospects for the airlines? Warren Buffett has turned his back on the industry. That’s a bearish indicator if I’ve ever seen one.

Buffett’s Berkshire Hathaway (NYSE: BRK.A, BRK.B) revealed in its first-quarter earnings report that it dumped all of its shares of Delta Air Lines (NYSE: DAL), American (NSDQ: AAL), Southwest (NYSE: LUV), and United (NSDQ: UAL). Berkshire had an 11% stake of Delta, 10% of American, 10% of Southwest, and 9% of United. The amount of stock sold totaled $6.1 billion. Berkshire took a big loss, the amount of which it hasn’t disclosed.

The dire straits of airlines and their related industries, due to the pandemic’s destruction of passenger demand, prompted me this week to interview an analyst who’s widely considered to be the foremost expert on the aviation sector: Richard Aboulafia, vice president of analysis at the aerospace/defense consultancy Teal Group. He’s pictured to your left. 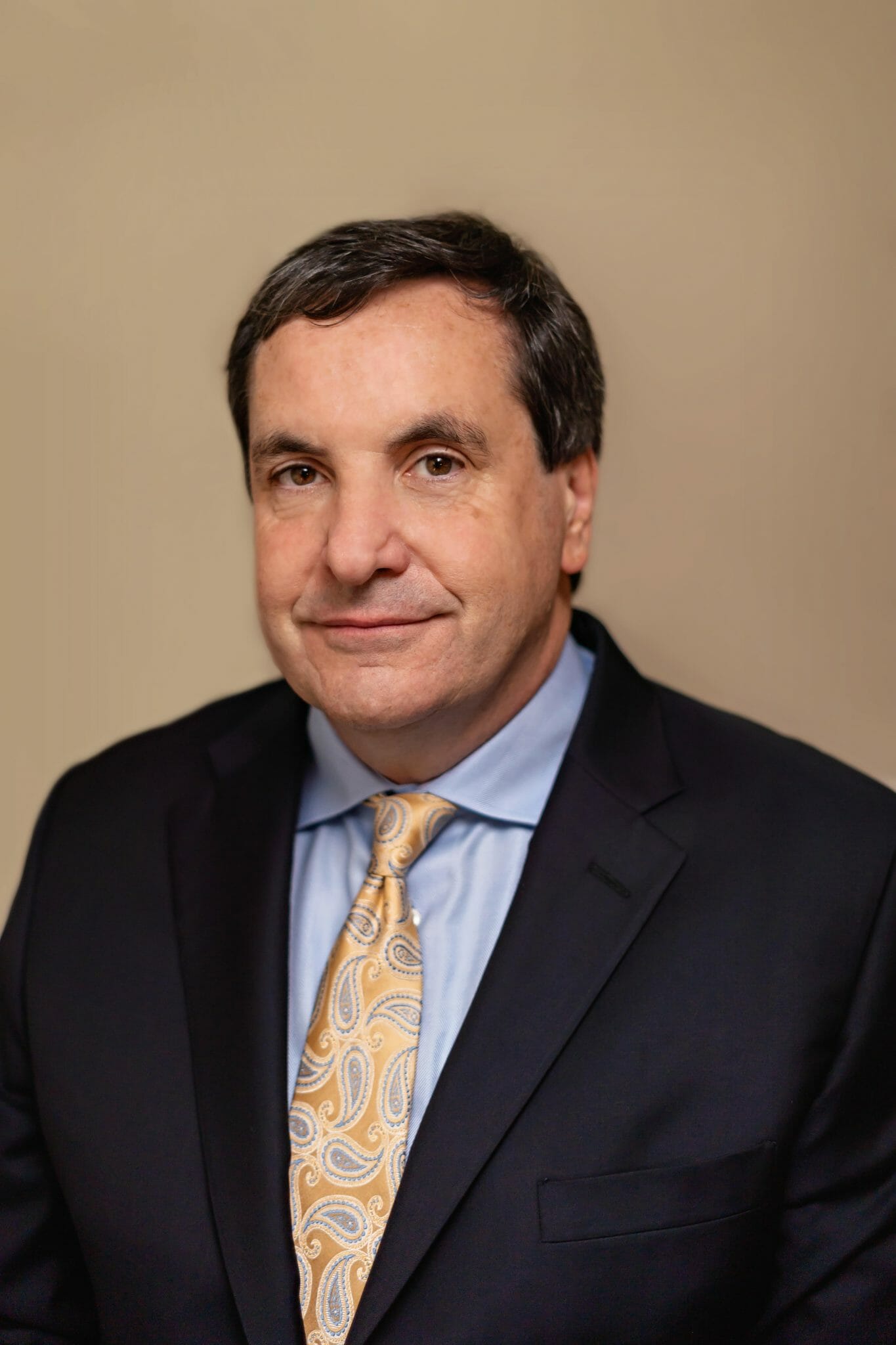 I specialize in the aerospace/defense sector. [Full disclosure: I occasionally work as an analyst for Teal, which is based in Fairfax, Virginia.] Richard has been a friend and colleague for more than 30 years.

As a consultant, Richard usually charges corporate CEOs and Wall Street bigwigs thousands of dollars for just an hour of his time. This week, I bought Richard’s expertise for a beer and a hamburger on my patio.

Let’s see what Richard has to say about airlines and the aerospace/defense sector as a whole, and what it all means for investors.

Because of the COVID-19 outbreak, the airline industry on average is losing $350 million to $400 million per day. It’s a tough question to ask, especially as we witness a second wave of coronavirus cases, but how long do you think it will take before the industry returns to normal, if ever?

I’m kind of a vaccine fundamentalist here. Assuming we get one within 18 months, traffic should recover to 2019 peak levels by late 2023. It’s possible that an effective post-infection remedy drug will help the angle of the “Nike Swoosh” recovery we seem to be starting, but that still isn’t the same as getting back to where we were.

In the meantime, we’re in a completely unprecedented place, with year–over-year demand down 80% or more, as you can see in my first chart, and with the total year likely to be down at least 55%. 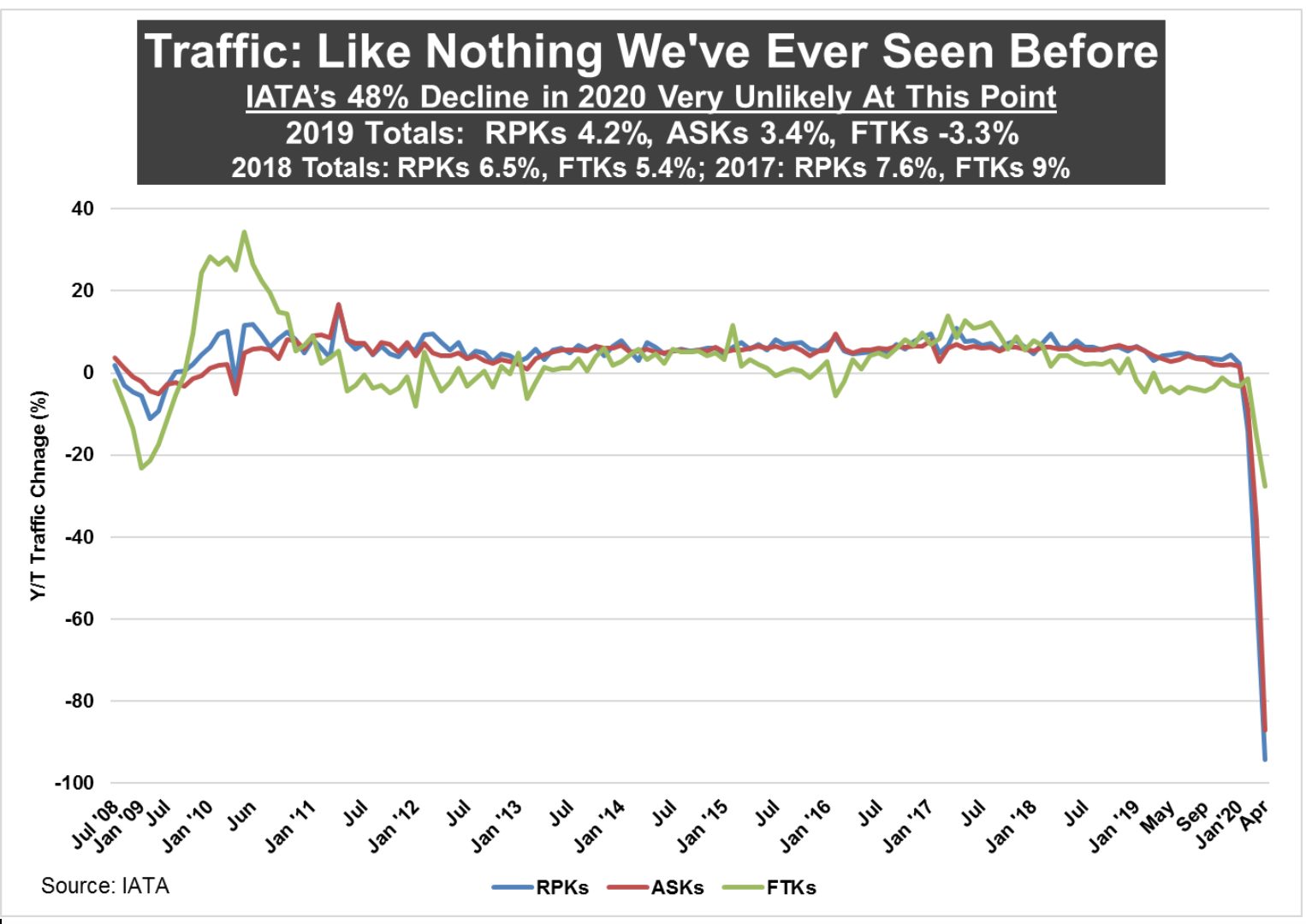 The worst the industry had ever seen before was a decline of just over 3% on a year-over-year basis. And as our second chart shows, orders have collapsed, and will stay collapsed. Backlogs are large, but more and more scheduled orders are being deferred, until traffic recovers.

Do you think one of the major air carriers will simply go out of business? For historical context, remember that Pan Am and TWA were iconic brands with rich historical legacies. They’re now in the dustbin of capitalism.

You can’t rule it out. It depends on the shape of the recovery, which itself depends on big epidemiological questions, and on any additional government aid. For now, I’d regard Chapter 11 bankruptcy for one or two of the carriers as the worst case scenario, but again at this point anything is possible.

One thing to remember is that the airlines spent the last decade successfully restructuring. Think about how many airlines this country used to have. I share your Pan Am nostalgia, but they were one of many airlines that could claim to be some kind of flag carrier.

Today, there’s just United, American, Delta, and of course Southwest, which will always be Southwest. Some of the other marginal players may be at risk, but the big guys are almost certainly too big to fail.

Should investors simply follow Buffett’s cue and stay away from airline stocks?

It really depends on two things: their tolerance for volatility and their time horizon. It’s also kind of a funny quirk of the industry and our circumstances. Airlines now have everything they’ve ever wanted. Fuel is about as cheap as ever. Top quality, efficient jets are available at fantastic discounts.

There’s generous government support, in the U.S. and many other key markets, at least for the next few months. The cost of capital (which remains available, unlike in the 2008 downturn) is back down near nothing. And crew costs will stay low for some time. There’s certainly no risk of a “pilot shortage” anytime soon.

As the industry starts digging out of this mess, whether it’s in 2021 or 2022, airlines will most likely still have these great conditions. Then, they will be able to choose whether to stimulate traffic with low fares, focus on profitability, or some of each. Airlines could again look like a good investment around then, particularly since getting rid of the weakest players would provide a better industry for the stronger ones. In the meantime, jetliner orders have fallen off a cliff, which hurts OEMs such as Boeing (NYSE: BA).

Let’s turn our attention from basket cases to opportunities. Global defense budgets are soaring and geopolitical risks are rising, conditions that are manna for defense contractors. The aerospace/defense sector, of which the airlines are a subset, seems to be an appealing source of investment profits these days.

As the saying goes, defense is defensive, and that’s never been truer. Defense budgets look well-protected, and this election is likely to revolve heavily around China, which should be good for defense spending. Pure-play defense primes such as Northrop Grumman (NYSE: NOC) and Lockheed Martin (NYSE: LMT) will weather this pandemic better than almost any other business.

Our third chart shows the history and forecast of military aircraft output in the U.S. This is a very buoyant market, with the F-35 continuing to ramp up, and new programs like the B-21 and T-7 just getting started. Legacy combat aircraft, like the F-15, F-16, and F/A-18 are good for at least another decade too. 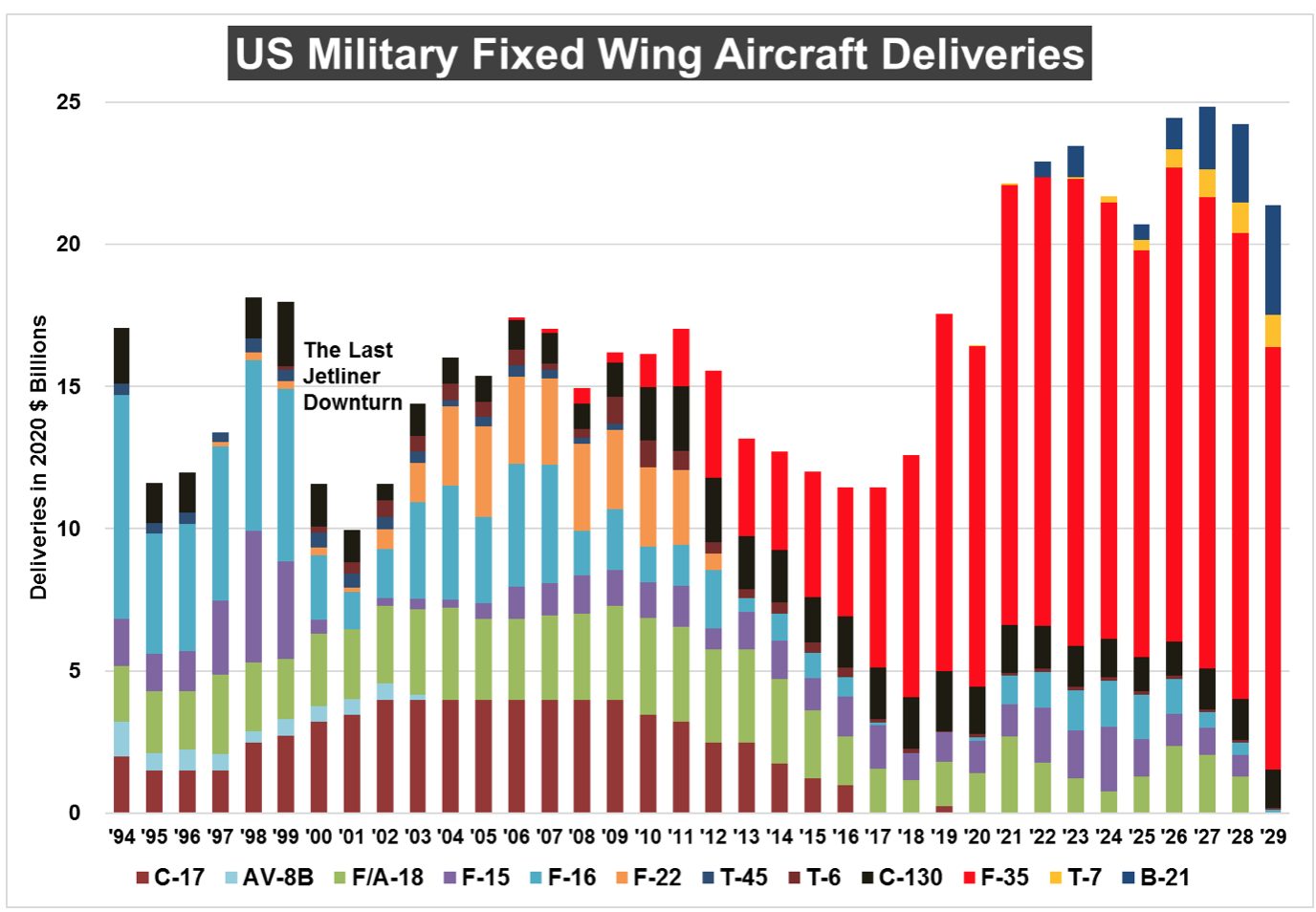 Ancillary segments are tough since pure-play defense suppliers are hard to find. Almost everyone in the supplier industry has heavy exposure to the very challenging commercial market.

Having said that, I agree, and really like the niche defense electronics sector. Not only are they nicely exposed to that growing military aerospace new-build market, but they also do well with upgrades to existing systems. As older fleets of military aircraft age, new sensors, electronic warfare systems, communications, and other avionics are vital insertions in upgrade programs.

Editor’s Note: My interview with aviation expert Richard Aboulafia just provided you with valuable investment insights, but I also urge you to consider the expertise of my Investing Daily colleague Jim Fink.