From Hype to Maturity: Mary Jane Grows Up

When I went to college, a former peanut farmer was president, I wrote my term papers on a manual typewriter, and you could get thrown out of school for smoking pot on campus.

Today, a former realty television star is president, all schoolwork is done on computers, and many colleges offer courses in how to be a marijuana entrepreneur.

That’s right, in a sign of marijuana’s maturation into a respectable business, colleges now offer courses in everything from how to grow pot to the basics of canna-business management. Mary Jane has traded her hippie garb for a business suit.

Below, I examine marijuana’s evolution from illicit substance to mainstream capitalism, as well as the bumps the industry has endured along the way.

During the marijuana industry’s go-go days in 2018, investors were clamoring to jump into pot stocks. It was “the green rush” and cannabis was one of the biggest investment fads around. Then the bubble burst (as I predicted it would) in late 2019.

And the state of marijuana investing today? Cannabis is back, stronger than ever. Don’t simply take my word for it. Look at the following chart.

Over the past three months, the marijuana industry benchmark exchange-traded fund (ETF), the ETFMG Alternative Harvest ETF (MJ), has gained 36.6% compared to 23.1% for the S&P 500 (as of market close June 17).

Marijuana’s market-beating momentum should continue for the rest of 2020 and into 2021, for a confluence of powerful reasons.

The coronavirus pandemic has been brutal for the economy and many stocks, but it’s been a godsend for marijuana. Several states have deemed marijuana an “essential service” and allowed pot businesses to remain open during lockdowns.

Consumers are waiting in long lines in front of dispensaries, keen to hoard marijuana during the pandemic. Pot consumption is skyrocketing amid the loneliness, boredom and anxiety generated by quarantine. Marijuana companies are reporting record sales and profits, a far cry from their generally dismal operating results of last year.

Marijuana executives also are maturing. The incompetent stoners have been weeded out (pun intended), to be replaced with seasoned veterans of corporate America. Pot companies are less prone to take on debt and make reckless acquisitions. Balance sheets are improving and consolidation has produced several well-capitalized survivors.

Most of the fly-by-night operations that overpromised and underdelivered have gone belly up. The dubious penny stocks and pump-and-dump schemes have largely evaporated. That’s all healthy for the industry and its investors.

Maturing beyond the hype…

To explain the current dynamic in the marijuana industry, let’s turn to a phenomenon that I call “The Disruption Hype Cycle.”

The Disruption Hype Cycle represents the maturity, adoption and social application of “disruptive” products. Each Hype Cycle describes five crucial phases of a disruptor’s life cycle. Take a look at my diagram: 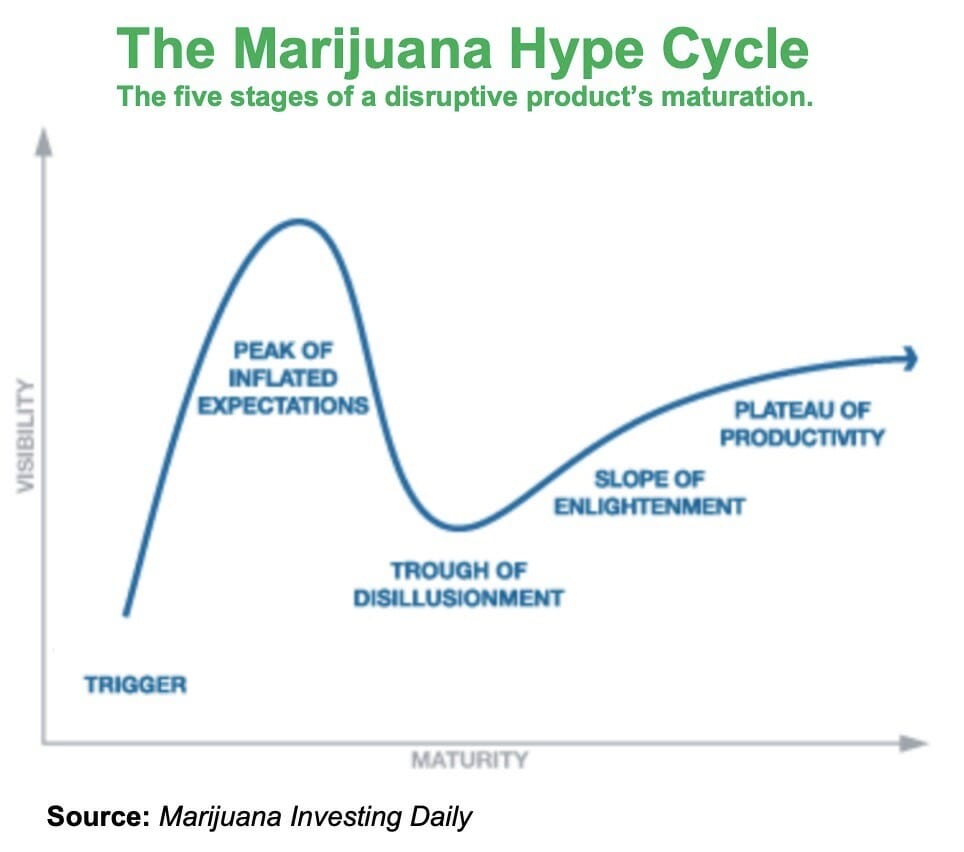 1) Trigger: A breakthrough kicks things off; excitement builds. In marijuana’s case, it’s the start of legalization and decriminalization.

2) Peak of Inflated Expectations: Early publicity spawns a flurry of success (and failure) stories. Some companies adapt; others fall by the wayside.

3) Trough of Disillusionment: Interest diminishes as reality fails to live up to the hype. A shake out ensues, but the smartest early adopters survive and continue to invest and experiment.

Simply put, marijuana already has passed through its hype and disillusionment periods and it’s currently in the midst of the slope of enlightenment, to eventually reach a plateau of productivity for sustainable, long-term growth.

A new “disruptor” enters the scene…

Now, the cycle of hype is starting all over again, with a completely different psychoactive substance.

A major disruptive trend is the decriminalization of psilocybin fungi, aka “magic mushrooms.” The magic mushrooms of counter-cultural lore are becoming a mainstream for-profit business, as a growing number of local governments decriminalize their use.

Magic mushrooms contain a naturally occurring psychoactive and hallucinogenic compound called psilocybin. Research shows they can help ease physical pain, depression, anxiety, chronic headaches, PTSD, and a host of other ailments. Magic mushrooms are destined to play key roles in the future of therapy, in medicine and psychiatry.

The “trigger” for the greater visibility of magic mushrooms was the passage in Denver last year of an initiative decriminalizing the fungi, the first jurisdiction in the U.S to do so. Now, we’re witnessing a nationwide movement to loosen restrictions on magic mushrooms, igniting the start of an upward trajectory.

In California, the Oakland City Council recently approved a measure to make a wide range of psychedelics among the city’s lowest law enforcement priorities. Santa Cruz has followed in Oakland’s footsteps. Activists in more than 100 cities this year are pursuing similar policy changes.

Companies that grow, process and sell magic mushrooms are in their infancy, as was the case when marijuana legalization was about to take off. The time to get aboard the trend is now, during its early ascent.

Our analysts have been researching the exciting investment opportunities in magic mushrooms. In fact, we’ve pinpointed one company that’s poised to dominate this emerging industry and reap the lion’s share of the investment spoils. Click here for details.