Why Smart Investors Are Shaking Their Heads

To use the texting parlance of my millennial daughter, the argument that we’ll experience a rapid economic recovery makes me SMH (shake my head). The evidence isn’t there.

Consider the situation with jobs. Unemployment is still higher than it was for most of the Great Depression. Let that sink in.

Pandemic Unemployment Assistance (PUA) claims, a federal program for self-employed workers, independent contractors and others ineligible for conventional benefits, added 760,000 to the total.

Yes, the pace of layoffs has slowed since late March. However, the 13-week total now comes to 46 million unemployed Americans (see chart). 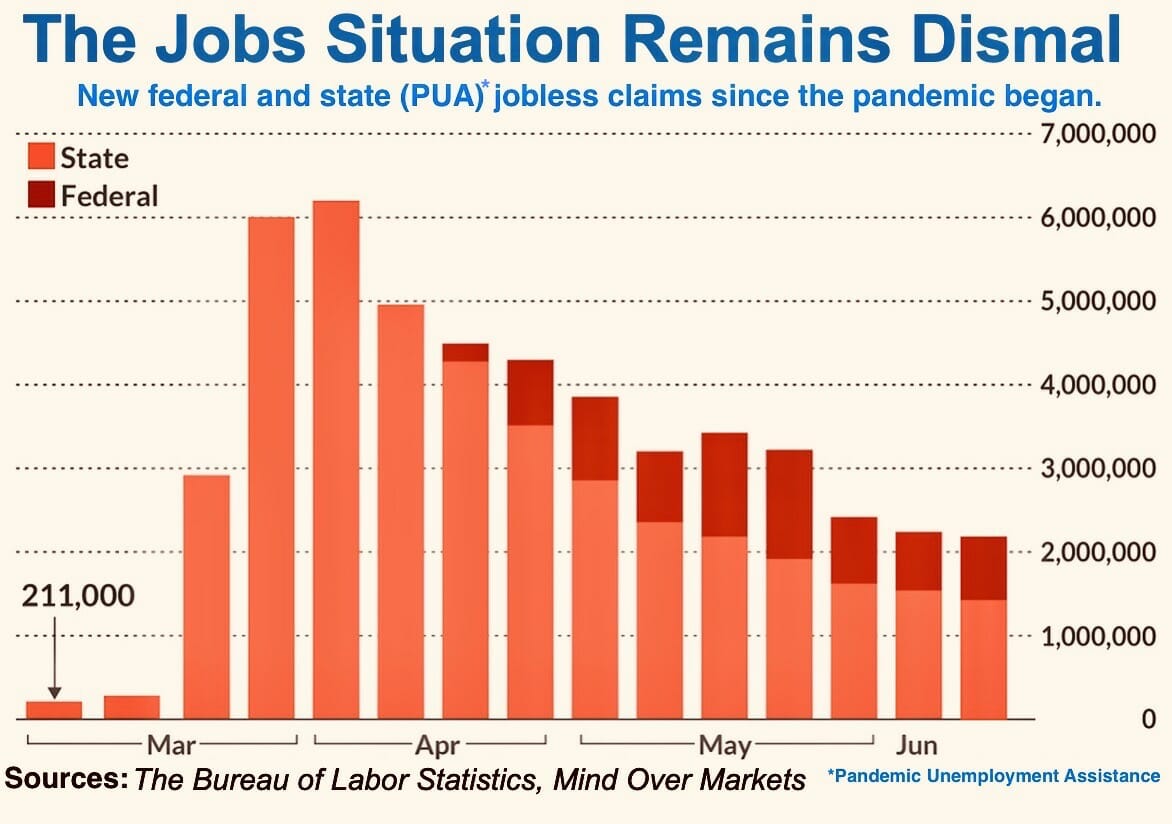 Officials expect a wave of bankruptcies this year, resulting in a permanent loss of jobs. Many furloughed workers won’t get their jobs back.

The coronavirus pandemic has scarred American life. Just because a talking head on CNBC says the economy is roaring back doesn’t make it so.

The Paycheck Protection Program, which provides small business loans that can be converted into outright grants if they’re used to sustain payrolls, is already out of money and the job support lasts only eight weeks.

Also keep in mind, Congress has yet to provide relief to struggling state and local governments, which are grappling with a massive fiscal crisis and have collectively laid off 1.5 million workers. Further public sector layoffs lay ahead unless federal aid is forthcoming (and it probably isn’t).

You also might be surprised to discover what the Bureau of Labor Statistics defines as an employed person. Here are the official government criteria:

In other words, if you technically have a job, you are considered “employed” regardless of whether you worked a single hour during a surveyed week. That means underemployment, in which people need or want more hours, is not a factor in the tabulations.

The flight to safe havens…

Small wonder that the markets have been volatile. Global stock markets swooned Thursday in choppy trading, as a spike in coronavirus cases in countries around the world dampened hopes for a rapid economic recovery.

The three main U.S. stock indices seesawed Thursday and ended mixed. The Dow Jones Industrial Average fell 0.15% and the S&P 500 rose a meager 0.06%, although the tech-heavy NASDAQ composite managed to eke out a fifth straight gain and close up 0.33%. Demand rose for safe-havens such as the U.S. dollar; Treasury yields dropped for the second consecutive day.

The Dow continues to show the most weakness among the major indices, with cyclical stocks volatile and under pressure. In pre-market futures trading Friday morning, U.S. stocks were poised to open higher.

The stock market isn’t the economy, but in recent weeks it seems disconnected from reality in general. Fueling the stock market’s rise from its late March low has been stimulus from the Federal Reserve. The central bank’s balance sheet has climbed from $4 trillion in March to $7.21 trillion last week.

But monetary stimulus alone won’t be enough to get us through this crisis. The restarting of the economy will be slow and arduous, with many setbacks along the way. Rising infection rates are undermining the narrative of a V-shaped recovery.

After the initial coronavirus-induced crash, the Federal Reserve stepped in and pumped trillions of dollars of liquidity into the markets. The result was a stock market relief rally that eventually accelerated into a Fear Of Missing Out (FOMO) rally.

FOMO represents lemming-like behavior at its worst and it’s a reliable contrarian indicator that stocks are poised for a fall. The dynamic is based more on greed than fundamentals.

We’re experiencing an asset bubble during a time of extreme economic hardship. Everywhere you look, the math doesn’t add up.

Corporate earnings growth is projected to be negative for the rest of 2020, we’re officially in a severe recession, and millions of Americans can’t afford the basic necessities of life. To see this kind of jobs destruction, you have to go back to the 1930s. Meanwhile, health experts expect the U.S. death toll from coronavirus to reach 200,000 in the autumn.

I’m an optimist by nature. It gives me no pleasure to point out these realities. So what can an investor do? Pocket some of your gains to elevate cash levels. Make sure your portfolio contains exposure to safe haven stocks, especially utilities.

For the best utility plays now, click here for our report. These all-weather stocks allow you to stay invested but also offer protection from the sell-offs ahead. And keep reading Mind Over Markets for investing analysis and advice, five days a week.

John Persinos is the editorial director of Investing Daily. He writes Mind Over Markets, Monday-Friday. You can reach him at: mailbag@investingdaily.com