Apple: Knowing When to Let Go

A friend stopped by for a chat the other night. Of course, we practiced social distancing by sitting outside and at least six feet apart. But that didn’t prevent the conversation from being lively as we discussed a wide array of topics.

Eventually, the subject of investing came up. I am often asked for my opinion of certain stocks given the nature of my work. Specifically, my friend wanted to discuss Apple (NSDQ: AAPL), which he inherited when his father died 15 years ago.

Back then, it was worth about $2,500. Now, thanks to stock splits and share price appreciation, it is valued at closer to $175,000. To my friend’s credit, he never sold it despite having to put two kids through college over that span.

But now he’s wondering if it’s time to sell it after its successful developer conference this week. Despite the economic threat posed by the coronavirus pandemic, Apple is trading at its highest price ever after doubling in value over the past 13 months. 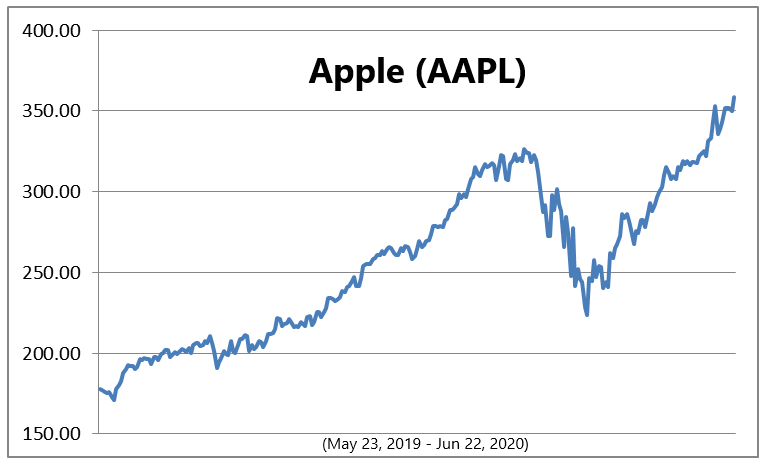 He knows he’ll have to pay a lot of tax on his gain if he sells his shares. However, at a maximum capital gains rate of 20% he figures that might not be so bad. Especially if a second round of COVID-19 sends the stock market reeling again. In that case, Apple could fall a lot further than that.

I asked a few questions and quickly realized that what my friend really wants is more income from this asset. Apple’s 1% dividend yield provides him with less than $2,000 in annual income.

That being the case, I suggested an alternative strategy for generating income from this position while continuing to hold it.

I’ve Got You Covered

The income technique I suggested to my friend is an options trading strategy known as covered call writing. It works like this: For a fee, you sell to someone else the right to buy your shares of stock at a predetermined price within a specified time frame.

For example, a few days ago when Apple was trading near $358, a call option expiring on January 15 at the $350 strike price was selling for $38. That is money my friend would receive right now and his to keep no matter what happens to Apple’s share price.

There are two possible outcomes:

Under the first scenario, my friend will have sold his shares of Apple for $8 less than he could today. However, he would receive $38 in premium income today so he’d still end up with a very nice gain. Plus, the sale of the stock would occur in 2021, deferring his capital gains tax payment on that sale until April 2022.

Under the second scenario, my friend will not have to sell his shares of Apple. After this options contract expires he could turn around and do the exact same thing all over again. In that case, the options premiums he receives amounts to a 10%+ income enhancement (in addition to the dividend income).

To my way of thinking, this is a no-brainer for my friend. He doesn’t really want to sell his shares of Apple, but he needs more income. And if his shares are bought away from him, it will be at a price near Apple’s all-time highest price.

Sometimes, the hardest thing to do with a stock that you’ve held a long time is to part with it. Especially when it has sentimental value, as in the case of my friend who inherited it from his late father.

In those situations, the options market can act as an unbiased arbiter of when it is time to let that stock go. It does not care how those shares were obtained and it will not have sleepless nights trying to decide if it is doing the right thing.

When used correctly, covered call writing can be a great way to significantly increase your current income while allowing your portfolio to turnover at a manageable pace. The only hard part is knowing which options contracts provide the greatest benefit to you.

If you lack the expertise to make that determination, I suggest you follow the advice of someone who does. One such person is my colleague, Jim Fink.

Jim has developed a proprietary options trading method that consistently beats Wall Street at its own game, in markets that are going up, down or sideways. Even better, his scientific system turns around these profitable trades in 60 days or less.