During the late 1980s, when I served as a press secretary for a member of the U.S. House, I was always amazed at how willingly the media carried water for public officials.

The public relations spin of government bureaucrats has the power to move markets and that should trouble you, because officials are willing to say anything to suit their purposes.

Misinformation in the media has been triggering wild market swings, a sure sign that investors should remain wary.

No one knows these inconvenient truths better than my colleague Jimmy Butts, chief investment strategist of the premium trading services Maximum Profit and Top Stock Advisor. Over the course of his long career as an investment advisor, Jimmy [pictured here] has witnessed all manner of market manipulation. 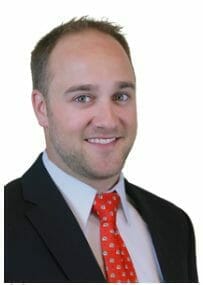 I decided that it was an opportune time to get Jimmy’s take on Wall Street and the media circus. I also asked him how investors should trade now. My questions are in bold.

The stock market has undergone a remarkable rally since its March 23 coronavirus low. Are we in the midst of an asset bubble?

It has been quite the rally for sure. The NASDAQ composite has made new record highs and the S&P 500 and Dow Jones Industrial Average are both up roughly 40% since their March lows. But much of the resurgence in these major indices has been from a small percentage of companies, namely large tech stocks.

While certain stocks or sectors could be in the midst of an asset bubble, I don’t think stocks overall are overly inflated. There are still plenty of opportunities out there in the stock market to make money, without paying a hefty premium on valuation.

What’s driving the rise of tech stocks and can it last?

The work from home movement, innovation and excitement. Over the long term, yes, the rise in tech stocks can last. Technology has become so ingrained into our lives that we rely on it as we do water.

There’s not an industry that technology doesn’t touch. Heck, folks from the water company don’t even come out to check my water meter anymore because it’s now monitored remotely via a wireless device. I even water my lawn from an app on my phone.

Technology has a long growth runway in front of it. Of course, that doesn’t mean we won’t go through periods of drawdowns or stagnation, but right now money flows where it’s treated best and that happens to be in the tech sector.

Does this rally have sufficient breadth? It appears that small- and mid-cap stocks have finally joined the party. Or is the rise still predominantly due to a handful of large caps?

The rise in the main indices is being propelled by some of the biggest names in the game (since most of these indices are market weighted), but overall, there is sufficient breadth in this rally.

One such breadth indicator that I keep a close eye on is the Advance-Decline Line (AD Line), which shows you the number of rising stocks less the number of declining stocks. The line rises when net advances are positive and falls when it’s negative.

For instance, if the S&P 500 is hitting new highs, you can look at a breadth indicator to make sure it, too, was advancing and hitting new highs. That would show strong participation in the market and confirm the bullish trend. However, if the breadth indicator fails to keep pace with the underlying index, this is a sign of weakness in the market, signaling bearish divergence.

The chart below shows two bearish divergences in the NYSE AD Line from June to November 2007. As you can see, the NYSE Composite moved to new highs in July. However, the AD Line peaked at the beginning of June, telling us that there wasn’t strong participation in the new high and thus setting up the first bearish indicator. 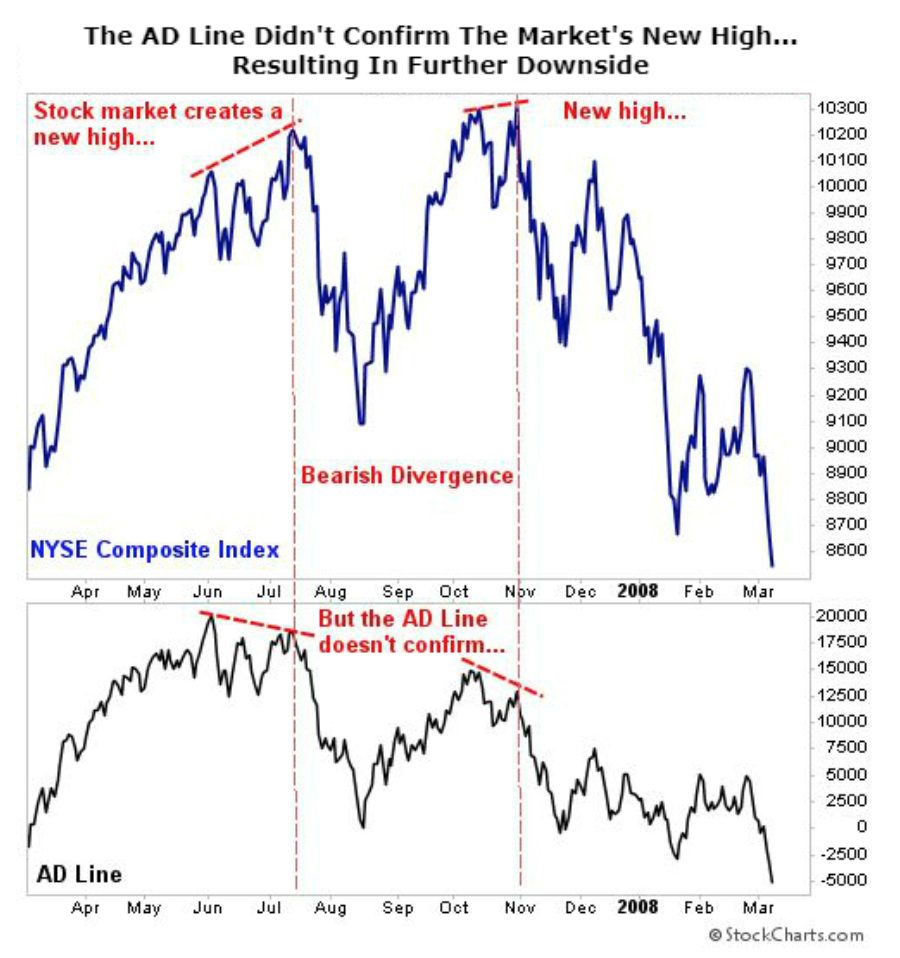 As you can see, the NYSE Composite Index fell over the next couple of months, but then it surged to new highs in October. Once again, the AD Line fell well short of its July high, forming another bearish divergence. Of course, we all know what happened to the stock market after October 2008.

When this breadth indicator is hitting new highs ahead of the market, it means the rally is broad and healthy.

Of course, it’s worth noting that this indicator didn’t provide any warning when the market collapsed from the coronavirus pandemic, but that was a black swan event.

This indicator is used more often to see signs of underlying weakness in the economy or the market (as shown in the chart from 2007-2008 above).

You’ve often pointed out that Wall Street is a “rigged” game. Do you detect signs of insider trading these days predicated on official tweets and pronouncements, as some members of Congress currently allege?

And the markets do react quickly and wildly to tweets and announcements made by officials. Just look at what the market did June 22 after President Trump’s adviser Peter Navarro said the U.S.-China trade pact was “over.” 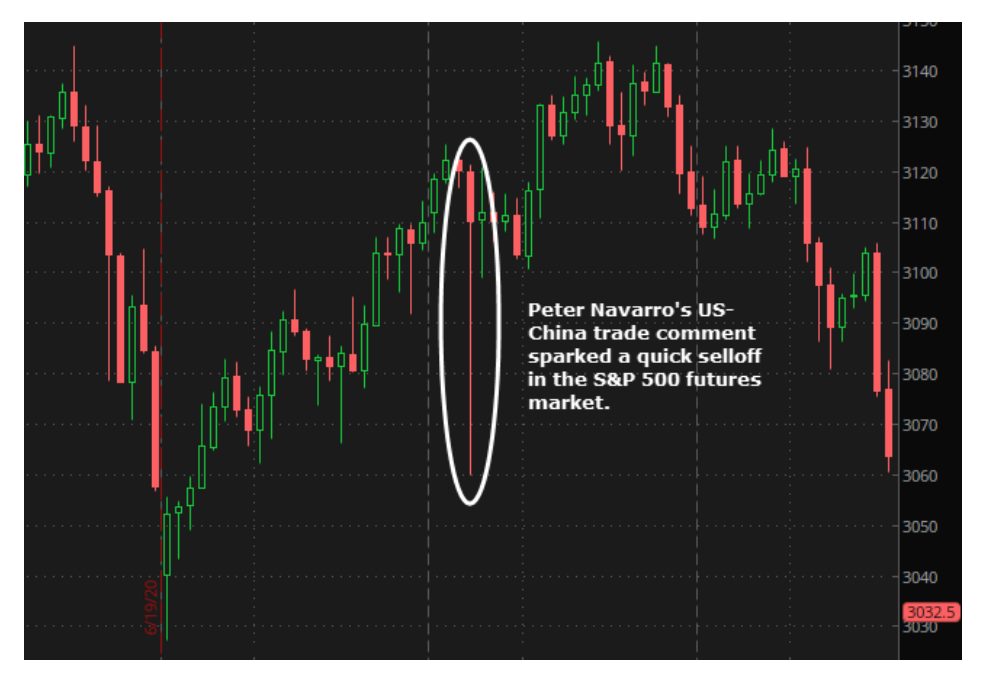 But these sorts of things are hard to predict and get in front of. By the time we know about it the damage (or profits) are done.

Instead, I pay more attention to what company insiders are doing. Are executives, CEOs, or C-suite members buying or selling shares of their stock?

For instance, Charles Davis, who sits on the board of directors for insurance firm AXIS Capital (NYSE: AXS) recently purchased roughly $56 million worth of AXS stock. This gives me a better idea of how confident these folks are in the outlook of the business.

What are a few “defensive” measures that investors should take now?

Of course, it’s wise to always keep dry powder on hand. But right now, the best defense might be offense. Take advantage of this rally. In Maximum Profit, we have a strict set of buy and sell targets. Once we hit a profit target, we pull some of our gains off the table. We also have set sell signals, so we don’t hold onto a losing trade.

So far, it’s worked very well for us. We went to nearly 100% cash before the market bottomed in March, then began deploying that cash back into multiple stocks.

For instance, we added e-signature software company DocuSign (NSDQ: DOCU) towards the end of March and we’re up more than 110% on that trade. Then in May we added a company I dubbed the “Amazon” of Southeast Asia and shares have surged by triple-digits since then.