Overheard at a party: “People tell me that magic mushrooms do more than get you high. Longer term, they can increase mental acuity and physical well-being. I’m curious to try them.”

Snippet of dialogue from a hippie “love in” at Haight-Ashbury in 1967? Nope. It was my neighbor, a guy who’s a college biology teacher, making small talk at a barbecue in my suburban backyard last Sunday.

He was citing scientific literature that attests to the psychological and medical benefits of psilocybin fungi (better known as “magic mushrooms”). Looking for the investment world’s next big thing? Look to ‘shrooms and other psychedelics.

Magic mushrooms are the new middle class drug of choice. This week, the movement to legalize magic mushrooms took a major step forward.

What the dormouse said…

Oregon activists announced June 29 that they have secured more than enough valid signatures to qualify a pro-psilocybin initiative for the November ballot. The initiative seeks to legalize psilocybin fungi for therapeutic purposes.

The Oregon secretary of state’s office has yet to verify all of the signatures, but the legalization campaign, officially known as Yes On IP34, said it has independently determined that they’ve gathered enough to qualify ahead of a July 2 submission deadline. The following tweet, posted Monday, tells the story: 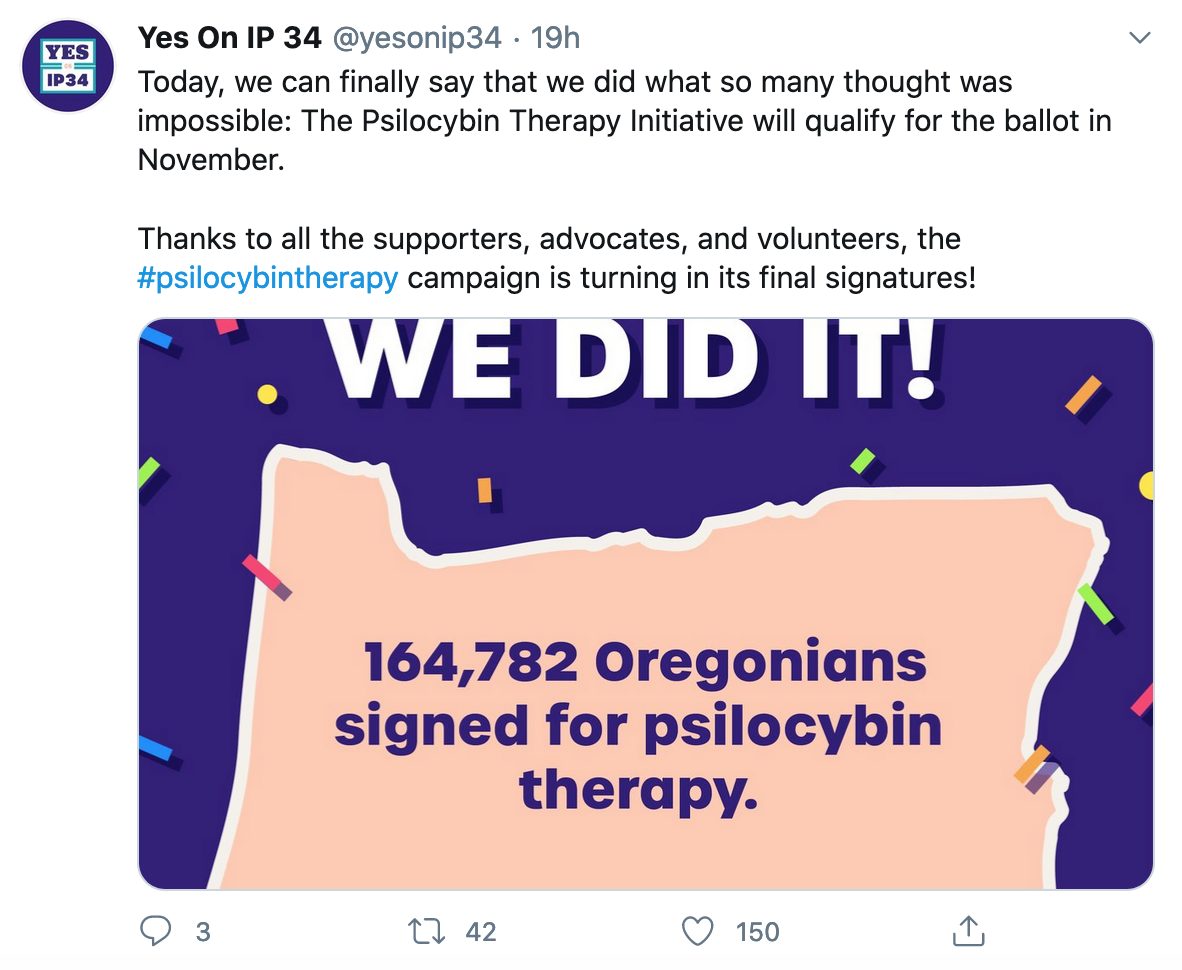 According to IP34’s website, psilocybin fungi are “uniquely effective in treating depression, end-of-life anxiety, and addiction. A recent study from NYU showed that psilocybin therapy reduced depression and anxiety with cancer patients with 80% of patients, with few side effects.”

Denver, Colorado last year became the first jurisdiction in the United States to decriminalize magic mushrooms. The historic legal change enacted on May 7, 2019 triggered a cultural earthquake throughout the country and spawned an exciting investment theme.

The development this week over the Oregon initiative is one of the latest examples of the accelerating success of the psychedelics reform movement.

Inspired by Denver’s example, the Oakland City Council last year voted in favor of a measure to make a wide range of psychedelic substances among the city’s lowest law enforcement priorities. The Santa Cruz City Council quickly followed in Oakland’s wake. In more than 100 cities across America, activists are working to decriminalize or legalize magic mushrooms and other psychoactive substances that are illegal at the federal level.

With those semantic distinctions in mind, here’s a partial roundup of notable activity nationwide to legalize/decriminalize cannabis and/or psychedelics.

Montana activists recently turned in more than 130,000 signatures to qualify a pair of marijuana legalization initiatives for the November ballot. The first, I-190, would legalize cannabis in the state for adults as well as establish a regulatory framework for cultivation and sales. The second, CI-118, would set the legal minimum age for purchasing, consuming, or possessing cannabis at 21.

Nebraska activists are approaching a deadline next month to submit signatures for a proposed medical cannabis initiative.

A Vermont lawmaker has introduced legislation to decriminalize psychedelics.

Washington, D.C. advocates are in the final stages of collecting signatures for a psychedelics decriminalization initiative.

It all adds up to enormous momentum for companies involved in marijuana and psychedelics. This year, the first biotechnology firms to develop medical treatments from psychedelic drugs such as psilocybin have gone public on Canadian stock exchanges.

Our investment analysts have been researching the money-making opportunities in magic mushrooms. We’ve recently uncovered one innovative company that’s positioned to dominate this emerging industry. Early investors are lining up for big psilocybin profits, which means you should act now. Click here for our special report.

Questions about profitable opportunities in marijuana and psychedelics? You can reach me at: mailbag@investingdaily.com