If you looked at the stock market on January 1 and then slept in a cave for six months and glanced again at the market on June 30, you’d think: Hmmm. Stocks are only down 4%. Must have been an uneventful first half.

But as we know, the first six months of 2020 were among the most volatile and traumatic in market history.

A financial Rip Van Winkle would have missed a 35% decline from February’s record high and a 44% rally from March’s low. The magnitude of the first quarter’s decline made it the fifth-worst quarter since 1950, while the gain in the second quarter was the third-strongest. The first quarter witnessed the sharpest bear market drop on record.

The U.S economy contracted 5% in the first quarter. Unemployment in Q1 went from a 50-year low of 3.5% in February to 14.7%, the highest level since the Great Depression. All told, we’re witnessing the worst downturn since the 1930s.

In March and April, the U.S. lost an unprecedented 22 million jobs. In May and June, the economy added back 7.5 million jobs. U.S. payrolls grew by 4.8 million in June, the Labor Department said Thursday. The unemployment rate fall to 11.1% in June, down from 13.3% in May.

Wall Street is optimistic that a robust economic recovery is around the corner. On June 30, the three main U.S. stock indices closed the second-quarter with their best quarterly performance in decades. The Dow Jones Industrial Average ended Q2 with a 17.8% gain, the S&P 500 rose nearly 20%, and the tech-intensive NASDAQ Composite soared 30.6%.

Thursday’s unemployment report further fueled optimism that the worst of the pandemic is behind us. Stocks ended the shortened July 4 holiday week in positive territory (see table). 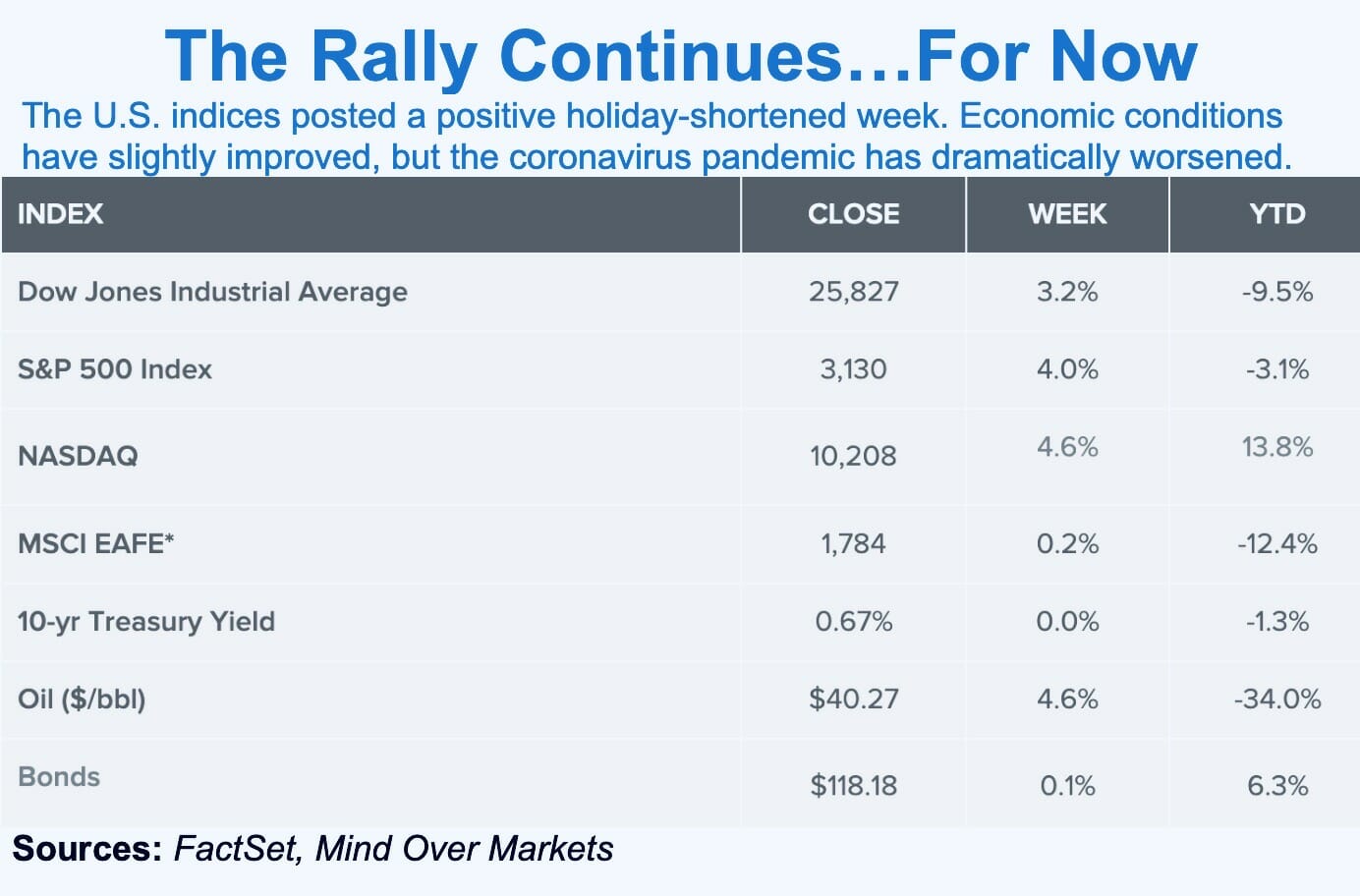 So why am I so gloomy about the stock market’s prospects for the rest of the year? For starters, the supposedly solid June jobless report is a mirage. It largely reflects laid-off people returning to their old jobs. New jobs weren’t created and we’re still witnessing depression-era unemployment levels.

What’s more, it’s clear to me (but not to the mainstream media) that the government’s jobs data are undercounting unemployment. For the last three jobs reports, a substantial number of workers were reporting that they were absent from their jobs for the entire week for “other reasons.” That probably meant they were temporarily out of work because of COVID-19, but they weren’t counted as unemployed.

Unless COVID-19 cases start to go down, the jobs market won’t properly recover. Health experts largely blame the surge in cases on Americans refusing to wear masks or not following social distancing rules, as states lifted their lockdowns over the past few weeks. Premature re-opening will turn out to be self-defeating, as states go back into lockdown and consumers get spooked all over again.

The coronavirus doesn’t care about political rhetoric or whether you’re going stir crazy in quarantine. COVID-19 is a mindless predator and it’s running rampant. Consumers account for about 70% of gross domestic product and they’re understandably hesitant to resume their pre-pandemic habits.

The much-ballyhooed June jobs report is a lagging indicator; it’s an outdated snapshot of conditions in mid-June when states were reopening. A lot has happened since then. Coronavirus infections have skyrocketed in several states and many governors have rescinded re-openings.

Beneath the headline numbers for June, there’s another disturbing trend: an increasing number of layouts are permanent and not temporary.

Read This Story: After The Q2 Party, Investors May Face a Hangover

Ironically, last Thursday’s jobs report is likely to exacerbate the economic downturn, because it’s just “good” enough to kill political interest in further fiscal stimulus. But we have a long way to go before we get back to pre-pandemic levels of unemployment.

The reason we’re suffering a recession in the first place is the coronavirus pandemic. The rapidly spreading virus isn’t under control…it’s in control. Hospitals in some of the new coronavirus hot spots in the South and West are overwhelmed and operating in crisis mode.

Partisan tribalism is alive and well. Polls show that most Democrats are worried about the virus and view it as a growing danger; for Republicans the converse is true. But when it comes to COVID-19, be wary of politicians altogether. The pandemic has become highly politicized. Simply look at the hard data and come to your own conclusions.

To date, more than 11 million people have tested positive for COVID-19 around the world and more than 534,000 have died. New coronavirus cases in the U.S. have surged to their highest level in two months and are now back to where they were at the peak of the outbreak.

Over the July 4 weekend, scientists warned that the disease can be spread through the air. Previously, it was thought that the virus spread primarily from person to person through tiny droplets from the nose or mouth, which are expelled through coughing, sneezing or speaking. Airborne contamination via inhalation makes the virus a greater threat.

We face a long, hot slog this summer. Investors who think the coronavirus is waning and the economy will soon come roaring back have reached the “lying-to-themselves-and-believing-it” stage.

However, if you’re determined to stay invested, turn to marijuana. No, not for escapism, but as a recession-resistant investment. My duties at Investing Daily include overseeing a publication called Marijuana Investing Daily. Rarely in my long career covering the markets have I seen a bigger investment opportunity than the legalization of cannabis.

The legalization of marijuana is a social, political and financial revolution that’s making early investors rich. And here’s the kicker: the coronavirus pandemic is actually fueling consumption of recreational and medical marijuana.

Cannabis investments confer market-beating potential and they’re a must for your portfolio. But the key is finding the right pot stocks.